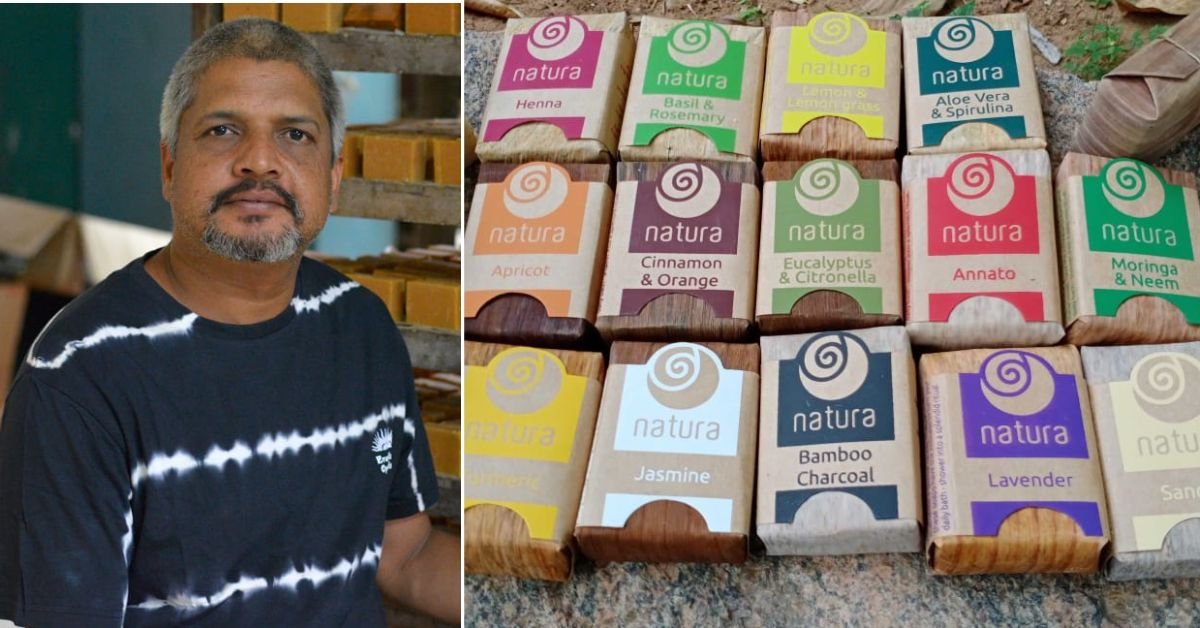 Harish Chandra, came to Auroville in 1993 and never left. Here’s how he built Natura, an organic self-care brand that focuses on natural products including soaps made of neem, coconut oil, moringa and more.

As the sun rises over Auroville, in Tamil Nadu, Harish Chandra, a native of Uttarakhand gets started with his day.

The routine has been consistent for the past 30 years for Harish who came to the town when he was just 18, to study textiles and handloom as part of an exchange program by the Sir Aurobindo Ashram.

Speaking to The Better India, Harish says while he entered the town in 1993 thinking he would stay for a maximum of six months, he never went back and Auroville became his home.

The textile program that he was engaged in had such an impact on him that he decided to build the rest of his life and career here. Today, the result of that decision is his venture Natura which sells a range of homegrown natural self-care products.

The start of an organic brand

It is an interesting story that made him shift his focus from textiles to the self-care industry.

Recounting it, Harish says in 1998 two foreigners visited Auroville with a bar of soap and a promise.

At the time, homemade soaps seemed a luxury of sorts as the Indian market was filled with chemical variations. The homemade soaps that the foreigners brought with them had the town intrigued, at how natural soaps could smell so floral and nice.

So enthused and intrigued was Harish that he decided to experiment in his own home with plants and oils from the nearby gardens and create an ayurvedic version of soap.

Reminiscing the journey, Harish says, “The transition from handloom and exporting garments to now making soaps were very natural, and in time I built a venture Natura out of my experiments.”

Natura was founded in 2000 with a team of around five people from the nearby areas in Auroville and a manufacturing space of 4,000 sq ft.

The small business had a simple aim: to make natural soaps.

All ingredients are ‘edible’

Explaining the list of ingredients, Harish says the major one is coconut. “Coconut is prevalent in south India and Tamil Nadu. Along with this, I also used castor oil, sesame oil, neem powder, rosemary, apricot, almonds, and organic cocoa butter,” he says.

He adds that he uses moringa for the soaps while tulsi and basil are essential oils that go in.

“I do not use refined oils, and thus I sometimes tell my customers that the ingredients that go into my soaps are even better quality than what is found in the kitchen,” he quips. The soaps have a shelf life of 2 years.

The process of creating a single bar of soap is tedious owing to the organic way of production.

“We use a cold-pressed method to make the soaps,” says Harish, adding that the most crucial part is calculating the ingredients that go into each one.

“For instance, my experiments made me realise that the amount of neem that goes into the soap is very minimal.”

Harish managed to come up with more than 30 variations of soaps.

The soaps once formed in moulds are kept in a huge enclosure on racks where ventilation takes place, and then the curing process happens.

Harish recounts that before the pandemic they would pack the soap bars in plastic but they later began using dry banana leaves instead.

This while sustainable, proved to be a challenge during the monsoon, as the leaves would degrade. Hence, Harish decided on using butter paper or sometimes even glass jars to package and sell the soap.

He adds that Natura aims to have a zero-waste process and hence the leftover soaps are ground into laundry powders that can be used for the daily washing of clothes. Harish has also prepared an activated tooth powder made from charcoal and bamboo.

The manufacturing unit can make 40,000 soaps per month and Natura sees orders of around 800 soaps every day. Their products are sent to Bengaluru, Pondicherry, Chennai, Kolkata, Himachal Pradesh and Mumbai.  Their online platform ships internationally.

The products are priced at higher rates compared to market standards as they are made without chemicals. While 1kg of the laundry powder retails for Rs 500, the soap bars start at Rs 150, and the tooth powders start at Rs 300 for 30 g.

However, Harish says a challenge that he faces is people expecting the products to be priced at lower rates.

“This isn’t possible as the nature and ingredients of our soaps are different from those which are sold in the market,” he says, adding, “In the market, you can buy two soaps for Rs 20, but I use coconut oil and herbs in the soaps that make it luxurious.”