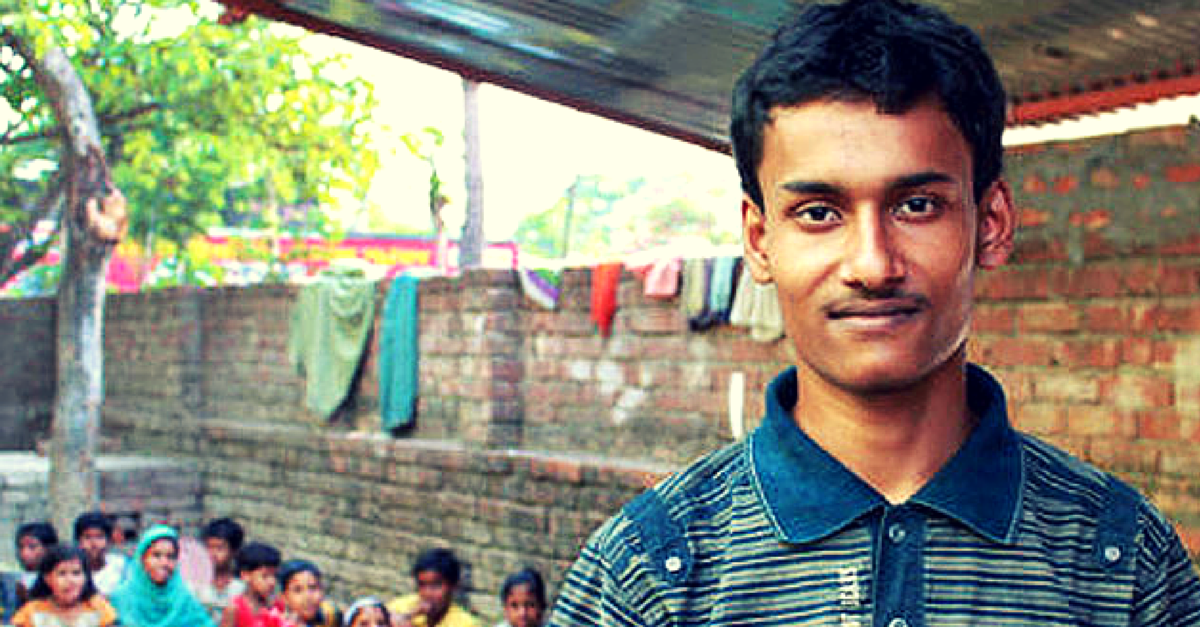 A nine-year-old took the responsibility of teaching whatever he learnt in his own school to other kids who were not fortunate enough to get an education. Here’s what happened.

Babar Ali was nine when, one day, while returning from his school, he saw a few kids working in the fields. The next day too, he saw that the kids were not in school but helping their parents at the farm by doing odd jobs.

“I realised they had never attended school due to lack of finances. Plus, our village didn’t have good schools. Even I used to travel about 10 kms up and down every day to attend school,” recalls Babar Ali, who is from Murshidabad in West Bengal.

Babar did not recognise at the time that his concern for these children would change not only his own life but that of hundreds of other children who did not have the opportunity to attend school. He was lucky that his father, a jute trader, could send him to school, an opportunity not many kids of his age in his village had.

At nine, when most kids cannot even do their own homework, Babar started a school of his own and became probably the youngest headmaster in the world.

“I was a class 5 student then. I got together eight young kids and started teaching them after returning from my school. I just thought I’ll teach them what I learnt in class,” says Babar.

This is how Babar’s makeshift school started under a guava tree in his own backyard where, everyday, a few village kids would wait for him to return from his school. He would, like a dedicated teacher, come back straight to his house from school and talk about what he had learnt there.

Babar would take broken pieces of chalk from his school after classes, and use terracotta tiles at home to make a blackboard. He didn’t require any fancy resources to run his school; all he needed was his students’ passion to study.

“When my teacher found out about my home school, she started giving me a full box of chalk,” Babar says with a smile.

The students too, enjoyed their young teacher’s classes. As they did not have any resources like pens, pencils, notebooks, or even a syllabus, they used newspapers as reading material. “I just wanted to impart education somehow. I didn’t care about the syllabus, I thought if they learn any small thing, it will be an achievement,” says Babar, who was quite a thinker.

Gradually, Babar’s school became more popular and more students started joining him in his backyard. “Sometimes, I would not even have lunch, I would just come back from school and directly start teaching them,” he says. As he saw the kids regularly attending his school, he took a few half-used notebooks from a ragpicker for his students.

To ensure that the students regularly attended class, he would often buy them sweets from his own pocket money.

To convince their parents to send them to his school, he would collect some rice from his relatives and give it to the parents — such was this nine-year-old’s dedication to impart education! He would also organise various activities like sports, dance and music to make school more fun for the students.

“I couldn’t afford to miss school because what would I teach my kids if I didn’t learn something there? I felt responsible for the kids I was teaching,” he says.

However, Babar’s father began to worry that his son may be neglecting his own studies. But such was Babar’s dedication that he was able to balance both teaching and learning, and eventually his father had to relent and let him continue running his school.

Today, Babar’s school has about 300 students — with a balanced boy to girl ratio.

He is 21years old now, has six teachers working with him, and also has 10 volunteers who contribute to his school on a regular basis. His school now goes up to class 8.

“It wasn’t easy. Especially because I was so young. People would often doubt my intentions and say that I was trying to mislead the kids. But it was because of my students’ belief in me and my family’s support that I managed to continue my work,” he says.

For a long time, Babar ran the school using his own pocket money and some support from his family. But then, as his work started becoming well known, the Ramakrishna Mission began to help him out and gave him basic necessities like books and stationery for the kids. He has also started receiving a few donations to run his school now.

Babar, who has completed his graduation in English, is now pursuing a Masters of Arts degree.

He still manages to find enough time to support all his students and is proud that six students from his first batch are now part of his own school as teachers.

“My school is run completely by volunteers. I don’t charge anything from the kids and I am also unable to pay anything to the teachers. It is only a passion towards education that is binding us all together,” he says.

Babar has indeed come a long way, but he has plans for the future too. He says he wants to create a “dream school” for kids from underprivileged backgrounds and give them good facilities for free.

“I believe that if you are passionate about something then you can achieve anything. Age, finances, other hurdles, they just don’t matter and eventually everything works out,” he concludes.

You can support this young headmaster by donating to his cause.