20-YO With Asperger’s Syndrome Creates Stunning Paintings You Have to See! 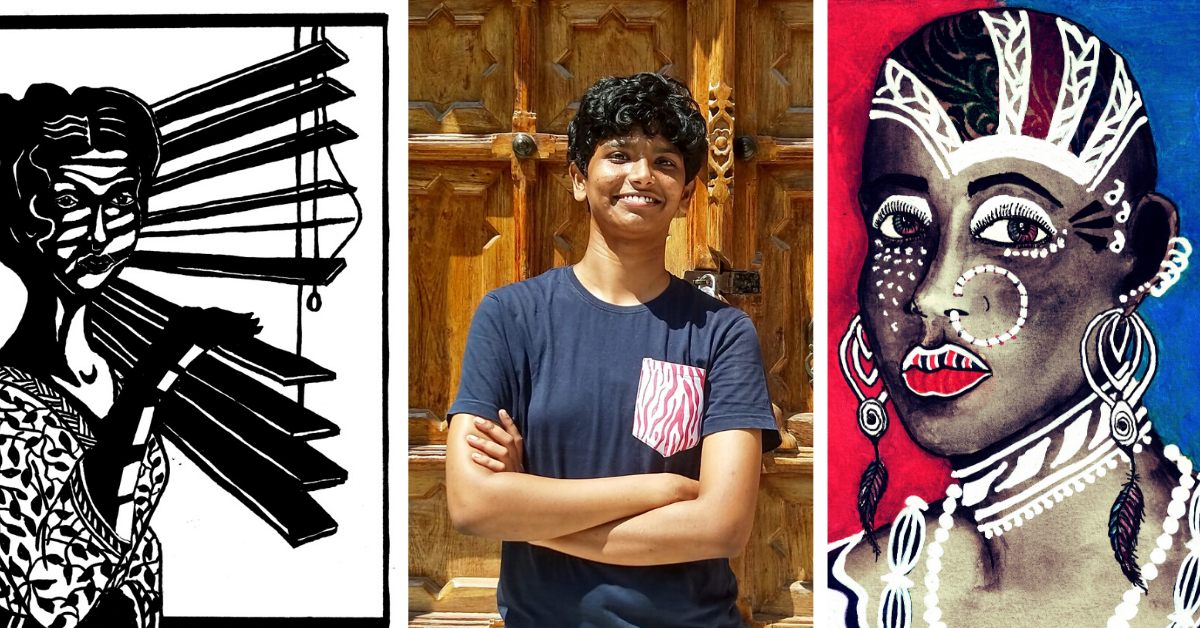 Betsy's paintings and written works have found their way to publications like The New York Times, Elan Literary Magazine, Alexandria Quarterly and After The Pause.

For Betsy Jenifer hailing from Vellore, Tamil Nadu, communicating and socialising with others had always been a struggle. Up until four years ago, the 20-year-old did not know that she had Asperger’s Syndrome. Struggling to communicate her feelings, a five-year-old Betsy had turned to art as a form of escape.

“When I couldn’t convey an idea properly through verbal communication, I would turn to my paintbrushes,” she tells The Better India (TBI).

Once Betsy came to know about her condition at the age of sixteen, she decided to continue her schooling at home. Life slowed down. And it took years for the teenager to realise that she could not let the syndrome bind her to one place.

Betsy decided to take back the reins of her life.

Today, Betsy is a final year literature student at Women’s Christian College, Chennai (WCC) and an artist whose paintings and written works have found their way to publications like The New York Times, Elan Literary Magazine, Alexandria Quarterly and After The Pause.

It’s not every day that you come across an inspiring story from your own alma mater. So it was also a truly heartwarming moment for me to know that WCC had given a platform to Betsy to bring out her full potential, just as it had done for me.

Talking to her was like a walk down the memory lane and during our conversation, I found out that for Betsy art is life – a constant companion that has given her the freedom to express herself in ways that the society wouldn’t.

This article speaks of a determined young woman who proves to us that art can be the perfect way to effectively socialise and communicate with society.

“I have vivid dreams every day and images and patterns cross my mind often. In ‘In my Head’, the picture of a boy whose skull is cut open and a ghost wafting out of his brain was something I saw first thing when I woke up one morning,” Betsy tells me.

It seems the young painter faced many such persistent ghosts throughout her childhood. Her inability to communicate clearly with children of her age may have exposed her to ridicule very early in life. Also, our society is not known to take kindly to any condition which sets apart a person from others.

Betsy learnt young to ignore and move on. She takes strength from her roots, traditions and her creative expression.

“The portrait that seems to be of an African tribal person, now tells me to embrace my grassroots and to hold on to my native culture no matter how far I may stray away from it,” she says. Betsy believes that because of her Asperger’s she has an ability to think and imagine scenarios in a way that ordinary people can’t.

She especially loves drawing cityscapes with colourfully diverse buildings. “I have particularly loved cartoons like “Chowder” and “Foster’s home for imaginary friends” due to their imaginative illustrations of buildings. This definitely kindled my imagination, toward detailed and meticulous drawing,” shares the artist who still has a lot to tell the world through her art.

The versatile young woman is not only an artist but also a writer. She wrote a novel and has entered it on NaNoWriMo, an online creative writing platform and has also published her written work on various other publications like Teen Ink, Polyphony H. S., Sprout, Sugar Rascals and Canvas literary journal.

Throughout her childhood, Betsy was convinced that she was not talented or good enough for the world, but her determination and her passion for art has given way to many beautiful paintings proving that being “different” from others is just a matter of perception.

Below we have some of Betsy’s artwork for you to enjoy.