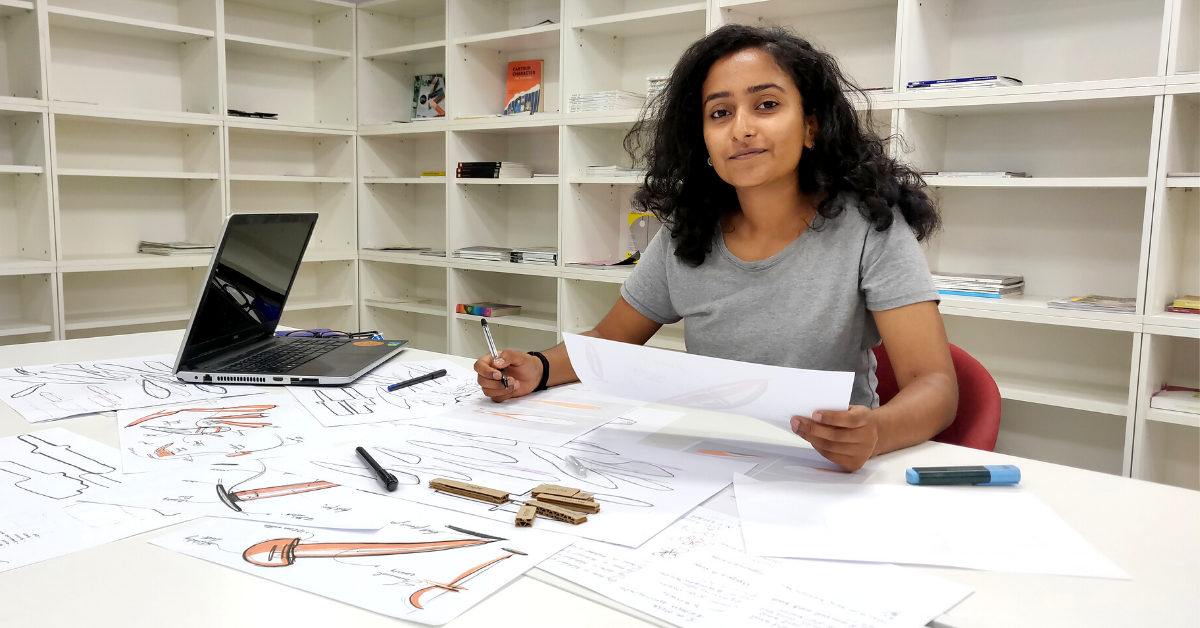 “Since many of such classroom projects never get this sort of exposure, I decided to enter the competition. Even if it would get some visibility, I knew I would get some collaborators to work with and that was basically my main intent.”

Ashwathy Satheesan, a 23-year-old graduate from the National Institute of Design (NID), Ahmedabad, was the recipient of the James Dyson Award 2019 for her innovation ‘Fleo’. It is a stabilising pen designed to help people with Parkinson’s tremors to write and draw.

The Better India caught up with Ashwathy to know more about her innovation.

“I wanted to bring about a change using design. For this particular project I visited several hospitals and public spaces. I found that with design as an aid, I can help people who live with Parkinson’s,” says Ashwathy.

Looking to brighten up a space at your home? Check out these beautiful recycled table lamps

Parkinson’s is a progressive neurodegenerative disorder and estimates say that over 10 million people live with Parkinson’s disease in the world. It was James Parkinson, a British physician, who first wrote about the symptoms of the disease in 1817.

One of the most common symptoms of Parkinson’s is the tremors in the hands which makes it difficult for people to perform everyday tasks.

“From a very young age I had been interested in arts and crafts. But after class 11, I started looking at design as a possible subject. Being at NID has been a very enriching experience,” says Ashwathy.

Fleo is the result of a project that Ashwathy worked at during her third year in NID. She also informs that NID always encouraged the students to take up socially relevant and impactful topics which helped steer her project in the right direction.

“During my research I found that people with Parkinson’s mostly find it difficult to perform simple tasks like writing and signing their name. The pen I designed works on gyroscopic principles, for example, when a spinning object tries to resist its motion away from its axis, iin the similar way, the pen resists the tremors and allows you to write in a controlled way,” shares Ashwathy.

Fleo is battery-operated, rechargeable, has ergonomic support and gives a confident grip to the user.

During her research phase, Ashwathy visited a Parkinson’s club in Ahmedabad and met several people who had the condition.

“All my development stage was spent here and I got very valuable inputs from them on what they wanted. I met an artist who could not even hold a pencil after he was diagnosed with Parkinson’s. It was very frustrating for him. This propelled me to work harder on my device.”

James Dyson Award is an online open contest where people from more than 27 countries participated.

“Since many of such classroom projects never get this sort of exposure, I decided to enter the competition. Even if it would get some visibility, I knew I would get some collaborators to work with and that was basically my main intent.”

Apart from the prestigious award, Ashwathy has also won a cash prize of 2,000 pounds and intends to use that to further develop her device. “While the project lasted as per the time frame of the course, I feel there is still scope to continue work on it and make it better. The feedback I got from potential users has been greatly beneficial,” says Ashwathy.

If you are a design student or a designer working on innovative products, do check out the James Dyson Foundation for further details on the award.