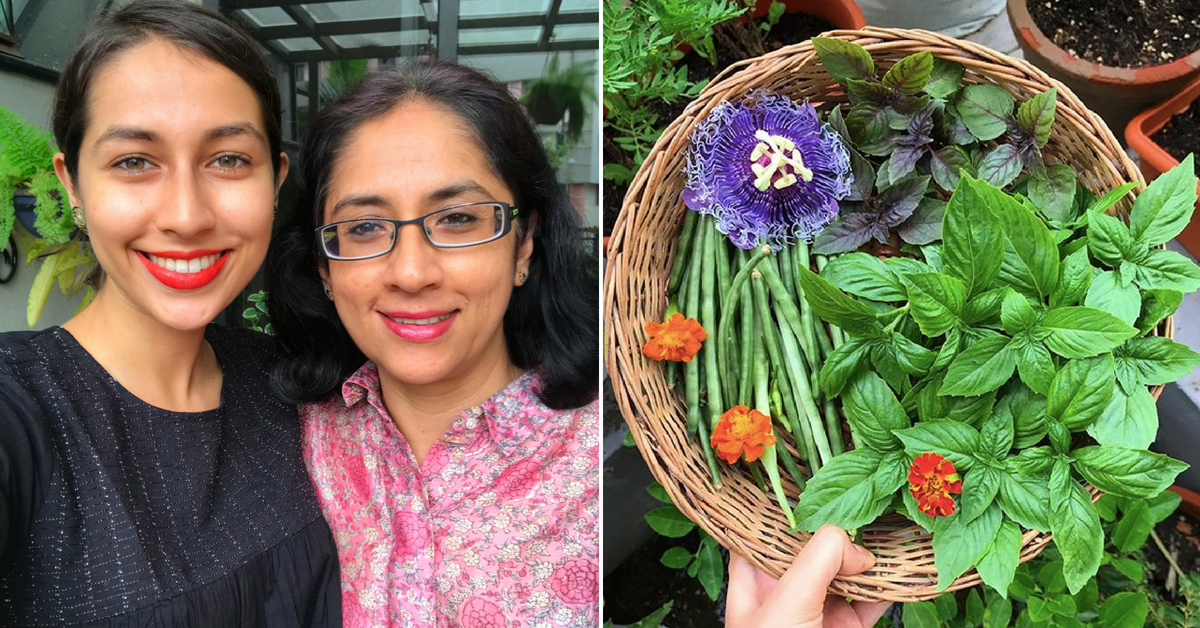 A multidisciplinary designer and illustrator, Maithili Panikar’s first tryst with gardening began after being inspired by a project she was working on which included designing play stations for children using natural elements.

Welcome to My Garden Series by The Better India, where we feature stories about gardening and homebound farming initiatives submitted by our readers. If you have any stories to share as well, write to us at editorial@thebetterindia.com.

Maithili Panikar, a resident of Kochi, was always interested in gardening, and one could say that she had inherited this fascination from her mother, Bindu, who is a passionate gardener and has an enviable ornamental garden.

A design graduate from the Srishti School of Art, Design and Technology in Bengaluru, the ‘garden’ city, Maithili’s first tryst with gardening began after being inspired by a project she was working on which included designing play stations for children using natural elements.

For the next two years, she put her heart and soul in the pursuit and managed to grow everything from herbs and vegetables to even ornamental plants, well-within the peripheries of her living space.

However, Maithili had to bid goodbye to this green space that she had lovingly created and nurtured, as she was moving to Kochi, but before she left, she ensured that her plants found a new home with her friends, who were as inclined towards gardening and plants as she was.

In Kochi, where she currently lives with her parents in an apartment complex, Maithili found that a lot of common spaces in the residential premises were left unused and she wondered if they could be put to better purpose.

After pitching the idea and receiving consent from the residents of the apartment complex to revamp one such common space into a community garden, Maithili and Bindu got to work and with the nurturing touch of their green thumbs, the garden today has organically grown veggies and herbs ranging from many varieties of gourds, basil, eggplant (brinjal), okra (ladies finger), beans, spinach, red amaranth, peppercorns, Spanish tomatoes, passion fruit, curry leaves and even the Chinese potato, which is locally known as ‘koorka.’

“I could call myself a relatively new urban gardener who has just stepped into the arena. Right from a very young age, there was always this fascination with the environment, science and the intricate machinery of nature. Those projects did have a significant impact in my outlook towards gardening, which I now believe plays a great role in community building as well as helps one understand consumption in a holistic perspective,” says the 25-year-old gardening enthusiast.

Since there is limited space, Maithili has been growing the plants in containers. However, she finds this to be a fun challenge.

“As much as urban living spaces come with their own benefits and convenience, what deters most people from gardening is probably the spatial constraints. For me, it is this very lack of space that gives the push to think creatively and figure out how one can grow plants within these walls,” she says.

Although she can always turn to her mother for all gardening related tips and queries, Maithili also follows various groups and collectives on social media that brings together young and old urban gardening enthusiasts under one platform, who share their knowledge as well as experiences.

It is through such connections that Maithili has sourced and collected heirloom seeds, and the mother-daughter duo has successfully harvested them as well. In fact, the tomatoes that she has been growing are from the seeds she had collected from a farm in Spain, where she had once volunteered.

You may also like: 17+ Organic Veggies on 7th Floor? Kanpur Lady Has Been Growing Them for 19 Years!

While people in Kerala are already taking up terrace farming to the next level —almost every rooftop and other contained setups have at least one type of vegetable being grown in grow-bags—Maithili feels that this is indeed a good sign and if the concept of community farming becomes popular, nothing could be better.

“In India, a strong sense of community dwells deep within every individual, and I truly believe that community gardening has a great potential, and we really need to tap into it. When an entire community is involved in something as rudimentary as farming, not only does it bring people together and help children have a holistic development, it also makes us closer and sensitive to our environment,” explains Maithili.

Though the idea was conceived as a community garden, it is just Maithili and Bindu who have been actively partaking in its development—something Maithili hopes to change overtime by involving people from the community in the actual process.

A multidisciplinary designer and illustrator in professional life, Maithili is also a practitioner of permaculture, a philosophical system of agricultural and social design principles that is centred on simulating or directly utilising the patterns and features observed in natural ecosystems.

“What makes permaculture different from the sustainable way of farming is that we focus on an agricultural system that is regenerative than being just sustainable. It is a way of thanking and giving back to nature from which we take so much from,” she says.

A year might sound little short for most, but for Maithili, it has been a journey of experimenting and experiential learning, and she has only started. “Gardening will forever be something I want to be involved in, and my ultimate dream is to leave behind a garden at every place I live in hereafter,” concludes Maithili.

You may also like: Chennai Boy’s Love for Gardening Now Helps City Folks Grow Their Own Food!