Among the grittiest women in Indian history, Rani Avanti Bai's unflagging courage and indomitable spirit are at par with the legendary Laxmi Bai of Jhansi!

In a park in Meerut stands the beautiful statue of forgotten warrior queen astride a horse — Rani Avantibai of Ramgarh.

Among the grittiest women in Indian history, her unflagging courage and indomitable spirit are at par with the legendary Rani Laxmi Bai of Jhansi, Rani Rudramma Devi of Warangal and Rani Abbakka Chowta of Ullal. Yet, little is written about this valiant leader or her fight against the British during the revolt of 1857.

Here’s the untold tale of how Rani Avantibai etched her mark in the annals of history. Born in 1831, Avanti Bai was married to King Vikramaditya Lodhi of Ramgarh (today in Mandla district of Madhya Pradesh) at an early age. Fiercely independent as a young girl, she was well-trained in sword fighting, archery, cavalry, military strategy, diplomacy and all other subjects of statecraft.

This was why, when Vikramiditya fell into ill-health, it was Avanti Bai who rose to the occasion and took over the reins of Ramgarh’s administration. Even after the king’s death, the Lodhi kingdom continued to flourish under its queen’s able guidance.

However, the wily British refused to recognise Avanti Bai as the legitimate ruler of Ramgarh. The reason? Doctrine of Lapse. Introduced by Lord Dalhousie in 1848, the doctrine of lapse was an arbitrary annexation policy that allowed the East India Company to snatch away any Indian kingdoms whose ruler died without a direct heir.

In keeping with their land-grabbing intentions, in 1851, the British declared Ramgarh as a ‘Court of Wards’ and appointed their own administrator for the kingdom in place of Avanti Bai. Incensed at this unjust and insulting decision, the furious queen threw the administrator out and declared war against the British.

Avanti Bai’s next step was sending urgent emissaries to the rulers of neighboring kingdoms to join her in the war against British subjugation. In her strongly-worded letters (that were accompanied by a set of bangles), the feisty queen wrote:

“If you think you have a duty towards our enslaved motherland, raise your swords and jump into the war against the British. Otherwise wear these bangles and hide your self in houses.”

Unsurprisingly, Avanti Bai’s appeal succeeded in rousing a wave of revolution in the central provinces. By 1857, the entire region had joined the armed rebellion. Leading from the front, the fearless queen herself raised an army of 4,000 and personally led it against the British troops.

Her first battle took place in the village of Kheri. Avanti Bai’s masterful battle tactics ensured that the British troops were handed a stunning defeat. 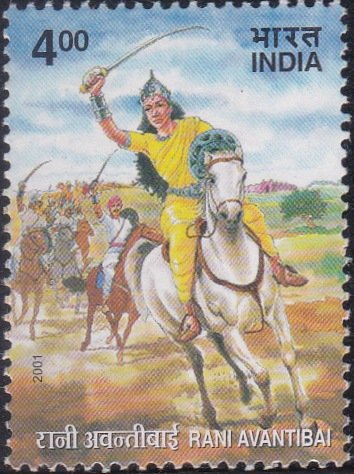 Expecting an easy victory, the stung British assembled their full force and launched a massive attack on Ramgarh, setting the citadel on fire. As such, the queen was forced to move with her family to the thickly forested hills of Devharigarh

However, Avanti Bai was not the one to give up without a fight. Using guerrilla warfare tactics, she attacked the camp of British General Waddington, plunging the camp into chaos. But unfortunately, her incredible fighting spirit was no match for the might of the British military machine in all its brutal strength.

Surrounded by British troops and facing the prospect of capture, Avanti Bai chose to sacrifice her life rather than to surrender to the enemy. On March 20, 1858, she killed herself with her own sword.

In the years that followed, Avanti Bai continued to live on in the folk culture of the region – even as her splendid story was slowly erased from history books.

The good news is that, in the recent years, her story has been gradually coming to public attention. The Rani Avanti Bai Lodhi Sagar dam in Jabalpur ( a multi-purpose hydro-electric project) has been named after her. The Department of Posts has also issued a stamp in her honour.

But surely we can do more!

Also Read: The Forgotten Story of Rani Tarabai, The Indomitable Warrior Queen of the Marathas