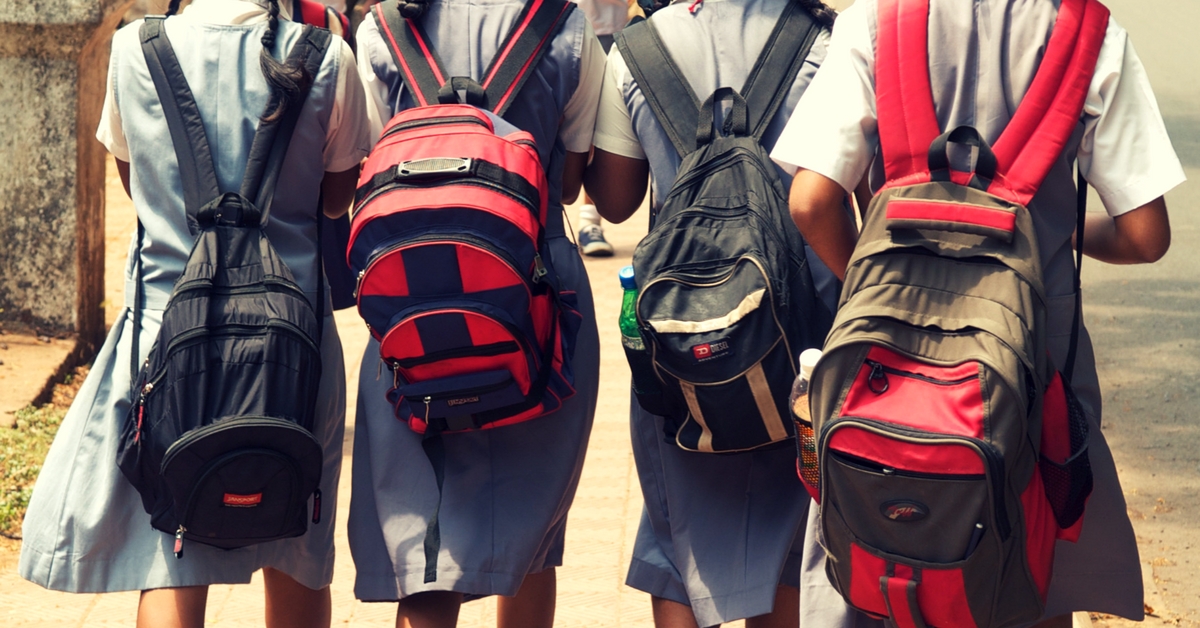 A 2016 study carried out by the Associated Chambers of Commerce and Industry in India under its Healthcare Committee estimates 68% of pre-teen Indian school children might suffer from mild back pain, which can develop into chronic back pain, and later into a hunchback.

The survey, according to The New Indian Express, also noted that over 88% of children, in the age group of 7-13, carry more than 45% of their weight on their backs.

This study was carried out among more than 2500 children and 1000 parents in major cities. The findings also included startling facts such as most students mandatorily carry over 20 textbooks and exercise copies daily, together with sports kits and other equipments on certain days.

Children aged 8-15 should not carry more than a three kg weight on their back, because it affects their soft, developing spine.

Heavy school bags are responsible for neck and back pain, according to paediatrician Apurba Ghosh, the director of the Institute of Child Health, in The Telegraph.

The Children’s School Bags (Limitation on Weight), Bill of 2006 states that the weight of a school bag must not exceed more than 10% of the child’s bodyweight. It also directs respective State Governments to ensure that schools provide lockers for students, ensure that schools adhere to the standards of measurements for bags, and students use both straps for carrying bags.

In addition, it states terms that require teachers to inform students of the books required a day prior, and the students should be taught how to pack bags so heavy loads can be kept close to the body.

Individual efforts have been taken to ensure children are less burdened.

In July 2017, the Telangana government directed school authorities to ensure bags don’t exceed five kgs in weight, according to The Times of India.

In Bengaluru, thanks to the State Department of Public Instruction in Karnataka, one day a week is designated as ‘No Bag Day’, when children don’t have to carry books to schools, according to The New Indian Express, in December 2017.

In Kolkata, as early as 2012, The Heritage School school started providing children with lockers, to help them ease the school bag load, reported India Today.

In 2016, the Union Human Resource Development Minister issued a written reply to a Rajya Sabha question. The topic dealt with reducing the burden of bags. The document states that the Central Government has taken steps to reduce the curriculum load, and is focusing on child-centered, process-oriented and constructivist approach, and is doing away with learning by rote.

The document also mentions the E-Pathshala platform, launched during the National Conference on ICT in School Education held in November 2015, aims to disseminate all educational e-resources including textbooks, audio and video material, periodicals and a variety of other print and non-print materials. The platform address the issue of reaching out to a diverse student body, and providing quality e-content with free access through multiple technology platforms, i.e., phones, tablets and computers.

The sight of a small child lugging a colossal school bag is not uncommon in any Indian city.

While digitalisation of education, like the government document mentions, is a futuristic way, is there a viable way for schools to take efforts into their own hands, to reduce the loads on the backs of children?

La Martiniere for Girls School in Kolkata, has come up with an initiative to provide handouts among students in the class. The handout, only a few sheets, will contain a summary of the topic taught in class, and will have important points students can refer to while the teacher is teaching. This model is in place for students of classes I to VIII, while students of class IX and above have lockers in school, for heavier textbooks, reports The Telegraph.

Providing hand-outs before a class is a school and teacher-driven initiative. The school took this step after parents started complaining about heavy school bags on social media. The hand-outs, a concise synopsis of the lesson at hand, will effectively be able to reduce the total weight that children carry on their backs.

The need for the excess weight that children carry on their backs has been debated for quite some time. Our society is going through a lot of change. Children don’t have a lot of open facilities to play, exercise and have fun. The attraction of indoor games and electronics turns these children sedentary. The results? Weight fluctuations, low muscle strength and poor exercise tolerance.

Childhood is a time to learn, and have fun. Academics should not overshadow health. Carrying a larger-than-required school bag puts an unnecessary strain on the child’s back, affecting their musculoskeletal system adversely—more so if the bag is carried by a single strap on one shoulder.

While digitalisation of education might help cities and towns, proliferating that method throughout the country might be difficult. On the other hand, if all school teachers themselves create summaries of class concepts, it would help students immensely.

You may also like: In Kerala, Kids Walk Light to This School, Their Heavy Bags Get a Ride!

Summarised hand-outs of textbook concepts keep the students load-free, literally, and also allows them to concentrate on the chapter/concept at hand. For example, if they are learning about nouns one day, why carry the entire Wren and Martin that day?

School needs to be a fun, enriching environment, which children should not need to carry inhuman amounts of weight on their backs, to attend.