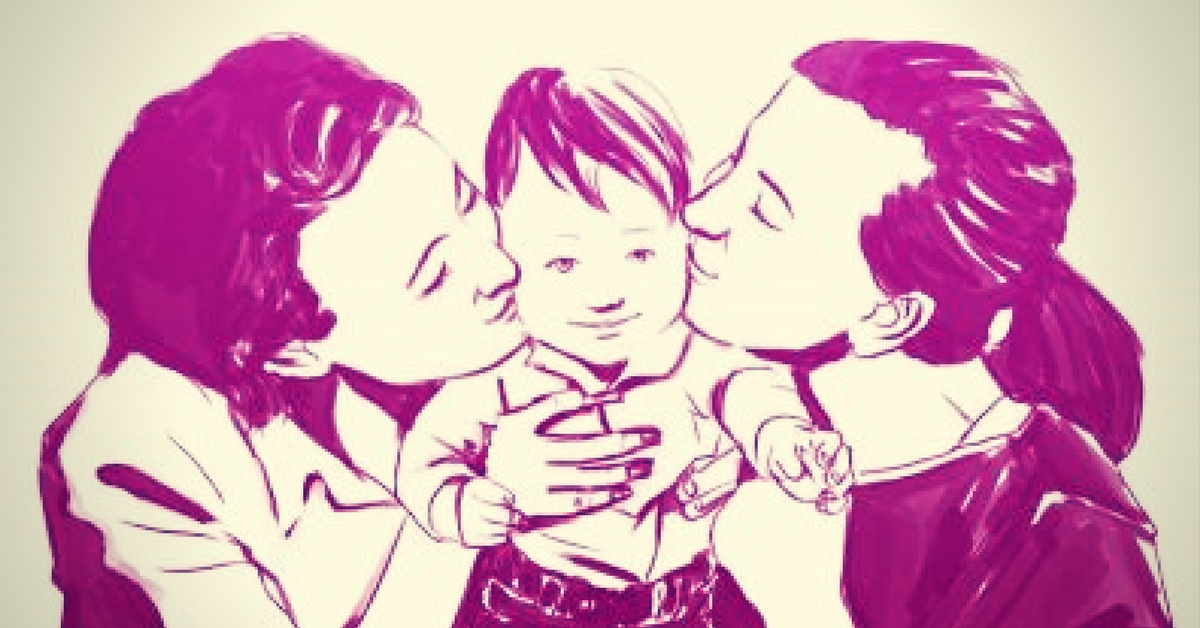 A Parliamentary Standing Committee has reviewed the new Surrogacy (Regulation) Bill 2016, and has raised many concerns. Maadhyam takes a look at all sides of the issue.

With a view to regulate surrogacy practices in India and to protect the interests of surrogates, The Surrogacy (Regulation) Bill was introduced in the Lok Sabha in November 2016. The Bill was sent to the Parliamentary Standing Committee on Health and Family Welfare for review.

Meanwhile, Maadhyam undertook a stakeholder engagement exercise and invited views from citizens, to gain the perspective of Surrogate and Commissioning Parents. The responses were shared with the Committee. After months of deliberations, they have finally come up with their report, which comprehensively addressed many concerns raised by stakeholders.

In this two part series, we detail the report from various perspectives.

The Bill allowed only altruistic surrogacy – where surrogate mothers undertake surrogacy on grounds of love and compassion without expecting any monetary benefit in return. They are entitled to only medical expenses and an insurance cover. The Bill completely prohibited commercial surrogacy.

In the engagement undertaken by Maadhyam, stakeholders were asked for their views on whether it was justified to allow only altruistic surrogacy.

Nearly 53% of the respondents replied in the negative 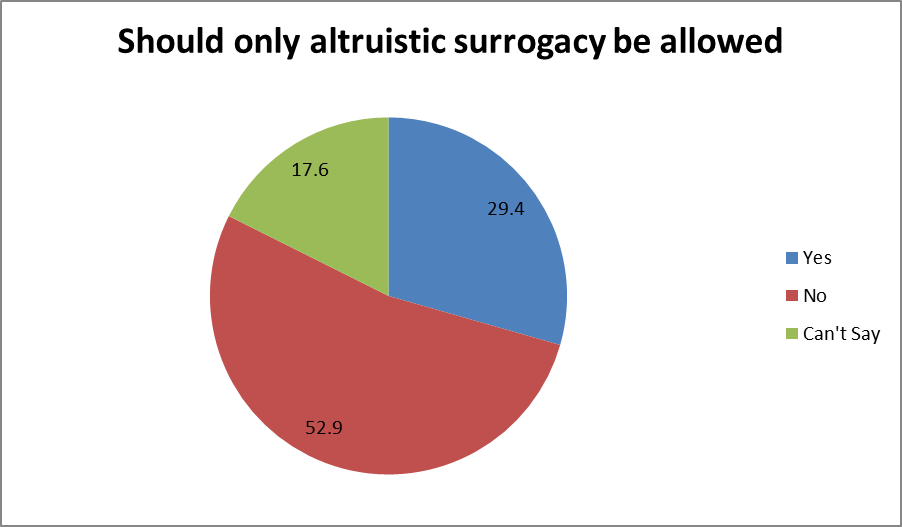 The main reasons cited by the respondents was that this would amount to a loss of livelihood for women. Also, they highlighted how a commercial contract is better suited to protect the rights of all parties involved since it is legally enforceable.

It was also suggested that a regulatory body should put in place as a safeguard.

‘The Committee is of the view that altruistic surrogacy is another extreme and entails high expectations from a woman willing to become a surrogate without any compensation or reward but a decision based on noble intentions and kindness.’.

It was recommended that commercial surrogacy should be regulated through a comprehensive compensation policy.

After taking into account the views of women who had undertaken commercial surrogacy, the Committee noted that it was seen as a means by women to economically uplift themselves and their families when other economic options were more exploitative and far less remunerative.

The Committee is, therefore, of the view that economic opportunities available to surrogates through surrogacy services should not be dismissed in a paternalistic manner.

It was also added that:

As per the Bill, the woman acting as a surrogate must be:

Further, she can act as a surrogate only once in her lifetime.

The respondents were requested to reflect on the proposition that only a ‘close relative’, a term which was not even defined in the Bill, be allowed to be a surrogate and a large majority responded in the negative. 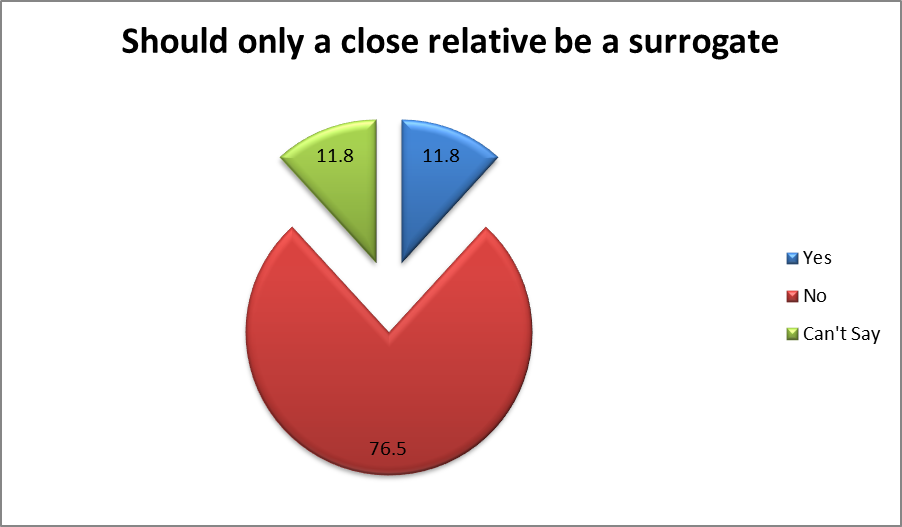 Many reasons were provided by the respondents for not supporting this provision – there is a real threat that women can be forced to undertake surrogacy for their relatives and that too without any compensation; it is likely to lead to family disputes in the future and could negatively affect the emotional and mental well-being of the child.

The report recommends for removal of close relative requirement after making following observations:

The Committee recommends raising the upper age limit from 35 years to 39 years. However, it remains silent on the issue of the marital status of the surrogate, i.e. whether single women can also be allowed to be a surrogate.

But when asked by Maadhyam that whether only married women should be allowed to act as surrogates, around 93% of responses were in negative. For stakeholders, it was a matter of independent choice depending upon physical, mental and psychological health of the surrogate and not her marital status. 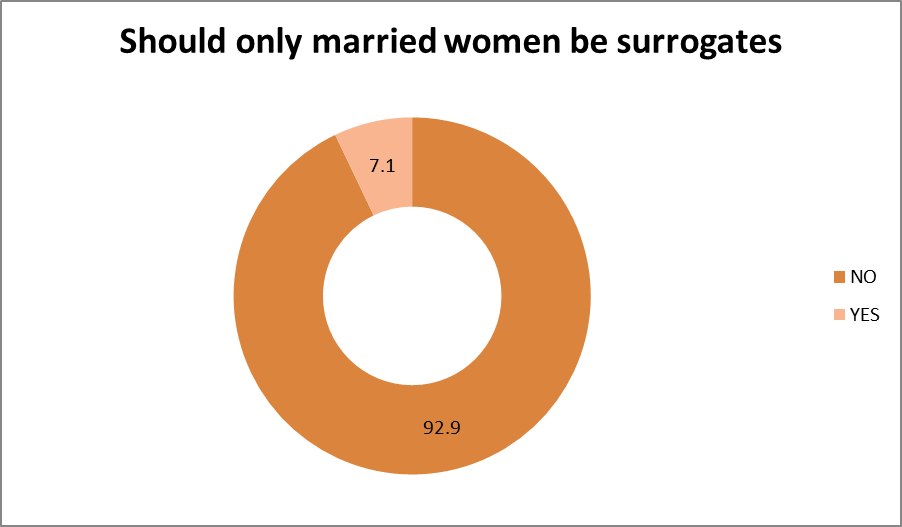 Number of times a woman can act as surrogate

The report upholds that a woman should undergo surrogacy only once in her lifetime, considering the risks and complications involved.

It asserts that surrogacy should not become a profession.

However, in case of abortion, it recommends for a clear provision in the Bill to allow the woman to be a surrogate for the second time.

In the next part of the series, we take a look at how, despite many progressive recommendations, the report also takes a regressive stand on certain matters like not allowing single persons or members of the LGBTQ community to opt for surrogacy.