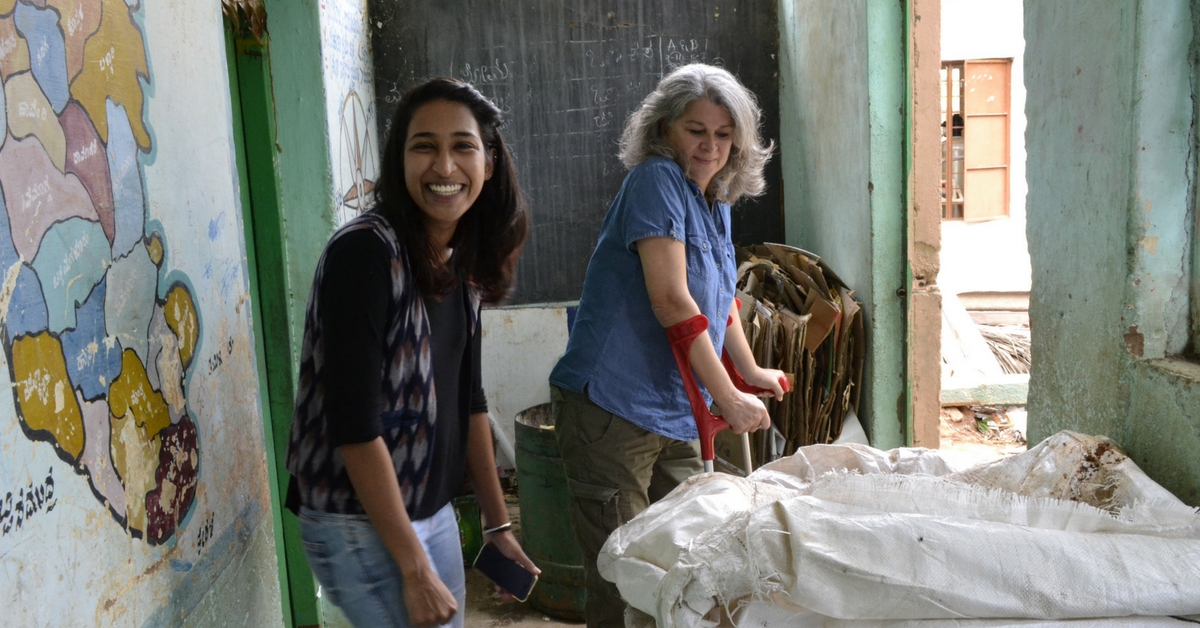 Myriam Shanker and Arushi Gupta are working to solve a waste crisis in villages around Bengaluru. Thanks to them, the waste generated from 450 households are carefully segregated, collected and eventually recycled – wasting as little waste as possible!

On a quiet Tuesday afternoon, I joined two women on a trip to Tharahunise, a village located about 30 km away from Bengaluru’s busy Majestic bus depot. The purpose? To see how efficiently this village treats its waste.

Myriam Shanker, 50, limps to her jeep with two red crutches by her side – the result of a small accident. Today, she will not be driving the vehicle that on most days deftly swerves around Bengaluru’s infamous traffic. Arushi Gupta, 25, sits beside me on this hour-long drive.

An ethnic German who identifies as Indian, most of Myriam’s work was in Hamburg’s port area, until the Duft der großen weiten welt, or the scent of the world got too tempting.

When her travels brought her to India, she was bowled over by its cleanliness. The year was 1992 – India’s economy had just opened up and the country was devoid of any western consumerism and litter she was so fed up of seeing back home.

“India was pristine!” she says. But, when she returned in 2002, the India that greeted her was very different from the one she left. The omnipresence of garbage shocked her.

“I’ve seen parts of this world that are breathtaking. It physically hurts me to see how we are destroying mother nature. And waste is one of the things that is especially harmful. That’s why I do what I do here in Bengaluru,” she explains.

Arushi, on the other hand, is Indian. She is a graduate of political science and philosophy from St. Stephens, New Delhi, with a masters in social work from the TATA Institute of Social Sciences. So how did this unlikely duo cross waste-management paths? Arushi was teaching a gender studies class at Myriam daughter’s school, when, as she puts it, was “poached”.

“What can I say? I liked her and wanted her to work with me!” Myriam admits.

Myriam Shankar and Arushi Gupta are a two member team from an organisation called The Anonymous Indian Charitable Trust (TAICT), working to solve a waste crisis in villages around Bengaluru.

The duo came up with the Ecogram Project that has helped transform how waste is segregated, collected, and disposed in Tharahunise. Now, they are on a mission to implement this model in neighboring villages.

What is the Ecogram Project?
It started in June 2016, and tackles waste disposal, soil, and water depletion in rural Bengaluru. The two women got all the 450 houses in the village to separate their waste into three categories – dry, wet, and sanitary. The segregated waste is then collected everyday in the morning by a team of waste collectors.

The system is a decentralized waste system where the garbage is segregated at source, or each house – wet waste is composted, while dry waste is collected from households and later separated into ten categories, after which it is sent to recycling plants. Sanitary waste is transferred to a bio-medical incineration plant, and what is left is sent to a landfill.

Because sanitary waste is especially difficult to treat, Myriam and Arushi are encouraging the use of menstrual cups, and the responses, they say, have been surprisingly encouraging!

Until recently, plastic was mixed with other wet waste in the village and eventually composted. The need to segregate and dispose waste correctly was urgent. Myriam and Arushi helped break that cycle.

When we reached the village, what I saw was rather idyllic. Black spots (garbage dumps in waste management speak) are few and far between, and what was most obvious were the stainless steel litter bins dotting the village. The cleanliness is a result of careful planning and impressive execution.

We go into the local anganwadi (day care center for kids) where the TAICT team was given a room to segregate dry waste. Here we found Manju, a waste segregator, sitting amid a mound of plastic bottles, cans, and sheets.

Explaining his role amid the piles, Arushi says “Nobody understands the various grades of material quite like waste collectors because they have been doing this all their lives.”

Waste is generated at an alarming rate in India. Despite the amount of trash we produce, the welfare and dignity of the informal workers involved in waste management remains at the bottom of any government’s political agenda. It is for this reason that the team chose to work with Hasirudala.

Hasirudala is an NGO that works with waste collectors, a terribly marginalised segment of society. The NGO has hired waste collectors to pick up the garbage everyday from Tharahunise. 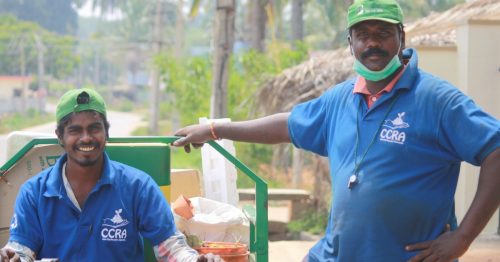 And where does all this waste go? Sadly, a lot of the dry waste Bengaluru and neighboring areas generate makes its way to illegal landmines. These illegal landmines are unscientific, emitting toxins and generating highly combustible methane gas.

“India is wasting it’s waste,” says Myriam. The team hopes that with the decentralized waste management system in place, less waste is sent to landfills.

The difference the team has made in the village is tangible. “Before the project, the entire village was a problem area,” says Myriam, but now that has been brought down to only four areas. When I say the village is quite spotless, the waste warriors disagree. I nod, but differ silently.

When it started out, the project aimed to tackle waste management, soil and water pollution depletion in tandem, but over the past year, Myriam and Arushi realised it would work better if executed in steps.

They are currently working on a natural farming project that should encourage villagers to grow crops other than eucalyptus, notorious for depleting the nutrients in the soil. They want farmers to grow indigenous plants that do not require intensive labour, but grow on their own, a technique inspired by Japanese farming legend Masanobu Fukuoka. The patch of land they are experimenting on has no Malabar Neem trees.

After the success of the Ecogram project in Tharahunise, their next step is to implement the same methods of waste segregation around the entire gram panchayat of Bettahalasoor, which has 10 villages, or 20,000 people in total.

You will also like: Watch Out: Bengaluru’s Waste Collectors May Soon Click Pictures of Your Trash and Rate It!

Getting your hands dirty in a village must have come with some objection, right? Not from the local people, who were curious, interested, and very cooperative. What does not come as much of a surprise to me is the difficulty they face from elected authorities.

Myriam concludes, “We are just doing what is enshrined in the constitution. We want to implement a decentralized waste management system and empower waste pickers.”

On our way back, I hear Arushi remind herself about the recyclable toothbrush she needs to collect. “And what is a recyclable toothbrush made of?” I ask, flag-bearer of mindless plastic consumption. “From wood – the OG (original) building material – and natural fibers.” Arushi says, disapprovingly.

Ms Gupta, practicing what she preaches.

To know more about the organisation and the work they do, click here.