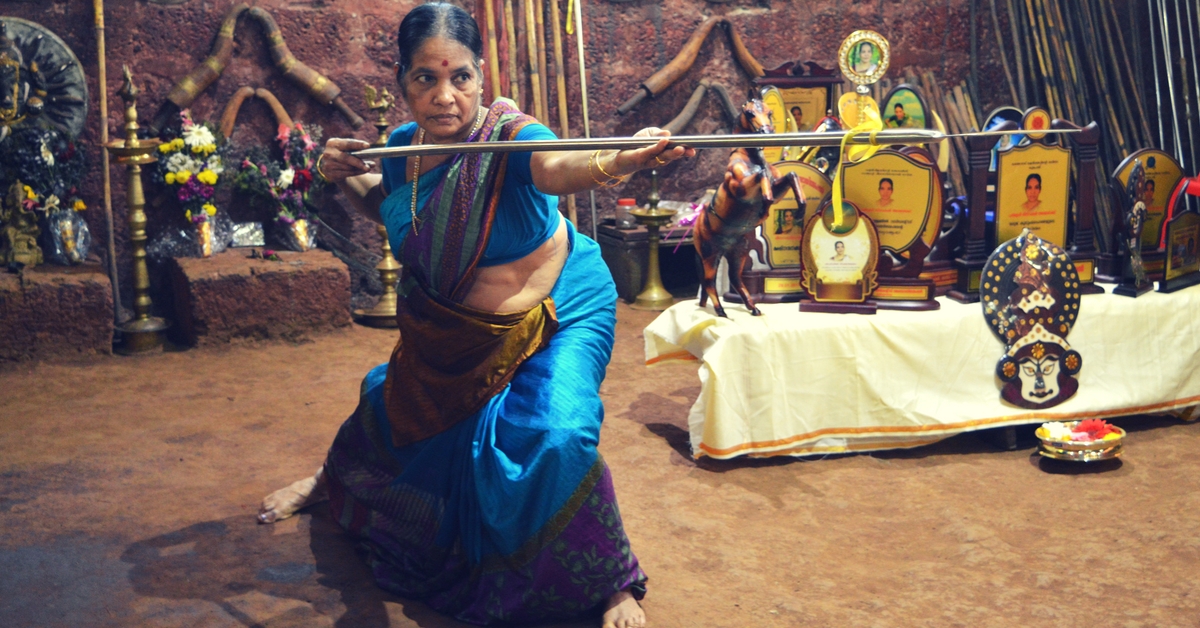 Meenakshi Gurukkal was first introduced to Kalaripayattu by her father at an exhibition performance when she was 7 years old.

The low crouching stance, unwavering stare, forbidding expression and of course, the shining long, sharp steel sword in the right hand, and a brass shield in the other, would scare the daylights out of any opponent or attacker. A thought that comes to mind is, “an angry tiger ready to pounce!”

But this tiger comes clad in a sari, is in her mid-70s and has the most beautiful, warm and affectionate smile when she is off the fighting ring. “I wasn’t expecting that. When I got a call, I first thought it was a crank call. The award really took us all by surprise,” explains Meenakshi amma, who defies age as she crouches in the typical Kalaripayattu (an ancient martial art originated in Kerala) stance, talking about receiving the Padma Shri Award this year.

Meenakshi amma or Meenakshi Gurukkal, which is what a woman teacher is addressed as in Malayalam, is one of the oldest woman Kalaripayattu gurus.

Hailing from a picturesque small town of Vadakara, about 45 km away from Kannur in Kerala, she perfectly fits ‘the unsung hero’ category that has been introduced in the Padma Awards from this year.

Seated in her mud floor and tiled-roof training center, which resembles a set from Chinese films showing Samurai training, Meenakshi amma is absolutely unassuming, humbly greeting everyone with a very polite ‘Namaste’. Reminiscing her early days, she explains that Kalaripayattu has been her life since the age of 7 when her father first introduced her to it by taking her to watch an exhibition performance by a Kalari group. “That was long before Independence and my father was determined that both my sister and I learn this art,” she recalls.

Observing her avid interest, she was enrolled to learn and train under Raghavan Master. “She ended up marrying him,” her 27-years-old grandson, Jittin Jayan, says cheekily, who quit his job in Chennai and has come to help his Ammamma (grandmother) handle interviews with the media and the growing number of visitors coming to wish her following the announcement of the Padma Award. Happily ignoring her not-so-stern censuring, he continues, “It was her tears when Appaapan (grandfather) was slightly injured and started bleeding at one of the exhibition events that prompted him to propose and marry her.”

This resulted in her getting closely associated with the Kerala martial art at the age of 17, when she got married and took on the responsibility of helping her husband-guru run the training center – Kadathanadan Kalari Sangam. The center is surrounded by tall trees and greenery, which of course is quite prevalent in Kerala. At any given time in the season of Kalari training (June to September or monsoon), she has around 150 students, aged between six and mid-twenties, learning the north-Kerala style of Kalari skill of jumping, twirling in the air, crouching, wielding Otta (sword), sharira vadi (long wooden pole), Urmi (long strips of steel ribbons) etc. There is no gender or caste bias here at all. The number of girl students usually equals that of boys. And there is no fee! At the end of the training session, the student pays a gurudakshina as per their ability.

Kalari, which is mentioned in Tamil Sangam literature (300 BCE to 300 CE), was taught to warriors as a combat form to fight battles. Then it was practiced only by men in the north and central part of Kerala, and the southern part of Tamil Nadu. According to legends, sage Agastya is regarded as the originator of southern Kalaripayattu, along with Lord Parasurama. After reigning supreme for many centuries, this martial art form witnessed a decline but was revived later.

Each movement in Kalari leaps and jumps is so graceful and fluid that they remind one of the traditional Kerala dance forms. Many practitioners of the traditional dance forms of Kerala include a couple of items of this martial art too. In fact, many feature films too have incorporated Kalaripayattu to take their story ahead. Way back in 1978, Kannada film Ondanondu Kaladalli, directed by Girish Karnad and the winner of the National Film Award, was entirely based on this form. In the present millennium, we have Kalari in films like Asoka, The Myth, The Last Legion, Manasara, Commando, Baaghi etc.

When young Meenakshi amma had started training, the number of girl learners could be counted on the finger tips. Thanks to the support extended by her father, she continued training even past her puberty. In the 1940s and ‘50s in India, girls were rarely allowed to participate in any such activities on attaining puberty. In fact, after her marriage, even Meenakshi amma practiced behind closed doors. She took care of the massaging of students, caring after the girl disciples and correcting their movements in the absence of the Master. It was only after the death of her husband about 8 years ago that she took charge of the institute and started publicly teaching and performing.

Nearly five decades of behind-the-curtain practice came to her aid when she started training others as vigorously as her husband did.

“My husband’s wish was to make this art accessible to everyone, irrespective of their caste and gender. He, as a young man, had faced bias and so had vowed to learn Kalari and spread the art to anyone who was willing to learn it,” recalls Meenakshi amma, speaking in Malayalam while Jittin translated it in English.
According to the Padma Shri Award winner, learning Kalari not only arms a person against adversaries but also boosts the confidence of the learner. “There is no need to carry arms. We teach many hand and leg combat forms also. In fact, this is the main and initial training in Kalari,’’ she elaborates while demonstrating on the mud floor of the center.

On the walls of the center hang the different arms commonly used for the training. “We have to take special police permission to store them,’’ explains Jittin. Many times while practicing, a performer gets injured. Even Meenakshi amma too has a deep scar below her eye. Hands and legs get injured quite often. “But that is part of any contact defence form. Every Kalari uses typical healing methods of full body medicinal oil massage. This not only helps in increasing the practitioner’s flexibility, but also treats muscle injuries that commonly occur during practice. In fact, because of the necessity of abundant oil massages, the training is conducted during monsoon when the weather in Kerala is cool,’’ informs the Guru.

When she isn’t training her students, she performs at exhibitions. Even at this age, she does over 60 performances with one of her oldest disciples, Sajil, who was trained under the Master. Many former students have now started their own training center. Meenakshi amma’s entire family including her sons, daughters and even grandson are practitioners of this art and are confident that Kalaripayattu is here to stay and has received its due.