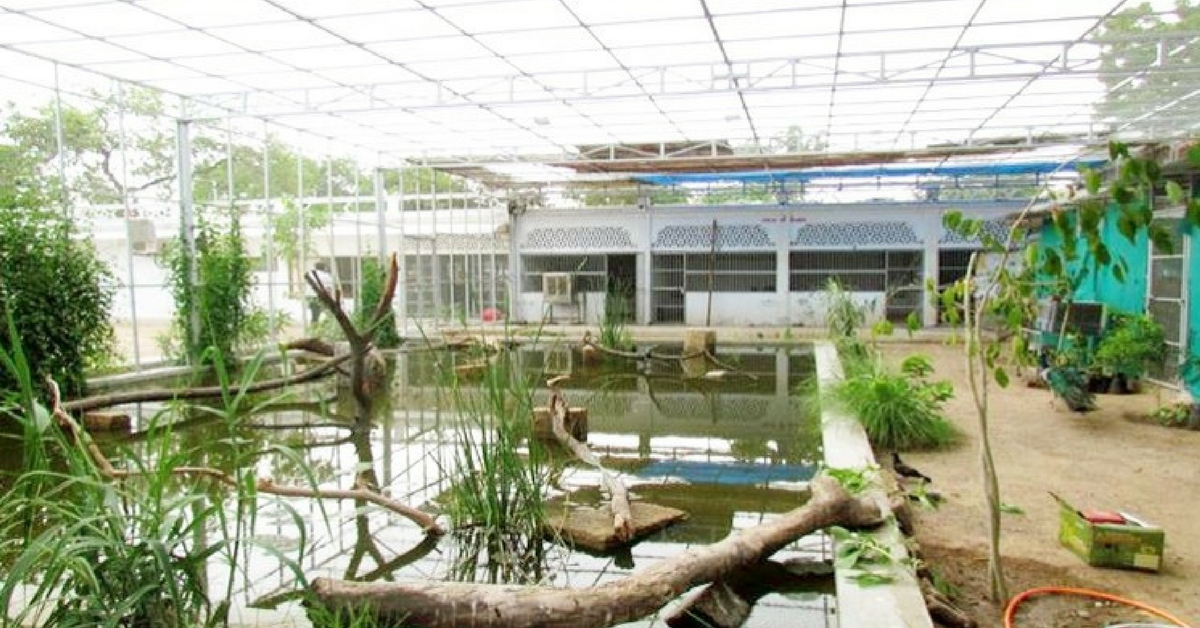 In a city with hundreds of suffering and homeless birds and animals, Jivdaya, an animal welfare trust is bringing hope and love to Ahmedabad’s furry and feathered residents.

“It all started when one of my many dogs suffered a canine dysfunction,” says Roma Rajan, an enthusiastic volunteer at Jivdaya. An animal lover and a faculty at the aviation college in Ahmedabad, she spends as much time as possible at the animal welfare centre.

As she rides through the Panjrapol entrance on her two-wheeler, her face glows with an unseen smile. She feels at home, and as she drives in, a stream of dogs circle her to say hello. Back in 2009, when she admitted her dog to the hospital for surgery, she came across a centre that offered an unexpected taste of humanity – Jivdaya. Other private doctors hesitated to touch the dog as it was the Indian Pariah breed, which is commonly known as the Indian ‘stray’ dog. “The centre closes at 6 PM,” she says.

However, back then, the doctors carried on till 8 PM so that the operation was successful.

Post-surgical procedures took another hour, and she was touched by the dedication of the employees to an animal. She asked a doctor if he lived nearby. “My home is almost a two-hour journey from here,” he replied. Later, when her pet was under observation, for the next few days, Roma drove around many people who work here, thus understanding their lifestyles and their deep involvement with the centre. “I made up my mind to devote my time at Jivdaya then. Whenever there is an emergency, they call me. We treat animals free of cost,” she says.

“The greatness of a nation and its moral progress can be judged by the way its animals are treated.” – Mahatma Gandhi

Jivdaya, the organisation dedicated to animal welfare, was started by Giraben Shah with her father Hasmukh Patel, two trustees, and four employees. It provides medical care to stray domestic animals, and also runs a rehabilitation centre for wild birds and small mammals. It helps suffering animals, and tries to nurture them back to a healthy and happy life.

When it began in 2007, Jivdaya was nothing but a field full of grass, snakes, and one big room, sans a van, driver, or animal catchers. Then a ‘Save the Birds’ campaign was launched, and an avian operation theatre was built. Injured birds flocked in – doves that bled, crows and sparrows with cut wings. With them came volunteers and help.

An X-ray machine, air purifier, and autoclave were the first bought for the centre, followed by three kennels and three cages. Jivdaya was considered successful!

“As soon as I enter, I feel that I experience heaven on earth. I have nothing on my mind. I get and give selfless love,” says Roma. “We admit every animal as a patient, just as any human would be taken care of.” There is a van that brings in animals and birds after verification of a mishap. A case paper is filed and then the right doctors are informed. The animal is taken into the operation theatre, ICU, or ICCU, as required.

“Dogs are much more than faithful servants,” Roma says. A dog donated blood to another once, and the team of doctors and Roma sat beside it over the weekend to make sure that the healing process was complete.

As she proudly showed us the centre, every dog – the injured, the healed, the operated-on – rubbed its empathic face on her, showing love and respect, and most importantly, a sense of gratitude. She walked past a black dog, completely blind. Growling at first, he sensed a familiar smell and calmed down. As she caressed his face, he snuggled against her, and a tear trickled down from his eye.

The over-sized net boundary managed by Shrikant hosts and cures royal birds, like the peacock with a broken foot, flamingos, and more. A flutter of over 250 pigeons was divided and tagged. Some awaited release after recovery, others were more long-term residents. Some had a cut wing or leg and could never fly again, while a few had terminal illnesses.

They all had one thing in common—they were well-fed and content.

Uttarayan is the busiest period for bird care, the staff says. “We are as strict with hygiene as we can be with existing resources. Everything is sterilised, biomedical waste is taken care of, masks are provided, and instruments are maintained and cleaned regularly. With the 30-40 birds that undergo simultaneous surgery during Uttarayan, there is not even a single set of equipment which hasn’t been sterilised. Three or four autoclaves are constantly in function. So as soon as one set is used, the volunteers replace it with a clean and sterile set immediately.” Giraben Shah is proud of the work being done.

Ushaben cooks 100 rotis every day. She feeds pure milk to every animal, and paneer to the weaker dogs. She knows how and what to give each one. It is almost as if she is one of them. “We believe in love at first lick,” exclaims Roma. “Society is changing. It is getting tolerant.”

The Amdavadis now know that there is someone to share the responsibility of curing stray dogs and hurt birds. Unlike the noisy neighbours who would abuse an annoying puppy, citizens adopt, nurture, and train them. Unlike the youth that would spend their evenings cutting manjha during Uttarayan, a group now acts as volunteers. “Something is changing,” Roma knows. As she zooms past the cow shed, she is saddened by the plight of the cattle that crowds at the Jivdaya gates for water and food.

Help Jivdaya Charitable Trust save animal lives by donating online. Do you know stories of people that will help map your city better? Find out how you can contribute to The People Place Project here.