An HIV Positive Boy was told not to come to School. Watch how a Video got him Re-admitted.

The video is about inclusion of HIV AIDS patients through Keshav a small boy who was denied education by a teacher but was readmitted to his school through the efforts of a community correspondent.

After being asked to not come to school, Keshav was distressed. He does not know that he is HIV positive. Watch how one woman got him re-admitted to school with the power of a video.

It is a sad reality that people still do not understand the exact nature of HIV/AIDS and think of it as a contagious disease. Government campaigns and other awareness programmes have tried to educate citizens about it but the stigma related to AIDS still lingers. People inadvertently, or directly, end up discriminating against HIV positive patients.

This inspiring video talks about Keshav, who was abruptly asked to leave school because he is HIV positive, and of a successful attempt by Rohini Pawar, who was determined not to give up. A community correspondent with Video Volunteers, Rohini decided to help him get readmitted to the school. Keshav does not understand that he had AIDS, neither is he aware of the implications behind it. He is an orphan and is taken care of by his grandmother and an elder sibling. A school teacher who came to know about his condition, suddenly asked him to study at home and not to come to school again.

The Principal, who knew nothing about this case, realised only after Rohini showed him a video she had made on Keshav, earlier. Fortunately, he willingly decided to re-admit Keshav without any discrimination, and pledged his full support. 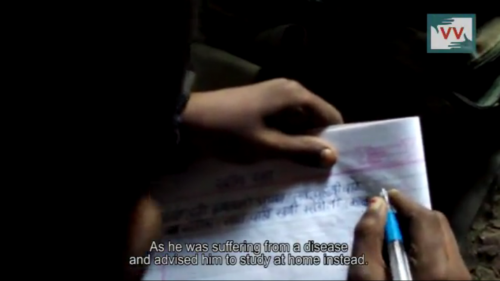 Keshav is regularly going to the school now. His grandmother is happy and grateful for the intervention. Watch Rohini Pawar talk about her attempt and what she did to get Keshav back to school.