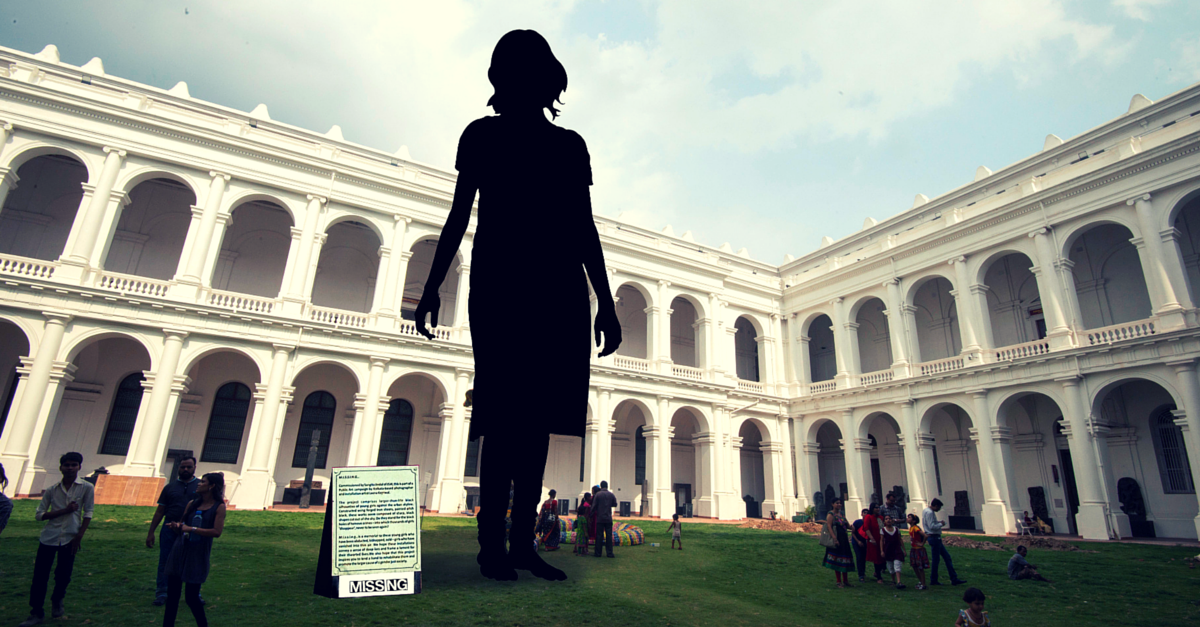 Project “Missing” is the creation of a Kolkata-based artist, Leena Kejriwal, whose faceless and larger-than-life silhouettes of girls are a reminder of how so many vulnerable girls go missing and become part of the prostitution racket in the country.

She is anonymous, faceless, lifeless, dark and voiceless. But she shouts out loud for the millions of young girls who are trafficked every year in the country.

Creation of a Kolkata-based artist, Leena Kejriwal, these faceless larger-than-life silhouettes of girls are a reminder of how so many vulnerable girls go missing and become part of prostitution in the country.

Leena’s art work has been exhibited globally, including in Kolkata, Delhi, Tehran, Berlin, and Weimer. After travelling across the world, Leena came back home to India for a cause — a cause that had been close to her heart ever since she got involved with an NGO working in the field of human trafficking.

As per a report by the Ministry of Women and Child Development in 2007, there are approximately 3 million women into prostitution, of which 35.47 percent are girls below 18.

“I thought, why not use art as a medium to spread awareness about the issue? So many girls go missing just like that. Young girls are an easy target for traffickers and I thought it is time that the issue be communicated to the public in a way that is not preachy,” she says.

After a lot of brainstorming, Leena decided to go ahead with project “Missing.” The idea was to set up huge iron-and-fibreglass sculptures of girls, rising 12 ft to 15 ft above the ground, and install them in at least 10 cities across India.

The sculptures, which take up very little ground space, are water and wind proof so they can usually survive any kind of weather.

“They are silhouettes of young girls which, once they are set against the sky, seem like sharp cut-outs in the sky; cut-outs which are doorways to black holes into which millions of girls disappear from the face of the earth,” Leena explains.

To make the project more interactive, Leena is also working on an augmented reality mobile app that will allow anyone with a smartphone to engage with the installations, uncover hidden stories, and connect with NGOs and campaigns working on the issue.

Launched in Delhi’s India Art Fair in 2014, Missing received a huge positive response, which gave Leena the confidence to take the project to other cities as well.

“The problem is there is no public funding by the Government for artists. This is such a huge project and we have been struggling with insufficient funds to make and install these sculptures.”

She has started a crowdfunding campaign to support her cause, where she aims to raise Rs. 16 lakhs for installing the sculptures in 10 other cities and supporting the augmented reality animation, a technology that superimposes a computer-generated image on a user’s view of the real world, thus providing a composite view.