No Foreign Leader at Republic Day This Year? Here’s Why India’s First R-Day Guest Was Special 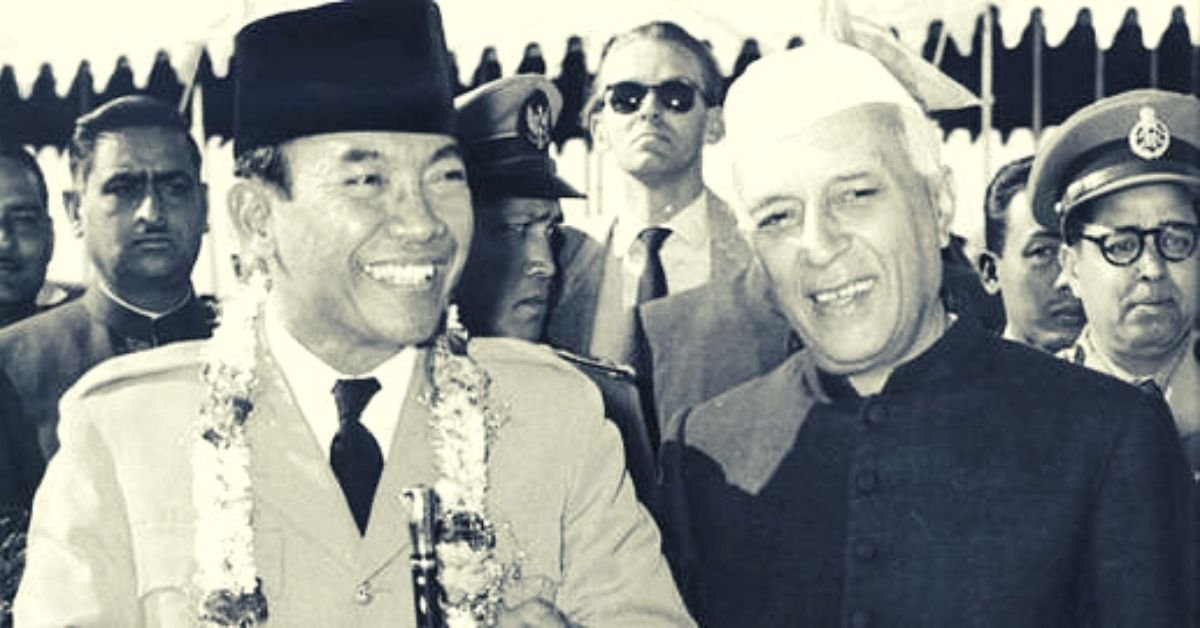 Thanks to the coronavirus, India will not host a Head of Government or Head of State during the Republic Day parade in New Delhi for the first time in decades. British Prime Minister Boris Johnson canceled his plans, owing to the emergence of a new strain of the virus.

With conversations surrounding the lack of a foreign leader attending India’s Republic Day celebrations gaining traction on social media, it became imperative for history buffs like us to look back at the leaders we invited in the past. While India has invited many foreign leaders for its Republic Day celebrations, there is one who stands very tall.

When India celebrated its first Republic Day on 26 January 1950, the newly sworn-in Government of India, led by Prime Minister Jawaharlal Nehru, invited President Sukarno of Indonesia. There was a reason why India invited this anti-colonial giant from South East Asia on the appointed day when it cut the last of its ties to the British Empire.

On 25 January 1950, Sukarno, the first President of Indonesia, landed in Delhi. At the airport, he was warmly received by his friend and close ally, Nehru, and C Rajagopalachari. It was only a month prior, in December 1949, when Sukarno finally persuaded the Dutch colonists to transfer complete sovereignty to the new south-east Asian nation.

India and Indonesia had cultural relations dating back centuries, but Sukarno and Nehru shared similar ideals of anti-imperialism and secularism. After all, both were proven freedom fighters. Moreover, even before India had attained Independence in 1947, Nehru played a pivotal role in bringing global attention to Indonesia’s struggles against the Dutch.

Before World War II, Indonesia was a Dutch colony. The Dutch imperialists owned large tracts of rubber, tobacco and sugar plantations in this resource-rich colony. During the war, however, the Japanese occupied Indonesia with ease. The Dutch didn’t have the ability to defend its economic interests there.

Under Japanese occupation, much of the Dutch-established political, economic and administrative infrastructure was destroyed and replaced. The Japanese interestingly also encouraged the spread of Indonesian nationalist sentiment, although it was more for Japanese political advantage than any altruistic desire to support Independence.

But when Japan’s fortunes in the war began to turn for the worse, then Prime Minister, Kuniaki Koiso, promised Independence for Indonesia. Two days after the Japanese surrendered, Sukarno and his fellow freedom fighter Mohammad Hatta, the country’s first vice-president, proclaimed Indonesian independence on 17 August 1945. The following day on 18 August, Sukarno was elected President, and Hatta as Vice-President.

With the Japanese out of the way, the Dutch wanted to reclaim their economic interests. Standing before them was a fledgling Republic. Despite talk of freedom and democracy in the West following World War II, Western public opinion continued to treat Indonesia as an “internal question” of the Dutch, even though the nascent Republic had undergone significant political maturation during the nearly four years of Japanese occupation.

With the fledgling Republic under Sukarno and Hatta unwilling to budge, the Dutch surreptitiously began sending their troops into Indonesia. Meanwhile, to assist the incoming Dutch forces in suppressing the new Republic, British-Indian troops were sent to Indonesia. What ensued was the Indonesian National Revolution, which witnessed a bloody armed conflict and diplomatic tussle between the new Republic and the Dutch Empire.

“Nehru’s tireless calls to withdraw them from Indonesia rattled the British, who supported Dutch ambitions but could not afford to…oppose important Indian leaders with whom Britain herself was engaged in delicate negotiations over the future of her ‘Jewel in the Crown.’ Immediately after the War, the world was still Eurocentric and Britain’s advice guided U.S. decisions on colonial matters, especially ‘East of Suez.’ This was Nehru’s advantage, which he pressed fully, with one eye to Asia’s ‘collective destiny’,” writes Navrekha Sharma, a retired diplomat and former Ambassador to Indonesia, for The Hindu.

What Nehru did was congratulate the fledgling Republic on its first anniversary on 17 August 1946, and announced the holding of an Asian Relations Conference in Delhi. In response, Sukarno ordered that India’s tricolour be flown with the merah putih (the Red and White of the Indonesian flag) at their anniversary celebrations in Jakarta.

Sukarno even wrote to Nehru on 19 August 1946, saying, “Your country and your people are linked to us by ties of blood and culture, which date back to the very beginning of history. The word ‘India’ must necessarily be a part of our life, for it forms the first two syllables of the name we have chosen for our land and race — it is the ‘Indo’ in Indonesia.”

He goes on to express his gratitude at the end of the letter.

“But Indonesians can never forget what you yourself or what India has done for us. Ingratitude is not one of our sins. Therefore, we shall always cherish the help and goodwill we have received from you and, when all the present difficulties have passed, we look forward to friendship and fruitful cooperation with you…We hope it will not be long before you can come here in person to see for yourself just how deep is the affection and respect we have for you and India,” he writes.

Subsequently, in March-April 1947, Nehru hosted the first Asian Relations Conference in New Delhi. The key topic of discussion was the conflict in Indonesia. The conference brought leaders from different independence movements across the continent, and was an attempt to establish a unity of Asian nations coming out of colonial rule.

“Biju Patnaik, later to become the chief minister of Orissa, responded to Nehru’s call to pilot his aircraft to Indonesia to rescue vice president Mohammad Hatta, and PM Sutan Sjahrir from the Dutch to fly them to New Delhi to attend the conference. Years later, Sukarno made Patnaik an honorary Bumiputra,” writes Archis Mohan for StratPost.

However, about three months later, when the Dutch launched a massive military offensive against the nascent Republic, Nehru took Indonesia’s case to the United Nations. Even after India attained Independence, Nehru continued to intervene on behalf of Indonesia.

“Another Nehruvian initiative was to convene the ‘New Delhi Conference’ on [the subject of] Indonesia on January 20, 1949, after a second Dutch attack. The Cold War had, by now, settled in, the U.S. was in total strategic command, and the Republic’s importance to the West (after it had suppressed a Communist revolt) had increased manifold. Independence appeared closer, but the Dutch were incredibly stubborn and the US slow to act. At this tense juncture, the Delhi Conference greatly boosted the Republic’s morale,” writes Sharma.

Backed by the resistance of the nascent Republic and international pressure, the Dutch finally recognised Indonesian independence and sovereignty was formally transferred on 27 December 1949.

India played a massive role in drumming up international pressure.

‘The spirit of Asia’

A day after India’s first Republic Day celebrations, Delhi University organised a special event, where they conferred an honorary PhD on President Sukarno.

A moment that remains etched in the memory of those who attended the ceremony was when Sukarno ended his speech by proclaiming ‘Jai Hind’ while Nehru reciprocated by shouting ‘Merdeka’, which means freedom in Indonesia.

Years later, the two would come together again at the Bandung Conference of 1955, hosted by Indonesia, where they would invoke the “spirit of Asia” and lay the foundation of the Non-Aligned Movement in the Cold War era.

While relations between the two nations have endured its ups and downs ever since the Bandung Conference of 1955, no one can take away the spirit of freedom that first brought together the two Asian giants in the post-colonial era.