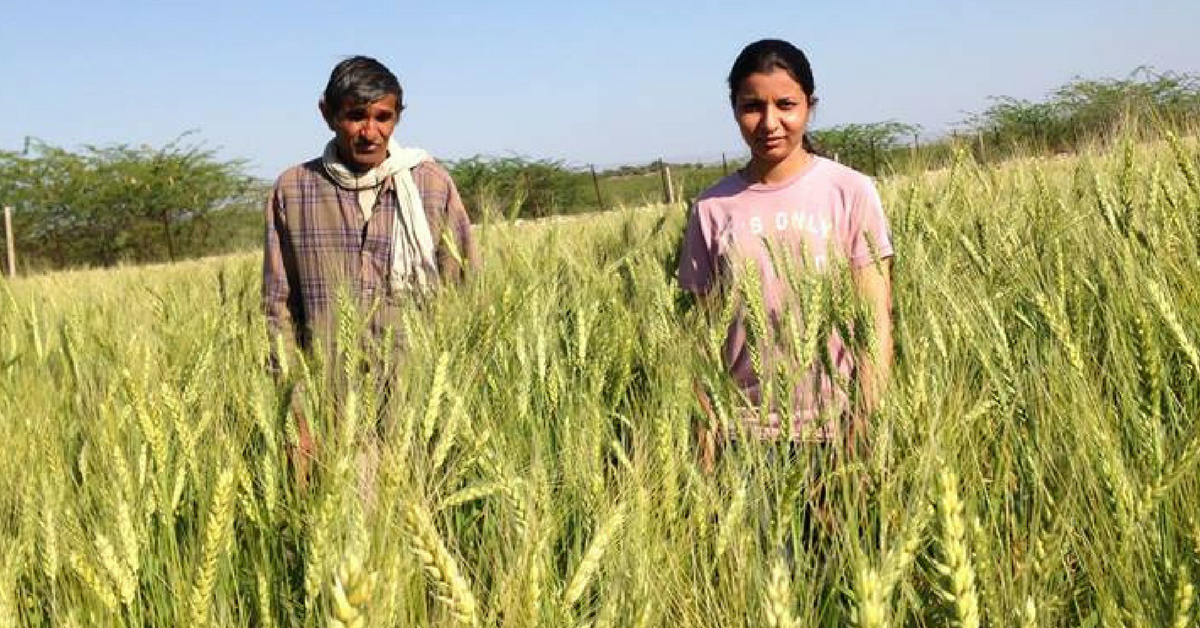 After Ankita joined her father, she has introduced many modern techniques in the farm as well as in the dairy.

This father-daughter duo left their well-paying jobs and became farmers. Today, they earn as much as they did in their corporate jobs.

“Health is like money, we never have a true idea of its value until we lose it.”  – Josh Billings

Phoolchand Kumawat also understood the true value of health only when his daughter, Ankita, fell severely ill. Ankita suffered from an extreme case of jaundice when she was just three years old. The only way to cure her was to feed her unadulterated food and pure milk as advised by the doctor.

Phoolchand tried to get pure milk from every possible place in Ajmer. However, none satisfied the health requirements of Ankita. Meanwhile, he also got some ghee from the market to make sweets at home on the occasion of Rakshabandhan. Though the sweets were made at home, the adulterated ghee made every family member sick. This is when Phoolchand decided to buy an indigenous cow.

Phoolchand belonged to a farmer’s family and was quite passionate towards farming and dairy farming. However, just like other young boys in his village, he too left farming to have a good future.

He ended up doing engineering and was soon placed into government service in the PWD department. Though this was a life every farmer dreamt of due to the hardships in farming, Phoolchand realized that the mechanical life might be giving him material happiness but he was missing out on the most important thing — health.

“I bought a cow almost 25 years ago for Rs. 3,500. The only intention was to feed my family, especially my ailing daughter, unadulterated milk and milk products,” said Phoolchand.

Once Ankita felt better by having the milk from their own cow, her father realized that not only milk but every food item that they get from the market was adulterated. The vegetables, lentils and grains were grown by using harmful pesticides and chemicals, which were doing more harm than good to their health. He wanted to grow his own food now. However,his job did not allow him to do so, but job security was also important to take care of his family.

Meanwhile, that one cow had a family and the family kept growing with each passing year. The Kumawats now started selling milk to their neighbours. At one point, there were so many animals, that it became difficult for Phoolchand to take care of them along with his job. Meanwhile, both his daughters also finished their education.

Ankita was an MBA now from IIM Kolkata and was going to join a multinational company soon. Hence Phoolchand took voluntary retirement in 2009, once Ankita joined her company.

Ankita was growing fast in her career. She had been to the USA and Germany for a few projects too and was looking forward to a bright future.Phoolchand, on the other hand, bought some land in Ajmer with the money he got after taking VRS and started growing grains and vegetables.

In 2014, following the footsteps of her father, Ankita too left her lucrative job as an assistant manager in a reputed company and joined her father in his dairy and farming business.

“We have been brought up in a middle-class family and like every other middle-class kid, even we were always job-oriented and never thought of farming or any other business. But I sensed how passionate my father was about this. He was keeping unwell and as the eldest child, I decided to stand by him,” says Ankita.

Today, Ankita is the co-owner of Maatratav Dairy and Organic Farm, which has 100 cattle and grows wheat and all seasonal vegetables and fruits.

Ankita also did a course in mushroom farming from Solan, Himachal Pradesh. She has grown some mushrooms on an experimental basis, which came out really well and is planning to grow on a large scale soon. She is also planning to establish a vermi compost plant to supply organic compost to the farmers.

After Ankita joined her father, she has introduced many modern techniques in the farm as well as in the dairy. The entire farm is drip-irrigated and works on solar energy. Rain water harvesting is also done in the farm.

Ankita calls her farming a mixture of traditional and modern farming. She believes that her management skills, decision-making ability and willingness to adapting to a new environment that she has learnt from IIM and her corporate life helps her in farming too.

“In a corporate job you have a fixed salary, you have fixed working time. Here you don’t have both these benefits but the biggest benefit in farming over a white collar job is that you are living a healthy life and leaving a sustainable world for your coming generations,” Ankita says while speaking to TBI from Ajmer.