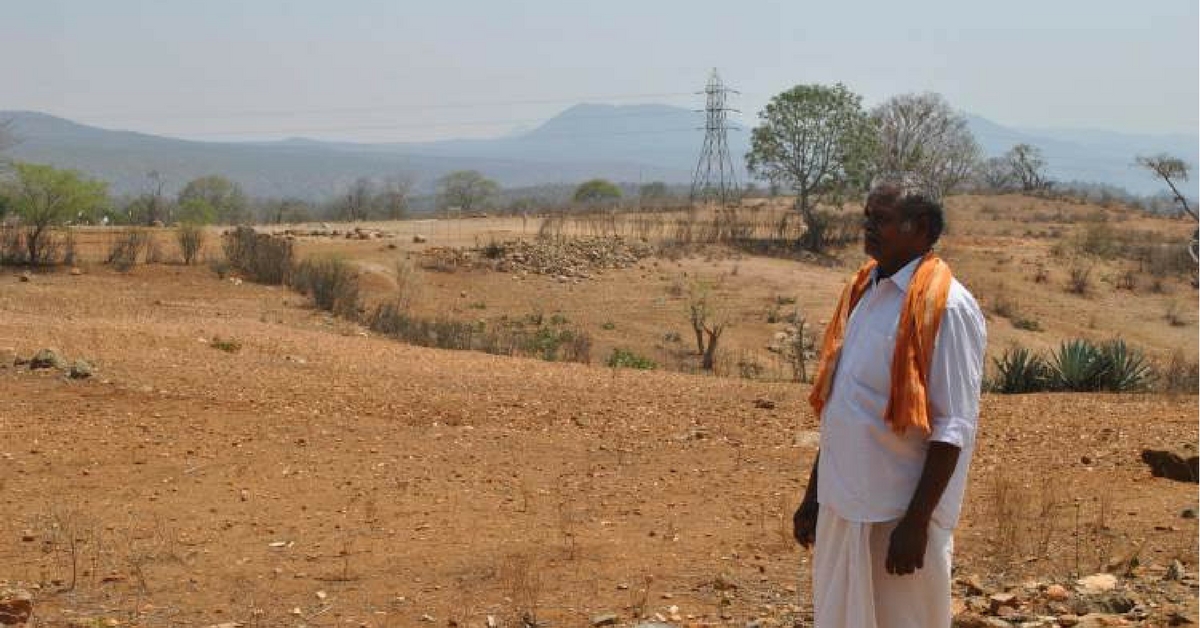 Travelling to spot wildlife in the forests of Masinagudi turned into a unique experience for a writer when he stumbled upon a settlement of the Irula tribe.

Serendipity is one word to describe my experience. I stumbled upon the Irula tribe when I was on the lookout for something completely different.This event gave me a completely new perspective of life, and an excellent story to write about the power of positive living.

“It isn’t your lucky day, sir,” said my driver. I was desperately peeping from my jeep window, looking for wildlife. I had just learned that being on a holiday in a ‘forest’ and not spotting a single animal can be quite upsetting. Fanning my upset mood was the hot breeze in the Masinagudi forests, which, ironically, are touted as a place of refuge from the heat.

Right in the middle of the reserve forest, I found some animals at last. A lad taking his herd out for grazing. Surprised to find a human out of nowhere inside the forest, I looked outside and a sign board that said ‘Mayanur-Irula Tribe Settlement’. I asked my driver to take me inside, and agreed to pay him extra for the ride back. He kept assuring me that we would definitely find an elephant herd if we headed back, but I had decided to call it a day. I insisted on visiting the tribal settlement.

Mayanur was not a typical Tamil Nadu hamlet. It could be a village in Rajasthan, totally parched. We saw an old man gazing out into the open lands once we entered the tribe’s lands. I got down from the jeep and began walking towards him. The boy who was with the goats looked at me and said the old man’s name was Shivayya, and that he was the Irula head priest. He was the one who told me more about the Irula tribes and their origin.

The Irulas, Shivayya said, are the first native tribes of Tamil Nadu. “The name ‘Irulas’ originates from the word ‘Irul’, meaning ‘night’ in Tamil. The Irula men were originally part of the Kings’ Guard. They were the ones who kept watch at night,” he told me. Cue to the catchy Game of Thrones theme music playing in my head. What followed justified this jump my mind made to GoT.

Shivayya pointed to a pillar and said, “This was the first pillar our ancestors erected here, 2,000 years ago, and every time an Irula was ready to be sworn into the Kings’ Army as a night guard, it was here he took the oath. For thousands of years, Irulas served the Chola dynasty as night guards.”

“Since we were always the men of the Kings’ Guard, we are built to withstand hard times, and have been taught not to complain about hardships,” Shivayya said as he began taking me around the Irula settlement. This was the point where I realized that what had started out as a holiday had brought me to a place with an amazing story about how the Irula tribe is a standing example of grit and positivity.

Historical significance of the Irulas

As we began walking, I asked Shivayya more about the history of the Irula settlement.The Irula settlement in Mayanur is about 2,000 years old. “The Irulas walked across the Bandipur Sanctuary and set up a camp at this place since there was a river running by it,” Shivayya told me. They found this place so secure that the camp became a permanent settlement.

They began by serving as Kings’ Guard and moved on to specializing in catching venomous snakes and rodents. “We specialize in cobra antivenin, where we milk a cobra to produce an antidote for snake bite. Irulas began moving to cities in Kerala, Tamil Nadu, and Karnataka once there was a requirement of snake bite cures,” Shivayya said.

To me, it was evident that these professions had built the positive attitude and grit to remain calm and stable even during times of crises.

Into the lives of the Irula

We walked around the Irula houses, and I observed that the Irulas spoke a language which was a mixture of Tamil and Kannada. When I asked Shivayya about this, he said, “Our language is a boon and a bane for us,” and broke off chuckling. He continued saying, “The Tamil Nadu government feels that we belong to Karnataka and the Karnataka government thinks the other way round. Hence, we often have to fight for the state government schemes for the tribes, but other times, we get lucky and get allowances from both the states.”

A typical Irula house looks like the kind of house I would make only if I absolutely had to. It is made entirely of stones and mud. Most houses don’t have doors, so the homes look welcoming to guests. The households have hunting dogs as pets, and a separate house for their goat and sheep.

“The Irula tribes trust the hunting dogs to protect them and their cattle. There have been instances where the dogs have scared even elephants away!” Shivayya said when we were inside one of the cattle houses.

There are about 50 families in this settlement, and I was surprised to find that almost every household had a DTH connection and a television, despite being devoid of basic facilities like proper sanitation. When I asked Shivayya about this, he chuckled and said, “Yes, the government constructed toilets for a few houses here,” and pointed to one of them.

The toilet was very small, and just had an asbestos sheet to function as a door. Shivayya asked me, “Do think it is possible for anyone to use this?” I was silent.

He continued saying, “We relieve ourselves in the open, and refuse when officials come and ask if more toilets need to be constructed. It is our culture, and we don’t complain, because complaining is against our culture.”

“Irulas shifted to agriculture as times went by, and were allocated land by kings. For many years, we remained farmers. The land around us is all Irula land, and we cultivated millets here. This was the only place in Tamil Nadu which had millet cultivation for many years. Now, since we have so less water, without complaining, we have shifted to animal husbandry,” Shivayya said. He then smiled and took me around to one of the Irula households.

Here, I met Irula children. 12-year-old Tipu and 8-year-old Megha told me about school and their aspirations of becoming an engine driver and an actress respectively. Their parents pointed to another child and told me he couldn’t speak but was excellent in mathematics. An engineer from the electricity board drives the children to a local school at Masinagudi, and brings them back home every day.

Their parents appeared to be tea-estate workers, and they invited me home for lunch. The kids pulled me inside, and all of us sat down for lunch. A huge ragi ball with pickle is their lunch every day. I amused the kids with my attempts to swallow the ragi. The drinking water was too salty, but the people here neither complained nor cautioned me from drinking it.

Our lunch conversation in the house was about the Irula culture. Irulas refrain from eating rice and consume millets, unlike the common habit in South India. This is because the millet-based food was ideal for the climate, and the best fit for their rigorous lifestyle. Irulas, I was told, celebrate Shivaratri, with great gusto.

“On Shivaratri, we make it a point that Irulas from all over the world gather here. We chant bhajans and prayers of Lord Shiva, our chief deity, throughout the night,” Shivayya said, and invited me to come over on Shivaratri to click pictures. “It will be amazing!” he said.

The oldest Irula lady, a woman of wisdom

Shivayya then asked me, “You want to meet someone interesting?” We went to another thatched-roof home and saw an old woman chatting with her friends. When she saw me trying to take photos of her, she said, “I hate reporters and tourists. They all are temporary people, and just leave after hearing us out.”

She gave me a stern look and asked, “What are you going to ask me? How old I am? What sufferings I and my tribe face? Write a sympathetic sad story about us? We all are very happy people.The forest gives us resources, and strangers take the resources away from us. Yet, we all are happy. We are all happy,” she said again, and paused to take a sip of water.

“If you take a picture of us, don’t post it in gray-scale and write a story that we lead sad lives. Write a colourful story with bright pictures of us,” she said. She kept her face stern the whole time I was taking the photos. Finally, she turned to Shivayya and ordered him to make sure I sent them a copy of what I wrote.

Shivayya laughed at this. The old lady looked at me again and said, “No sad stories about us, OK?” Dare I disobey?

Mixed feelings and a positive send-off

Bringing me to the old lady seemed like Shivayya’s way of saying goodbye to me. I had taken enough of his time and deluged him with my torrent of questions. Thanking him, I waved bye to the children as they chased my jeep once we started moving away. I was heading back home, and felt a bit numbed.

Instead of seeing wildlife in the forests of Masinagudi, I found generosity instead. I had met people who made a virtue out of positivity and not protesting against injustices of life. It might have been an uneventful trip but for visiting this settlement. The Irulas gave me a story and insisted that they be portrayed as happy.

On the way back, the driver once again commiserated, “It isn’t your lucky day, sir.” I told him, “It is the luckiest day of my life.” At least for that one day, the positive attitude of the Irula tribes had rubbed off on me too.

About the author: Gautham Bharathi is a Fellow with Milaap.

Want to cover inspiring stories of change and make a substantial difference in the social sphere? Click here to join the Milaap Fellowship Program.