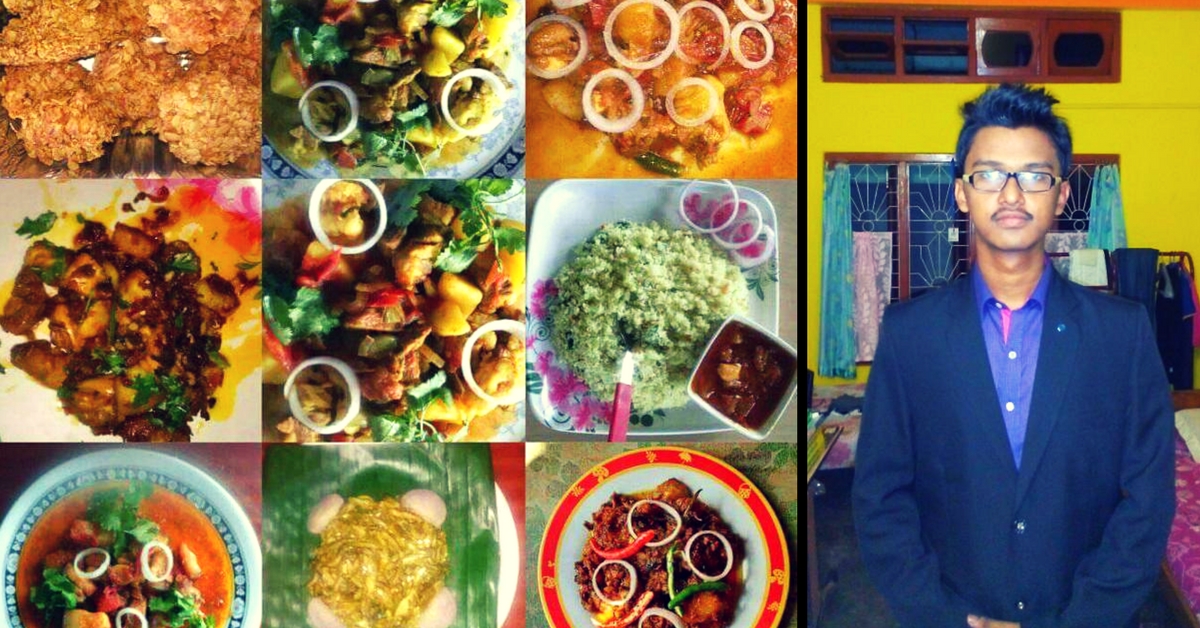 Meet the 22-year-old who is popularising traditional, ethnic Assamese food through his food startup, while also creating jobs for rural youth in Assam.

“My goal is to impact the lives of rural people; to improve their livelihoods and to uplift the rural economy,” says Hironmoy Gogoi, a 22-year-old resident of Sivasagar town in Assam.

With this mission and lots of ideas in mind, he founded Gaon Ka Khana (GKK) – a food startup that takes online orders from urban areas in the state and delivers ethnic food made by rural women.

The inspiration behind Gaon Ka Khana was born in the year 2012 after Hironmoy lost his mother at the age of 18. “For several months after that fateful day, I felt completely blind in life,” he says. He didn’t know what to do, what next steps to take, or where to go. This was the time when he was giving a lot of thought to the kind of bonding there is between mothers and sons. And from that grief was born the thought that he should treat other moms in his village as his own mother, and work for their welfare.

“I promised myself that all the women of Assam who are deprived of basic needs will be like my mother. I find my mom in them and I want to do something to empower them financially,” he says. That’s how the concept of GKK was born.

Hironmoy had three major ideas behind the startup – to sell authentic Assamese food, to popularise healthy food habits, and to help farmers by procuring raw materials from them.

After conceptualising the idea and completing market research, he started GKK with four of his friends in June 2016 from his own kitchen with a single stove.

Today, GKK is operating in four districts of Assam. It has an office with a kitchen in Sivasagar where 10 women work full time as cooks. When the team gets bulk orders from corporate clients, it outsources the orders to women living in rural areas. GKK has about 300 women working on an order-to-order basis. The women are provided with the raw materials and use their own kitchens to complete orders whenever they get one.

GKK gives 70% priority to ethnic food, but the remaining 30% is given to western cuisines to attract customers from the age group of 18-25. They get 100-150 home delivery orders in a day along with bulk orders. “The significant point is that the price of food is very less so everyone can afford it,” says Hironmoy who has had a long journey of struggles before he reached this point in life.

An undergraduate from Delhi Public School, Nazira, he wanted to join some reputed university for higher studies, but because of certain domestic issues in his family, his father could not afford to pay for his education.

“I started thinking out-of-the-box because I wanted to see places other than my small village. I did a lot of research online to find if there is any way to go to other countries,” he says. Based on that knowledge he joined the Merchant Navy and after completing his training in Mumbai, worked in Malaysia for two months. He then quit his job and went back to Assam to work on his dream startup.

Through GKK Naturals the team is supporting small-scale vegetable producers belonging to rural areas who “can’t even go to the commercial markets to sell their produce.” GKK is supporting them by purchasing their produce and selling it online. GKK never uses vegetables procured from the commercial market even in its day-to-day recipes so that the rural producers can earn a living. The team goes door to door to collect the produce and pays 30% higher prices than what is offered in the local market.

GKK Mondita Snack has been named after Hironmoy’s mother, and as a part of this wing he has initiated the formation of self-help groups in Sivasagar.

He encourages women to produce eatables that will be productive for their self-development and will also help them earn. For this, he organised many campaigns to help people understand the importance of starting SHGs and how they can be made productive. Today, those women are producing Assamese traditional food items.

GKK was completely bootstrapped by Hironmoy. He says, “I have often heard people in my village say that there are no employment opportunities here, or that we cannot start something new because we don’t have the funds or we don’t belong to an influential family. GKK conveys the message that money is not the only thing we need to start a business. It can also be about getting the right idea and addressing the right market at the right timing. Thanks to social media, we have many resources at hand.”

Before beginning to take online orders, Hironmoy launched a Facebook page and started a marketing campaign for GKK, which turned out to be very useful. Prior to that he also worked in the BPO sector in Kolkata for a year so he would be able to save funds and invest in the company.

Eventually, he started getting orders and reached a better financial situation to be able to hire people.

In the future, GKK plans to reach the international markets, which will in turn help them hire more people for production. Hironmoy wants to create at least 3,000 jobs for rural youth in the next five years.

“I am doing this to make mom proud. If I can do something for people who are deprived of basic needs in life – I think that is the biggest thing,” concludes Hironmoy, adding that he has noticed a change in mentality in his village with respect to entrepreneurship now that people know about his work being appreciated.