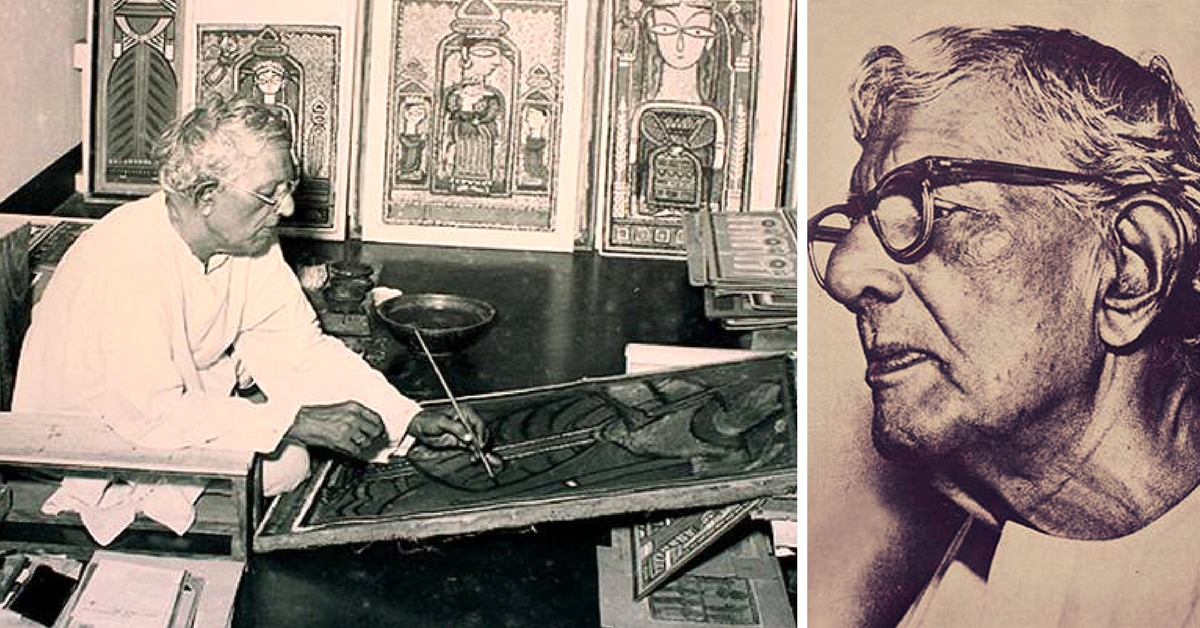 April 11, 2017, marks the 130th birth anniversary of Jamini Roy, and Google commemorated the occasion with a doodle that pays homage to the iconic Indian artist’s signature style.

One of the most significant modernists of the 20th century in the world of Indian fine arts, Jamini Roy is known for his dazzling portrayal of India’s folk culture and rural ethos. Such was the beauty of Roy’s work that it brought him both national and international recognition, with his paintings being compared with those of famed French artist, Henri Matisse.

What make Roy’s distinctive style all the more unique is that though he was trained in the western classical style of painting, he chose to develop his own voice as an artist by returning to his roots.

Born into a family of middle-class landowners on on April 11, 1887, Roy grew up in Beliatore, an obscure village in Bankura district in West Bengal. Having demonstrated an affinity for art from a young age, he was sent to study at the Government College of Art in Kolkata at the age of 16.

The vice-principal of this college was Abanindranath Tagore (noted artist, writer and the founder of Bengal school of art) and it was under him that Roy trained in the classical western genre of landscapes and studio portraits. This was the prevailing academic tradition of that time and the gifted young lad was quick to learn the style.

This is why Roy’s initial work (in the early 1920s) reflect the influence of Western classical style of art as well as the avant garde Bengal school of art. However, while these works were technically perfect, they lacked a certain energy and enthusiasm.

Realising that he needed to draw inspiration, not from Western traditions, but from his own culture, Roy began experimenting with folk art and indigenous materials.

By 1925, he had become fascinated by the Kalighat style of painting and the unique features of its figures – big almond-shaped eyes, round faces, curvaceous bodies and firm contours.

Painted mostly on mill-made paper with fluid brushwork and vibrant natural dyes, Kalighat paintings are believed to have originated in the vicinity of Kolkata’s iconic Kalighat Temple. The paintings, which depicted mythological Hindu deities, mythological characters, tribal life, and themes from everyday life, were originally sold as souvenirs to temple visitors.

Inspired by the simple beauty of Kalighat paintings, Roy shifted his focus to rural India, especially the Santhal tribal culture of Bengal. He also abandoned the use of European paints in favour of natural mineral and vegetable-based pigments made from alluvial mud, seeds, powdered rock, flowers and indigo.

He even gave up canvas and switched to indigenous painting surfaces such as cloth, woven mats, and wood coated with lime.

As for his technique, Roy used bold, sweeping brushstrokes while painting and restricted his palette to seven vibrant and earthy colours – Indian red, yellow ochre, cadmium green, vermillion, grey, blue and white. His style also had many of the same features as Kalighat paintings but he added his signature characteristics to them.

In addition to this, many of Roy’s paintings (including the famous ‘Cat’ series) drew inspiration from his childhood days in the forested village of Beliatore in Bankura. Interestingly, he also experimented with his sculpting skills, working with wood to create different shapes that depicted the fluid geometry of human anatomy.

In the 1940s, the popularity of his paintings reached an all-time high, with his works becoming prized possessions in both Bengali and European households. They were and still are everywhere in Bengal, from calendars and school bags to Durga puja idols and saris.

However, Roy remained untouched by all the fame and recognition, with his only concern being his art. Out of the over 20,000 works of art Roy painted during his lifetime, he rarely sold any of his paintings for a price higher than ₹350.

If he felt that those who had bought his artwork wouldn’t take care of it the way it was meant to be, he would immediately buy back the works from them. He knew only his art and perhaps this is what gave it that unique earthy quality that made it immortal.

In 1955, Roy was honoured with the Padma Bhushan and Prime Minister Indira Gandhi (one of the many famous admirers of his work, along with Mahatma Gandhi) declared him a national artist.

His artwork continues to be exhibited extensively in national and international exhibitions and can be found in many famed private and public collections. Some of his notable creations include Gopini, Mother and Child, Three Pujarans, Krishna Balram, Standing woman, Cat and the Lobster, Santhal Dancers and Bengali Woman among many others. As for his magnum opus, art enthusiasts consider it to be his 1946 work, Ramayana (spread across 17 canvases, the painting traces the entire epic).

After spending most of his life living and working in Calcutta, Roy passed away in 1972. He left many of his paintings unsigned. However, his unique imprint on the world of art remained indelible.

Also Read: 12 Famous Masterpieces of Art Every Indian Should Recognise