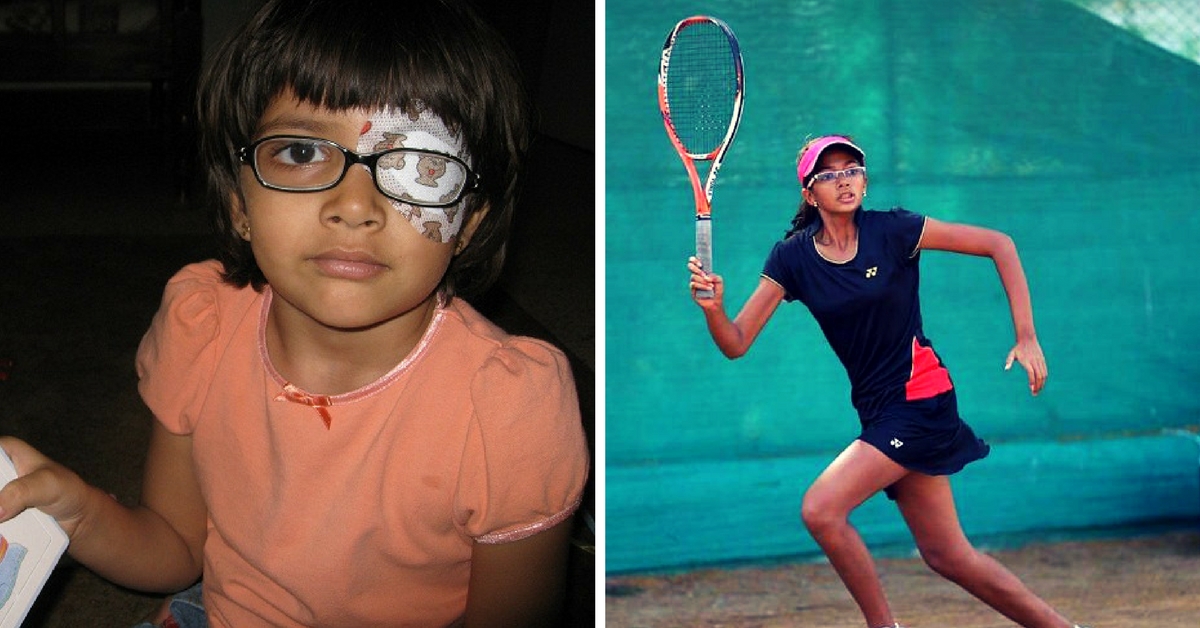 This teenager battled an eye disorder for over five years since she was just four. Today, she is a known face in the under-14 tennis circuit – for all amazing reasons.

Malikaa Marathe, a 13-year-old national tennis champion, was four years old when she was diagnosed with Amblyopia – a condition that could have led to her losing sight in one eye. Today, she proudly holds the number one position in the All India Tennis Association (AITA) rankings in the under-14 category and has big plans of playing at an international level in the future.

Amblyopia, commonly known as Lazy Eye, is a disorder in which a person experiences decreased vision in one eye.

The different causes of the condition include poor alignment of the eyes, an irregularly-shaped eye that makes it difficult for the person to focus, near- or far-sightedness in one eye, clouding of the lens of an eye, etc.

Also Read: This 57-Year-Old is Teaching Children with Disabilities to Swim. Free of Cost.

“In simple terms, Amblyopia leads to the brain preferring the better eye because of which it shuts down the development of the optic nerve in the defective eye. Malikaa was born with this condition and fortunately, it was detected when she was four. If we had let a couple of years pass by, she would have been blind in her right eye,” says her mother Vaijayanti Marathe.

As a course of treatment, the doctors decided to put a patch on her good eye that would force the defected eye to work and its optic nerve would develop again.

Malikaa had to wear the patch for almost four years and she recovered when she was about nine years old.

“Initially when we patched her, she was not able to see properly and she would fall, hitting her head often. It was quiet a scary phase for us and a pain for her. She was small. She couldn’t see. It was very difficult to explain to her what’s wrong with her eye,” says Vaijayanti.

Malikaa remembers those years vividly too. “It was really annoying. I didn’t like that patch and sometimes people used to make fun of me. But my parents had told me that if I don’t do it then I will not be able to see from that eye. So I had no option. Everywhere I used to go people would ask about my eyes,” she recounts.

“I am a dentist. So I would drop Malikaa and her brother at a tennis training centre, go to the clinic, come back and pick them up. So the primary reason was for them to consume their extra energy when they were young so that they would be properly exercised and wouldn’t bother me,” jokes Vaijayanti.

But what started as just classes for fun, turned out to be something that Malikaa was really good at. Her coach at the time, Sandeep Kirtane, who is also a Davis Cup player, told Vaijayanti that Malikaa is talented and they should help her play at tournaments. He played a major role in her success by spotting her skills and encouraging her to compete.

Also Read: How a Former Olympian Is Giving Direction and Life Goals to Orphans. Through Hockey.

The first tournament she participated in, Malikaa won a match and was runner-up in two.

She was not even nine years old at the time, but there was no looking back for her after that. She started playing and winning and became a national champion. With practice, she became better and now has more consistent results.

Recently, Malikaa won an under-18 national series where all other players were 17-18 years old. She came in as a qualifier and went on to win the title. “That was a great tournament for me. I was about to lose the finals but then I made a good comeback. And the semi-final was also one of the toughest matches I have ever played. The score was 6-7, 7-6, 6-7. With three tie-breakers in one match, it can’t get tougher than that,” she says.

This month, she won the finals of the Pune leg of Rendez-Vous à Roland-Garros, an under-18 national series, defeating an under-18 player.

She has now been selected among the top players in the country to play the masters of this series.

A resident of Pune, Malikaa is being trained by Mr. Hemant Bendre. She is a student of class 8 and likes reading, drawing comics and singing. She wants to continue with tennis and will start off with international coaching soon. She must have played about 350-400 matches till date, including those against players from countries like Thailand, Philippines, Hong Kong, Malaysia, and Indonesia. “I liked tennis a lot since the time I started playing it. Then only I had decided that I wanted to be good at the game,” she says.

As for juggling her studies and sport, Malikaa is doing it confidently, and quite well. Coming from a family of a dentist and an engineer, her parents believe that studies are important and she has to maintain that balance. “She cannot give up on education at any level. She has told us that she is very passionate about this and wants to do it, so we are supportive. And the school is also very supportive. But we are ensuring that she is covering up her fundamentals well,” concludes Vaijayanti.