Bengaluru’s Pothole Raja Has Fixed Over 200 Potholes in Less Than a Year. You Can Do It Too!

Launched by a former pilot, the campaign promises to make all Indian roads pothole-free. All it takes is a text to the number +91814 POTHOLE.

From Chandigarh to Kochi, potholes are a perennial problem on Indian roads. And they are hazardous, causing fatal accidents and endangering the lives of sanitation workers and common people. In 2015, over 10,000 deaths were reported to be caused by bad roads. The need for citizen intervention in road and pothole repair is more important than ever.

Pothole Raja, a new initiative based in Bengaluru, has repaired over 200 potholes and shows the way for citizens to take up repairs on their own. 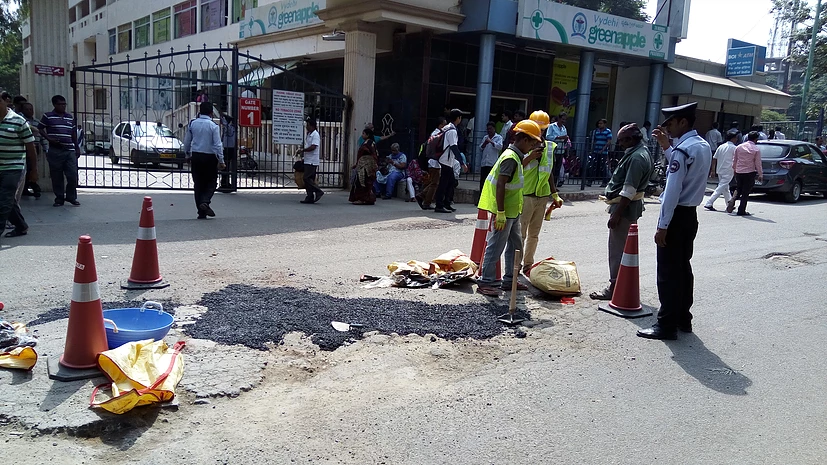 Prathaap B, who launched the initiative under the aegis of his company GroundReality Enterprise, confesses to having an interesting life. He has been a pilot, entrepreneur and mentor. He’s now pursuing a doctorate while teaching at various city colleges and managing the fledgling potholes campaign.

A number of causes triggered the campaign. Accidents and deaths of relatives, friends, and acquaintances piqued Prathaap’s concern in the issue, as he noticed the condition of roads and the challenges in fixing potholes. Always invested in social causes, he decided to take up the challenge himself.

“Our bad roads are a subject of common questions,” he says. “Pothole Raja primarily focuses on citizenship-driven action for infrastructure development, rather than pointing fingers at who’s not doing their job. We also want to impart education. In fact, I was looking at some school projects on social issues and it made me wonder that if children had such wonderful ideas, why couldn’t I do the same.”

Pothole Raja launched with a pilot project in September 2016, at Bengaluru’s Electronic City. Since then, the initiative has spread to other neighbourhoods, IT parks and corporates as people have come forward to participate in the drive.

To repair the potholes in no time, Prathaap eschews regular road-building materials in favour of cold asphalt. Cold asphalt emerged as a potential substitute during initial research for Pothole Raja, which began over a year ago. He embarked on technical research, consulted experts and observed how such issues are solved in countries abroad. Cold asphalt proved a success for portability and ease of use.

“Road repair in India can be a crowded affair with machinery, people, and raw material,” says Prathaap. Fixing a pothole does not require so much effort. With cold asphalt, you can carry small amounts in your car and fix potholes as you spot them.”

All one has to do is fill the pothole with the required amount of cold asphalt. Even running a car over the area will help to stabilize it.

You might also like: This Low-Cost Technology Is Helping a Puducherry Village Treat Its Wastewater, and It Uses Plants!

An industrial material, cold asphalt is usually available for bulk purchase. Prathaap initially received his supplies from a petroleum company and has more recently found a local manufacturer in Bengaluru. Pothole Raja offers smaller quantities of asphalt to those interested in taking up the project.

Pothole Raja relies on a combination of citizen initiative and technology to take action and recruit workers and volunteers. Prathaap is also keen on engaging transgender people in the initiative. “I want to offer them an alternate form of employment, as fixing potholes with (cold asphalt) is neither very labour-intensive nor does it require any particular skill,” he says.

People can report a pothole via the website or by sending a WhatsApp text to the designated number. On the website/app’s live view, red signs signify completed project and green ones represent new ones. As citizens have begun to highlight hazardous potholes, the team is taking up the repair one pothole at a time. A recent message will next lead to a repair drive near St. John’s church.

“We want to enable public-private partnership for infrastructure development,” says Prathaap, adding “I asked myself two questions: how can I add value to society, and what I can do to help.” In recent years, potholes have emerged as a serious crisis, and the solution lies in sustainable planning and maintenance.

You might also like: A Group of Youngsters in Manipur Worked 10 Years to Transform Barren Land Into a Lush Forest

Aiming for more than just voluntary action, Prathaap hopes to engage CSR activities and more actionable initiatives for road safety issues in the future. Ultimately, the mission is simple. “I want to make Indian roads pothole-free,” he says.