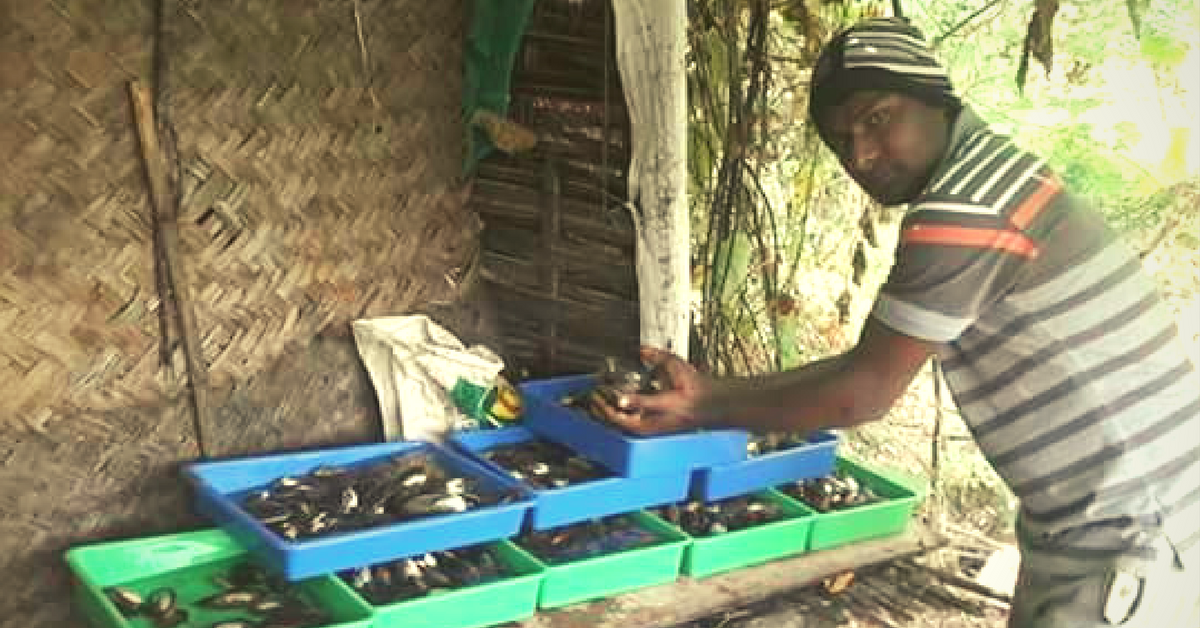 A third-generation farmer from the village in Naxal-affected Gadchiroli district, Sanjay Gandate took a unique path to supplement his erratic earnings from the rice fields – pearl cultivation.

Sanjay Gandate from Maharashtra’s Pardi Kupi village was well aware of this. And that pushed him to try something other than traditional farming, which was completely dependent on the weather.

A third-generation farmer from the village in Naxal-affected Gadchiroli district, Sanjay took a unique path to supplement his erratic earnings from the rice fields – pearl cultivation.

Sanjay’s grandfather as well as his father had always grown rice in their 3-acre ancestral land. As a child Sanjay would visit their farm located near the Wainganga River. There, he would find many shells by the river and was fascinated by stories his grandfather told him about the shells.

“My grandfather told me that pearls are formed inside these shells. He said that when the first drop of the first rain of the season enters the shell, it becomes a pearl. This theory sounded so interesting to me that I started researching on it,” says Sanjay, while talking to TBI from Gadchiroli.

After listening to many such traditional stories about the formation of pearls, Sanjay concluded that something has to go inside the shell when the oyster is alive to form a pearl. He also realized during his research that pearls are not originally white, shiny and round as shown in pictures.

He kept collecting more shells from the river and found some of them filled with a pebble shaped thing covered with sand and dirt. Later, he realized that those were pearls.

In 2000 when Sanjay was in class 11, he started with the next level of his experiments. He would get live oysters from the river and put a tiny pebble in it. He would then put the oyster in a bucket full of water and wait for days. Initially the oysters would not live long but this did not stop Sanjay from experimenting further.

After months of experiments, Sanjay found out that pearls are formed with the chemicals released by the oyster when it feels irritation due to any foreign body inside it.

“Just like our eyes releases tears if there is a foreign body inside it, similarly the oyster releases a chemical which sticks on this foreign body to form a pearl. However, this foreign body should not be so strong that the oyster dies and not so weak that it cannot sustain the chemical’s pressure and moves out of the shell,” informs Sanjay.

Once Sanjay got the results by experimenting on few shells, he rented a freshwater pond. He also gathered the tools from his own household to surgically implement mantle grafts and appropriate nuclei in the internal organs of the oyster.

Once the setup was ready, he fished out almost 5,000 oysters, inserted the pebble-shaped mantle grafts designed by him into each one of them and placed them into the pond.

“It takes around 18 to 20 months to form a good quality pearl. But the conditions are that it should be reared in freshwater and the oysters should be alive till the pearls are formed,” says Sanjay.

To keep the pond clean, Sanjay added fish to it. These fish are also important to provide food to the oysters -the oysters live on the food left by the fish.

For almost nine months Sanjay took care of these oysters like babies. The villagers laughed at him as none had heard about the idea of pearl farming before. But in 2001, at the end of almost 9 months, the oysters were killed by Naxalites.

“The Naxals here don’t like the idea of the locals trying something new. They killed my oysters when I could see the pearls forming inside them and hung them on a nearby tree,” says Sanjay.

“Though this was a major shock to me, it also gave me hope that I can do it. The pearls were formed and they would have been ready in the next few months. This meant that my experiment was successful,” he adds.

For the next few years Sanjay focused on studies. He wanted to become a teacher and hence completed his graduation. But again during his break after graduation he started utilizing his time by fishing oysters and experimenting with pearls.

You may also like : This Innovative Soil-Less System Could Be an Answer to Every Farmer’s Woes

In 2011, he again rented a pond and put thousands of oysters into it. However, this time too the oysters were stolen once the pearls were almost ready.

A determined Sanjay did not stop here. In 2015, he made his own tank in his house, and has grown almost 5,000 pearls last December.

Sanjay has even found mention in the state revenue minister’s address to the legislative council as an example for other farmers.

“The young generation of farmers needs to think out of the traditional farming system. I was stunned to know that Gandate was cultivating pearls to support his declining income from rice fields,” said Revenue minister Khadse while talking on the issue of farmer suicides and drought-affected farmers.

Sanjay, who believes in gathering knowledge, is also a student of 4th year LLB. He is additionally fulfilling his dream of becoming a teacher by conducting workshops and training for other farmers to grow pearls.

“Everyone was opposing me when I started pearl farming again. My parents said that we are poor farmers and we must work on something that gives us cash everyday and not after a year and a half. But they are also happy now with the kind of profit I have made through pearl farming,” says the proud Sanjay.

So far, he has earned Rs. 10-12 lakh from the pearls. He says that this kind of farming requires minimal investment and high returns, but only if the farmer is ready to work hard. Sanjay has invested only Rs. 5,000 to build a freshwater tank in his house. The pearl farmer has also taken some basic training from a scientist at the government’s Krishi Vigyan Kendra to polish his skills.

“I want to give a message to farmers that listen to your heart and mind. Try different forms of farming as well and have faith in yourself. If you work hard and have faith, you will definitely succeed,” concludes Sanjay.

To know more about pearl farming or to attend Sanjay Gandate’s Pearl Farming workshop, you can call him at 9689763821.

You may also like : How a Unique Community Initiative Is Bringing Down Farmer Suicides in Distress-Hit Vidarbha