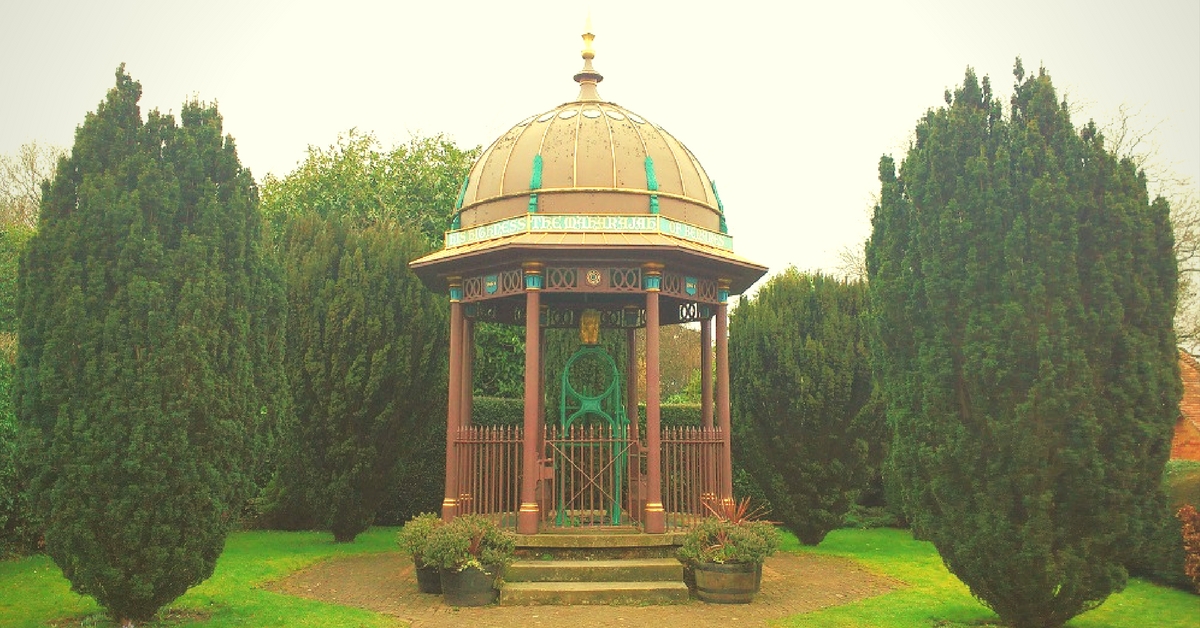 A fine Sunday morning and uncontainable curiosity brought me to the village of Stoke Row in South Oxfordshire within the Chiltern Hills. Prominent road signs lead me to the well, opposite a street named Benaras Grove. The well is protected by a canopy slightly reminiscent of a merry-go-round at first sight.

A rich golden dome is supported by the canopy’s bars, inside which the machinery is topped with a gilded elephant.

The well itself is covered, which crushes my imagination and hopes of peering into a dark, gaping hole in the ground. The words “His Highness the Maharaja of Benaras” are painted onto the dome along with a motif with a moon and two fish, the Maharaja’s armorial bearings.

Also read: MY STORY: After Living Abroad, You Won’t Believe What I Miss the Most About India!

While the gilded numbers “1864” signify the year of completion of the construction, the story dates back to earlier times.

For 34 years in the mid-nineteenth century, Edward Reade, a gentleman from Ipsden, worked as a civil servant in India. In 1831, he helped sink a well in Azimgurh (Azamgarh) and built a mango orchard in the area. When he was the Governer of Benaras in 1857, he struck a close friendship with the Maharaja of Benaras, Ishree (Ishwari) Pershad Narayan Singh. Reade would often tell the the Maharaja stories from the land he grew up in. He told him about the lack of access to clean water and the frequent drought conditions in his home in Oxfordshire.

One story in particular made a huge impact on the Maharaja. When Reade was a child, he came across a boy being beaten up by his mother for having stolen a drink of water in the village of Stoke Row, 5 miles from Ipsden.

This story stayed with the Maharaja and, five years later, he decided to gift a well to the people of the village and its surrounding areas.

The Maharaja, who couldn’t travel abroad due to (quite appalling) ancient religious restrictions, could only envision the project through the photographs and information Reade sent him. The well, 368-feet deep and 4-feet wide, was dug by hand from 1863 to 1864. The Maharaja also funded the planting of a cherry orchard beside the well, which would generate income. This mimicked the Indian tradition at the time, which was to plant orchards close to wells, so that its upkeep could be funded from the sales of the fruit. An octagonal caretaker’s cottage was constructed next to the well, which has been a private home since 1999.

The well gradually fell to disuse after almost a century of service, after the village had access to pipeline water. The orchard is now being used as a forest school and a playground.

A bandstand, restored at the well’s 150th year celebration, also features an Indian elephant carved out of oak.

Next to the well, I see a small box on a wooden post containing an information booklet, “The Maharajah’s Well” by Dr. Graeme Whitehall. From the booklet, I gather that in 1958, the then-Maharaja of Benaras found out that the well still existed in Stoke Row, upon which he presented a marble replica of the structure to Queen Elizabeth II during her visit to India. He extended an invitation to Prince Philip to attend the centenary celebrations in 1964. The Prince participated in the festivities, accompanied by the Maharaja’s representatives, who actually carried with them a vessel of Gangajal (water from the river Ganges) from Benaras! The Gangajal was then ceremoniously poured into the well.

Also read: MY STORY: This is Why I Can Not Stop Travelling by Indian Trains

The Maharajah’s Well in Stoke Row symbolises an intriguing act of charity and is considered to be the first of its kind by an Indian in England. Later, another well was constructed at Ipsden by Raja Deonarayan Singh. Perhaps there are plenty more historical acts of kindness by Indians in places all over the world, waiting to be discovered. Dig a little deeper, and who knows what well-kept secrets we’ll find.

About the author: Ramya Sriram is a cartoonist and writer. She runs The Tap, where she tells stories visually and verbally.
Promotion