Despite US Sanctions, This Aerospace Engineer from Odisha Gave India Its First LCA – Tejas

This is the story of how an aerospace engineer from Odisha developed India's first homegrown LCA against heavy odds. 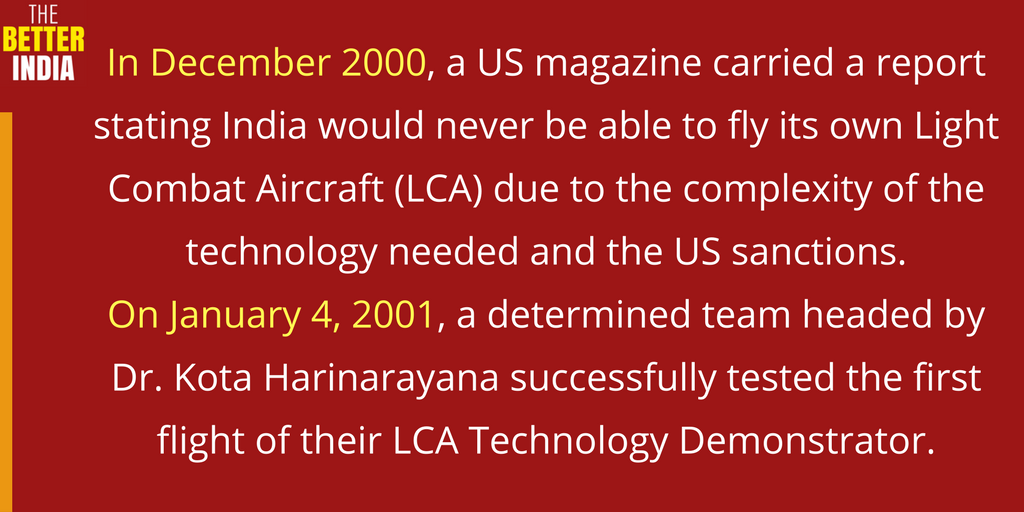 In December 2000, a US magazine carried a report which said that India would never be able to fly its own Light Combat Aircraft (LCA) due to the complexity of the technology needed and the US sanctions. On January 4, 2001, a determined team headed by Dr Kota Harinarayana successfully tested the first flight of their LCA Technology Demonstrator. The then-Prime Minister Atal Bihari Vajpayee named the aircraft ‘Tejas’ which translates to radiance in Sanskrit.

This is the story of how an aerospace engineer from Odisha developed India’s first homegrown LCA against heavy odds. In the early 80s, the country’s political leadership realised the need for an indigenous aircraft to replace the ageing MiG fleet. The ‘Long Term Re-Equipment Plan 1981’ cited that by the mid-1990s, these aircraft would reach “the end of their service lives”. This, in turn, would lead to a 40 per cent shortfall of such combat jets in the Indian Air Force.

In this light, the Light Combat Aircraft (LCA) programme was launched in the 1980s. It had two primary purposes: one was the replacement of the MiG-21s, and the other was to boost the advancement of India’s domestic aviation capabilities.

Back then, no single organisation had the capability to develop such an aircraft by itself. The makers of the last indigenous fighter jet, the HF 24 in 1961, had shut shop. Hence, the only way for the LCA programme to succeed was to start from scratch.

In 1984, the government appointed the Aeronautical Development Agency (ADA) to handle the LCA programme along with Hindustan Aeronautics Limited (HAL) and other institutions. At that time, V.S. Arunachalam was the scientific adviser to the defence minister. A former scientist at Defence Research and Development Organization (DRDO), he, in turn, chose a young design engineer from Odisha as the director of India’s fledgeling indigenous aircraft programme. Born at Badabazar in Berhampur district of Odisha in 1943, Kota Harinarayan completed his school education from City High School before cracking both engineering and medical entrance exams.

He chose to pursue engineering and obtained a degree in mechanical engineering from Banaras Hindu University.

Attracted towards a career in aerospace from a young age, he followed this by joining the Indian Institute of Science in Bengaluru for a course in aerospace engineering. Later, he joined Hindustan Aeronautics Limited (HAL) in Bangalore, India’s largest plane-maker, as a design engineer.

Also Read: A 40-year-old Pilot Assembled This Aircraft all By Himself – on the Terrace of His House

In 1982, Harinarayan was working as the chief designer at HAL’s Nasik division when he was selected by Arunachalam as the Director of DRDO’s Aeronautical Development Agency. At that time, there simply wasn’t enough aeronautical talent in DRDO. True, HAL had built a fighter aircraft called the Marut in 1961 but it was designed by a German team (it remained in service till 1990).

So, his first step was to bring together the country’s best talent in the field of aerospace engineering. For this purpose, he recruited engineers, scientists and professionals from twenty educational institutions like the IITs and forty Research and Development (R&D) laboratories like HAL and CSIR. In a year, ADA had a team of about 400 engineers and scientists. Now the team was in place but another problem cropped up — it did not have the right computer for designing. So Rajiv Gandhi, then prime minister, stepped in. During his visit to the United States soon after, he convinced President Ronald Reagan to give the IBM 390 computer for the design work of the Tejas.

ADA next bought CATIA (computer-aided three-dimensional interactive application), the computer-aided design software developed by Dassault, in the early ’90s. However, when ADA started its work, it had a tough time buying electronic components since several embargoes and sanctions had been imposed on India by Western nations in reaction to the Pokhran tests.

This, however, made the team more determined to accomplish their difficult task of designing each element of the design, each raw material for the plane, from scratch. Since the Tejas was meant to be a light aircraft, the designers had to use carbon composite materials which were still under development.

Not having the software for designing and analysing composite materials, ADA developed one for itself, which it later marketed extensively — Airbus was a customer, buying it for the A380 and other aircraft! The next step was to identify companies that could produce the components. Furth India, a small Nagpur company, produced the steel while another small outfit in Kanpur made rubber seals used to close the fuel tank. Gradually, ADA developed all the electrical components that were earlier imported and helped local companies manufacture them. To make production commercially viable, the rights to the intellectual property were handed over to the companies.

For the design, the team chose a compound tail-less delta wing configuration, different from other aircraft of this class. Advanced features like Relaxed Static Stability were added to enhance manoeuvrability. Cutting-edge digital technology was used to design the cockpit’s system, the utility system and the weapon management system. All these core technologies were designed, developed and built in India itself. The Tejas project also became a cementing force between industry and research institutes. For example, instead of importing the multi-functional display for the cockpit, ADA approached Bharat Electronics to manufacture it. Though BEL was interested, it did not have adequate knowledge about the liquid crystal display (LCD) used in the product.

So ADA asked the Raman Research Institute, one of the pioneers in liquid crystals, to help out.

It was a historic day – Indian skies were seeing an indigenous aircraft after almost 40 years. Image: Dr. Kota Harinarayan was honoured with a Padma Shri in 2002.Photo Source

From 2001 to 2009, Tejas improved itself gradually in its speed and target accuracy. It went through a lot of changes and updates both in technology and weapon systems. After several tests and multiple prototype vehicles making successful flights, the Tejas received its certification for release to service in 2011, 28 long years after its conception. On January 10, 2011, it was certified and cleared for combat service.

On January 21, 2016, Tejas participated for the first time in an International Air Show in Bahrain. Here, it won the admiration of aviation experts and visiting Air Force teams from across the world. By this time, it had flown 3061 sorties adding 1,954 flight hours without a single accident. A rare global achievement, this is a testament to the quality of the aircraft design and development. On July 1, 2016, after waiting in the wing for over 15 years since its first flight, two Tejas fighters were finally inducted into IAF’s No. 45 Squadron, better known as Flying Daggers. Signalling the beginning of a new era in country’s military aviation, the squadron has been fine-tuning all aspects of flying, ground-handling and repair of their new fighter plane at their base in Bengaluru.

For the man who had seen the Tejas take flight from the drawing board into the skies, it was a moment of immense joy and pride. Kota Harinarayan’s dream of seeing the LCA being inducted into IAF had finally been fulfilled.

Also Read: The Little Known Story of How India’s First Indigenous Supercomputer Amazed the World in 1991