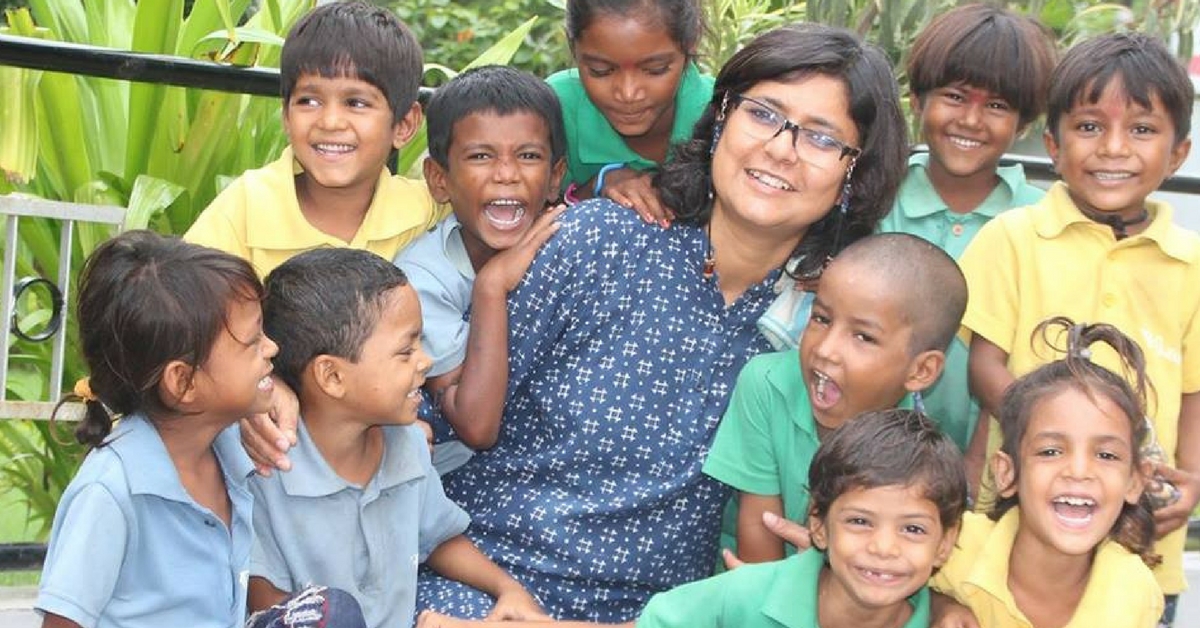 Juin Dutta has lived in Vadodara for close to two decades, when the city was still known as Baroda. “There was a cluster of migrant worker families living near my building,” she says. “I would watch them go to construction sites, taking their children along. Sometimes, the kids would be put to work too and they were hardly 14 years old. ”

Many might move on from such sights with a mixture of guilt and helpless that “things are as they are.” Juin took the path less travelled.

Juin, who quit her job as a school coordinator to start the initiative under the aegis of her organisation Srotoshwini Trust, first began teaching kids of migrant workers in 2013. Her first classroom was the construction site itself where the kids spent the day with her parents.

“When the construction was completed in 2014, many of the children left with their parents,” she says. “But some parents asked if they could leave their children with us. Nine children stayed behind and we created a hostel for them. They are still with us—they are like our children now.”

You might also like: Two Friends Are Improving Lives of Over 1,500 Special Kids Through a Beautiful School in Dehradun

The project laid the groundwork for Juin and her fellow members to start their schools. The setup was at its most basic — three schools were gradually set up in Fatehganj footpath, Sardar Estate footpath and Parshuraam Bhatta.

“The children were enrolled in government schools, but they could barely even read,” says Juin. “We divided them into primary classes on the basis of their abilities. We focus on Gujarati and maths for the basic classes, and the brighter students are taught English, general knowledge, and basic science in special advanced classes.”

The classes are conducted free of charge, and students are provided with basic essentials like meals, books and stationery items. From being barely literate, the children have now begun to read and improve as students.

Today, over 100 children of various ages have learned to read and write thanks to the Pathshala initiative.

Things changed for the better in 2016 when Juin received support from the City Police as part of its Suraksha Setu project. As part of the assistance, the Pathshala classes could be run in the city’s Police Training School. They also received meals and partial remuneration for teachers.

“It was going very well, as we had a permanent place to hold classes,” says Juin. The arrangement also made it possible for the children to engage in sports and participate in co-curricular activities.

Unfortunately, the collaboration came to an end this January, taking the mobile schools back to the street. “I’d gone to meet the new commissioner when I heard the news. It was a big blow for us, and we are a little desperate but optimistic that we will find a new permanent school.”

Juin and her team are now pinning their hopes on a crowdfunding campaign to raise money for the school building.

The Pathshala classes have also paved the way for Juin to expand on other projects.

The projects have expanded to include the parents of these children. “We started working with the mothers of Pathshala students to create ethnic bedspreads and accessories. The products are made under the brand came Churni Collection and sold via exhibitions and online mediums. We keep only the cost of materials and give away the profits to the women.”

You might also like: Women in a Haryana Village Are Taking on the World. With a Little Help From Delhi’s LSR College

The Trust also hopes to build a bigger hostel for underprivileged children in the future and prepare their children for further studies in formal schools.

At present, however, a new school building takes priority and Juin has dedicated her time to raising funds for the students. “We simply want to make sure every child, even those on the streets, learns to read and write,” she says.

Contribute to the Srotoshwini Trust’s crowdfunding campaign here. To get in touch with Juin, click here.