There Is an Airbus A320 in the Middle of Ludhiana in Punjab. And It’s a Restaurant!

The restaurant, named Hawai Adda, is the first of its kind in India, and can seat up to 65 people.

If you are ever in Ludhiana, Punjab, chances are you might end up seeing something rather unusual – a large plane parked in the middle of the city far away from any airport base. That’s because while it really is a plane, it also happens to be a restaurant.

Well, one family in Punjab decided to buy an old plane and convert it into a fine-dining multi-cuisine restaurant, because why not? The restaurant named, Hawai Adda, is a first of its kind in India. 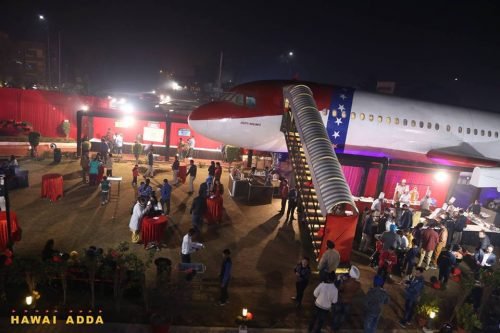 Before it was an eatery, the plane used to be an Airbus A320. Now it can seat up to 65 people as they dig into delectable delicacies. Jaswinder Singh, the managing partner of the restaurant, spoke to Hindustan Times explaining, “I acquire scrapped planes and turn them into themed entertainment venues. In Punjab, it’s the first such project, and the first such restaurant in India. Specialised engineers put it together, and then the interiors were done in about four months.”

In order to get the plane from Delhi to Ludhiana without damaging it, different parts of it were transported in four trucks. And in the lawn where it remains parked, there is also a cafe, a banquet hall where parties can be held and a cafe as well.

You may also like: Suffocating in Delhi? Find Your Way Into This Building That Manufactures Its Own Clean Air!

But of course most of the restaurant’s patrons prefer eating inside the plane according to the owners. In fact, Hawai Adda has become so popular that the team behind the restaurant are making plans to open different editions of the eatery across Punjab and maybe beyond.

Think the idea will fly?