The flash flood disaster that struck Uttarakhand on 16 Jun 2013 had jolted the entire nation. It had emotionally touched many a heart at far off places across the country, and motivated many people to come up with help and positive actions, as we have shared before on our Uttarakhand Diaries series. This is the story of a group of doctors and volunteers from different parts of the country who came together for a noble cause of helping the disaster affected in the Himalayan State of Uttarakhand.

The flash flood disaster that struck Uttarakhand on 16 Jun 2013 had jolted the entire nation. It had emotionally touched many a heart at far off places across the country, and motivated many people to come up with help and positive actions, as we have shared before on our Uttarakhand Diaries series. This is the story of a group of doctors and volunteers from different parts of the country who came together for a noble cause of helping the disaster affected in the Himalayan State of Uttarakhand.

A socially conscious doctor duo of Dr Renu and Dr Sripriya Rajan from Chennai were fervently wanting to do something for the affected people. They tapped their ex-army friend, Capt (Retd) Ram Kumar, who willingly joined them leaving behind his hectic business activities. Together they hit upon the idea of conducting a Medical Camp in the disaster affected areas. Dr. Sripriya explains:

Our endeavor was, to be able to reach out to people ,who ,we felt were in need of medical help ,and do what little we can in our own way . In that process , we have had the humbling experience of stepping out of our offices and understanding what a natural calamity can do to disrupt the life of common people. 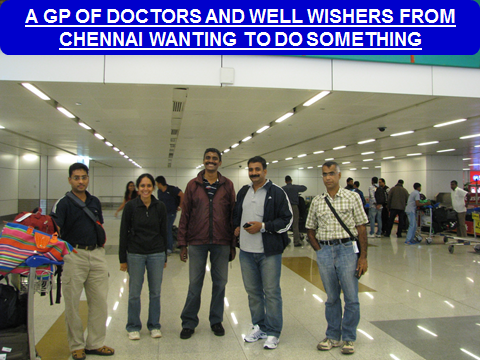 The flash floods had devastated the Garhwal Himalayas, cutting off all major road communications. Even the army was finding it difficult to reach remote villages in the mountains. Local administration and NGOs could not do much in these circumstances. The heavy rush of NGOs with their aid stores got stuck at the nearest road block and they mostly unloaded their wares nearby and left. The real needy ones were still yearning for the proverbial help.

Capt Ramkumar, with the help of his army friends, contacted a local NGO, Vishvanath Poorva Sainik Kalyan Samiti, an ex-servicemen welfare society based at Uttarkashi. Major (Retd) Jamnal, the patron of the NGO, was an energetic and enthusiastic local social worker who volunteered to provide the local backing to Medical Camp but only on one essential condition; that the camp must be held at inaccessible and completely cut off upper regions of Uttarkashi. He suggested Bhatwari block, which was 40 kms away from the nearest road head, involving a good 6-hour trek. The Chennai doctors sportingly accepted the challenge and started working diligently.

Once Dr Sripriya and Capt Ram had firmly committed themselves for the adventurous journey to high Himalayas, a flurry of activities commenced. A large number of their colleagues and friends volunteered to join their mission or to help them financially or donate medicines. Dr Jayashree Narasimhan, a pulmonologist, Dr Jyothi Shankar, a laproscopic surgeon, Dr JK Reddy, Pediatrician and Mr Krishna Kumar, a businessman friend of Ram committed to join them. One Mr Ganji and his family from Erode donated medicines worth Rs 3 lacs. Few colleagues chipped in with finances and Appollo Hospital, Delhi offered medicines worth about Rs 5 lacs.

As per the final plan, the six member team was to reach Uttarkashi by 17 Aug, move on foot to Bhatwari and set up Camp on 18 Aug and thereafter run it for 4 days from 19 to 22 Aug 2013. As the day approached, the support and scope increased beyond every one’s imagination.

When the actual journey began on 16 Aug ‘13, the final count of medicines was 91 cartons, occupying a TATA 407 mini truck, worth over Rs 12 lacs. The team was joined by a few soldier well-wishers from Indian Army who volunteered for the camp in their leave period. Major Jamnal had by then assembled an umbrella organisation of NGOs – Apada Pravandhan Swayam Sahayata Samooh, in order to channelise all resources and energies of different NGOs working in the area. They all eagerly agreed to join the team in organising the event. He had also roped in a team of doctors from Tata Chemicals, a local dentist and two AYUSH doctors too.

The heightened activities and news about the Camp had reached the local administration too. Distt Magistrate of Uttarkashi, Dr Pankaj Pande and Mr Sridhar Babu, the Distt Commissioner for Disaster Mgt, came forward and offered all governmental assistance for the Camp. That was most encouraging news for the Team. The DM had made available the entire premises of PHC at Bhatwari with their staff of about 10 for the entire duration of Camp. In addition, the administration provided about 40 porters for transporting the medicines across the 40 km stretch. The most significant assistance was the provision of 10 sorties of helicopter lifts from Uttarkashi to Bhatwari and back for the Team members and medicines. It was an unexpected gift from a grateful administration but without which the team would have had a much tougher struggle.

The weather played havoc and the continued landslides at Neelu Pani near Darasu Bend made the move of the team to Uttarkashi almost impossible. However, the youthful enthusiasm, daring spirit and sheer courage in the face of lurking danger, saw the team pass through the land slide on foot at night. Every member vividly remembers the 30 km long cattle-class night journey in the body of a TATA 407 from Neelu Pani to Uttarkashi.

The medical Camp started on a high note. The heavy rush on the very first day was not anticipated. People came from far and wide. There were almost 500 on the first day. On the second day, the crowd became unmanageable, touching over 800. The doctors had to forgo their lunches for the sake of the people who had come after trekking for almost 5 hours. They were ready to wait for any time.

The PHC activated all its tentacles and functioned much beyond its capability. The lab conducted 228 tests, there were about 11 minor surgeries conducted by Dr Sri Priya and Dr Jyothi Sankar. Dr Dinesh, the dentist, did 113 tooth extractions. Over 300 children were seen by Dr Reddy, the pediatrician, including few serious cases. The pharmacy with medicines worth over Rs 12 lacs was manned by a few qualified pharmacists. The support staff included volunteers from SBMA, Azim Premji Foundation, Tata Relief, Sahil Delhi, SPHERE, Shrishti, Pregya Gurgaon, etc. By the afternoon of 22 Aug, doctors had examined 2398 patients and over Rs 5.5 lacs worth of medicines were distributed.

It was an amazing experience to work in the midst of people whose background and personal lives were totally unknown to me.It was truly rewarding to work for genuinely needy children and innocent people.Each moment of the camp has touched and transformed my life. The team spirit was incredible.Though I am a pediatrician, the care and concern the team showed me was equal to that one would extend to a child.

For the people of Bhatwari Block, the Medical Camp by Chennai Doctors’ Team was a god-sent gift. The quality and high number of doctors, its long duration, the high quality and abundance of medicines and its conduct at inaccessible location will stand out for its uniqueness.

The doctors from Chennai returned from the Camp with the satisfaction of having done something for the genuinely needy people. It had been a unique and memorable experience working for the disaster affected people of high Himalayas surmounting numerous odds and difficulties. In fact, there was a perceivable positivity in the atmosphere during the Camp right from its inception till end. The enthusiasm, joy and happiness was contagious and pervasive.

Back in Chennai, the experiences of the team members have been received with much admiration and awe, prompting many more to volunteer for similar missions in future. The talks are already on for the next camp. So much so for the good Samaritans from distant lands.

Joby Joseph has been working in the Defence sector for the last 22 years and been long associated with people of Garhwal Himalayas. He keenly follows the social and developmental sector in Uttarakhand. Currently he is working in a remote area in Assam.