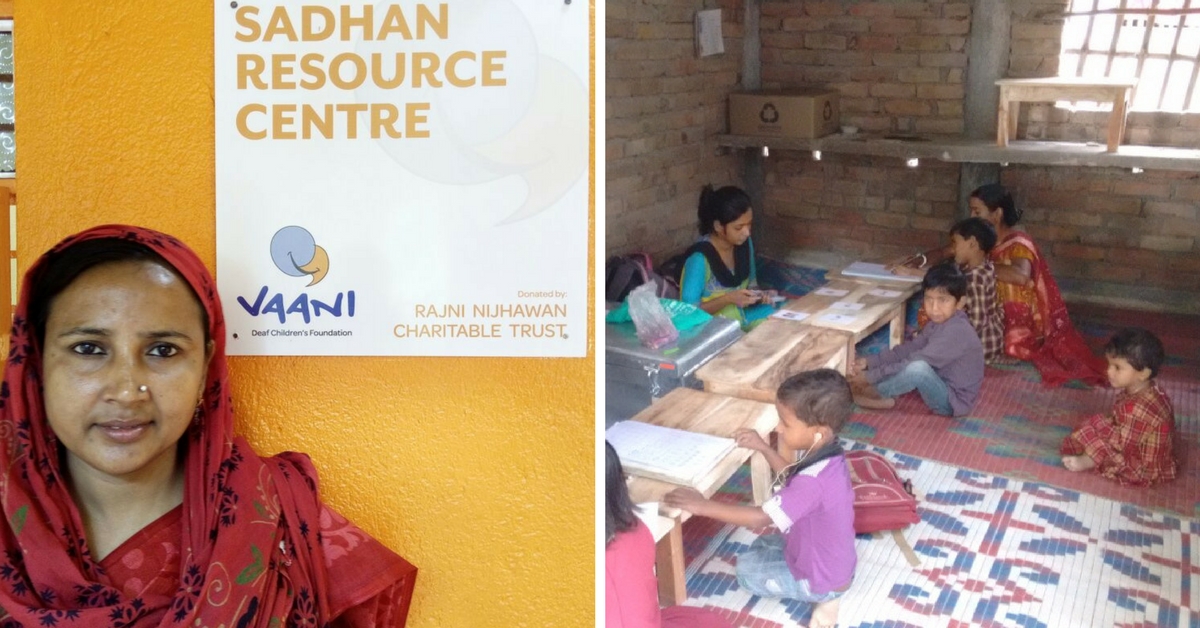 The pinnacle of empowering disabled individuals and their families is when parents of deaf children take the initiative to be leaders in their own communities. Muslima Bibi and the Malancha Sadhan Resource Centre are shining examples of such inspirational stories.

Muslima Bibi is a young mother of three. She lives in a little village near Malancha, 56 km. from Kolkata. Four years after she had her second son, she discovered that he was deaf. She spent the next four years going from one facility to another across the state, but was unable to find the right kind of help. The pain of not being able to communicate with her child was growing. She eventually heard about Vaani and decided to visit. Just around that time, she had her third son, who she later found out was deaf too. She has since been bringing both her deaf sons to the Vaani Sadhan Resource Centre in Kolkata diligently, despite having to travel three hours one-way for each trip.

Once the news about finding the right kind of services for her children spread across her village, other parents of deaf children began to approach her for details. But for most of them, the 3-hour travel was too much. Muslima began to see the need for such services in her village, and decided to take the initiative. Little over a year ago, she approached Vaani to start services in Malancha. She offered up her cowshed as space, and identified four other deaf children who would attend. Vaani started sending her one Teacher of the Deaf for one day of the week.

For months, she made it work under the cowshed. But it really was just a cowshed. It was unsecured, and had no doors that could be locked.  After each day’s lesson, Muslima would lock all the teaching and learning materials in a box, and keep it away in her house. She would also unhook the fan and light so that it would not be stolen. During the rains, the roof would leak and damage the toys and materials. Muslima and the other parents expressed their wishes to have a pucca structure, and expanding it to accommodate growing numbers. They also wanted to make their Link Centre a self-reliant one.

Vaani took Muslima’s story of courage and initiative to prospective donors. Soon enough, the Rajni Nijhawan Charitable Trust picked up on it. They were so moved by the story that they decided to fund the entire renovation of the cowshed, and a second room to accommodate the growing numbers. Without the generous support of the Rajni Nijhawan Charitable Trust, Muslima’s dream would not have materialised.

Construction began on the new Malancha Sadhan Resource Centre in November 2015. Slowly and gradually, the structure took shape, rising from its foundations. The parents of Malancha contributed in any way they could.

Despite challenges along the way, the structure was finally completed mid-2016, giving the kids of Malancha a new place to study and learn and develop.

This two-year long journey turned out to be one of the most gratifying and reassuring experiences for everyone involved in the venture. It proved that if organisations persevere, their beneficiaries will take their work forward themselves. Seeing parents take the initiative to give back to their communities is always lovely and inspirational. It nurtures a sense of camaraderie, and lets every parent know that they aren’t alone in their struggles. The team at Vaani is hopeful of what the future holds for the deaf children of Malancha.

You can help Vaani make more such dreams come true by donating here.