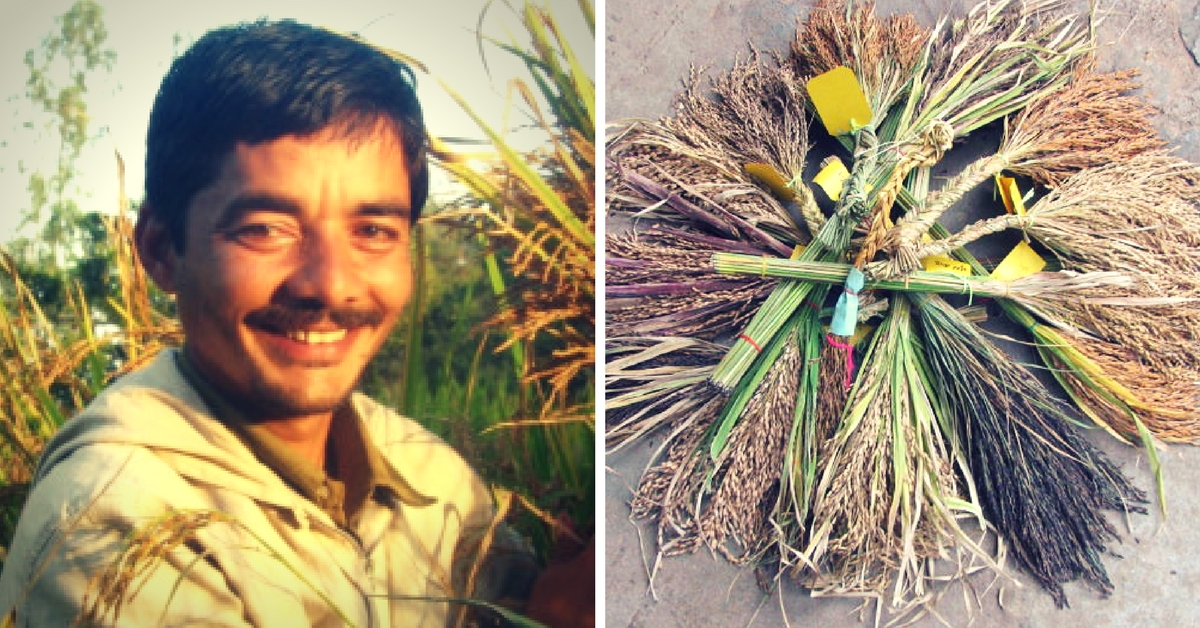 Syed Ghani Khan is a museum curator who resides in a small village in Mandya district. His initiative is a unique one -- a living museum where over 850 varieties of rice and about 115 varieties of mangoes are being conserved and cultivated. The farmer hopes to reintroduce the lost traditional varieties and bring back the lost wisdom of our ancestors to this generation of farmers.

He studied archaeology and museology, dreaming of opening his own museum where he could host curious visitors and impart knowledge about several ancient traditions.

In Pic above: Syed Ghani Khan

When he was 22, Syed’s father had a brain haemorrhage, which left him in charge of the family and the farm as the eldest of the siblings. Syed took up farming and made up his mind to say goodbye to his dream forever.

He started using hybrid farming methods to grow rice like many other farmers in his district. One day, while spraying his crop with pesticides, he had a dizzy spell and fainted. That was the day when realisation hit him.

“People call us farmers ‘anna daata’ (provider of food). But that day I realised that I am not anna daata; I have become visha daata (someone who feeds poison). With all these fertilisers and pesticides, I am growing nothing other than poisonous food. That was when I decided to change my ways,” says Syed.

Also read: TBI Blogs: One Year on, Sikkim Proves Why the Rest of India Must Adopt Organic Practices for a Bright Future

He began using organic compost, but after a few months, he saw no visible effect on his crop. When he looked into the matter, he realised that the crop grown from hybrid rice seeds wasn’t affected by the natural fertilisers at all. He then decided to switch to the more nutritious local traditional rice varieties that would suit the traditional cultivation methods.

His collection started with a rice variety that no one was able to recognise. A scientist helped him identify it as a native variety of rice that used to grow a long time ago in Mandya but had since been lost.

“I felt concerned, you see! I had heard of so many different varieties while growing up in a farmer family, and now when I wanted to cultivate these varieties, I was finding out that they no longer exist? Something needed to be done about this,” says Syed.

He started tracing these lost varieties of rice, collecting, conserving and even cultivating them.

In Pic above: Different varieties of rice

That was when the thought of realising his dream of becoming a museum curator occurred to him, by creating a unique living Rice Museum.

He found a handful of rice varieties in the nearby villages of Mandya district but didn’t stop at that. He travelled to the neighbouring districts and states in search of the rice varieties. Within a span of 4 years, he had collected, grown and conserved over 140 unique rice varieties, retaining the unique taste, aroma, colour, size and shape of each variety.

The traditional varieties have many advantages over the hybrid ones.They require less water. Some even have medicinal properties.

“The naturally grown rice varieties have adapted to different climatic conditions and therefore can withstand disasters like floods and droughts that usually destroy the hybrid crop varieties. I select the best of seeds and every year I plant, grow and multiply these seeds to share those with farmers. I am trying to educate the farmers about the importance of these traditional varieties. I don’t give my seeds to big seed companies even when they offer a lot of money,” he says.

After years of perseverance, Syed is now well known among the farmers, who actively seek his advice.

Pic above: Syed is the proud curator of his museum.

Located in the Kirugavulu village of Mandya district, Syed’s Rice Museum as well as the ‘Bada Bagh’, an orchard renowned for growing over 116 varieties of mangoes, have become must-visit spots for farmers as well as agricultural researchers. His rice museum boasts of more than 850 indigenous rice varieties from all parts of the country.While most of the varieties of rice originate from India, the museum is also home to varieties from Myanmar, Thailand, Pakistan and several other parts of the world. Syed has transformed the farm into a bio-diverse ecosystem, which is host to over 60 species of birds. Maintaining this living museum and perpetuating the lost knowledge to the future generations is his only passion.

Syed Ghani Khan has started a fundraiser for his rice museum. To support his cause, click here.