On National Girl Child Day, here are the inspiring stories of 14 of India's most respected female soldiers. With their impressive records, they have established new frontiers for women in combat!

In the recent years, India has been taking steps to crush gender barriers in its armed forces by enabling women to serve on-board submarines, in ground combat positions and tank units. In February 2016, President Pranab Mukherjee announced that women will finally be allowed to take up combat roles in all sections of the Indian armed forces, signalling a radical move towards gender parity in one of the world’s most male-dominated professions. With the IAF already training women pilots to soon fly fighter jets, the decision to induct women in combat roles in both the navy and the army will provide another opportunity for women to break the glass ceiling. However, even earlier, women hailing from different backgrounds and regions in India have overcome huge odds to flourish in the armed forces.

On National Girl Child Day, here are the inspiring stories of 14 of India’s most respected female soldiers. With their impressive records, they have established new frontiers for women in combat!

Born into a Punjabi family that moved to Saharanpur in Uttar Pradesh during Partition, Punita Arora is the first woman in India to don the second-highest rank, Lieutenant General of Indian Armed Forces, as well as the rank of Vice Admiral of Indian Navy. Earlier, she was the commandant of the Armed Forces Medical College in 2004, the first woman at the helm of the institute. She also co-ordinated medical research for the armed forces as additional director-general of Armed Forces Medical Services (AFMS). Later, she moved from the Army to the Navy as the AFMS has a common pool that allows officers to migrate from one service to another depending on the requirement.

In February 2011, Lt Col Mitali Madhumita became India’s first female officer to receive the Sena Medal for gallantry, a decoration given to soldiers for exemplary courage during operations in J&K and the northeast. Madhumita, who was leading the army’s English Language Training Team in Kabul, was the first officer to reach the Indian embassy in Kabul that came under attack by suicide bombers on February 2010. Though unarmed, she literally ran close to 2 km to reach the spot, personally extricated nearly 19 officers of the Army training team who were buried beneath the rubble and rushed them to hospital. 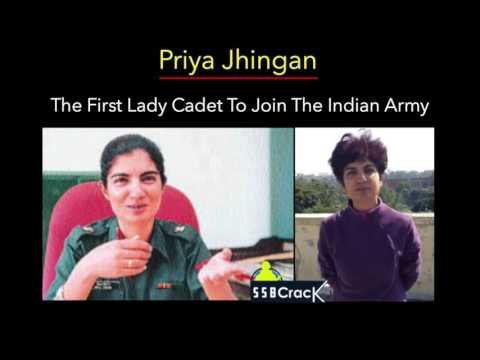 On September 21, 1992, the feisty Priya Jhingan enrolled as 001 — the first lady cadet to join the Indian Army. A law graduate, Jhingan had always dreamt of joining the army. In 1992, she wrote a letter to the Army Chief himself, asking him to let women in. A year later, he did, and Jhingan and the other 24 new female recruits began their journey. When she retired, she said, “It’s a dream I have lived every day for the last 10 years.”

At the age of 21, Divya Ajith Kumar beat 244 fellow cadets (both men and women) to win the Best All-Round Cadet award and get the coveted “Sword of Honour,” the highest award given to a cadet of the Officers Training Academy. To achieve the “Sword of Honour,” one must triumph the merit list, which comprises of P.T. tests, higher P.T. tests, swimming tests, field training, service subjects, obstacle training, drill tests, cross-country enclosures, among other things. The first woman to win this honour in the history of Indian Army, Captain Divya Ajith Kumar led an all-women contingent of 154 women officers and cadets during the Republic Day parade in 2015.

Flight Lt Nivedita Choudhary became the first woman from the Indian Air Force (IAF) to summit the Mt. Everest – and the first woman from Rajasthan to achieve this feat. It was in October 2009 that Choudhary, an IAF officer who had just joined the squadron in Agra, chanced upon a broadcast calling for volunteers for IAF’s women expedition to the Everest. She volunteered, without realising that, three years later, she would do what no woman in the air force had ever done. The other women on her team, Squadron Leader Nirupama Pandey and Flight Lieutenant Rajika Sharma, climbed the peak five days later.

Scripting history as the first Army jawan’s wife to join as an officer in the armed forces, Priya Semwal, (who lost her husband in a counter-insurgency operation, was inducted into the Corps of the Electrical and Mechanical Engineering (EME) of the Army as a young officer in 2014. The 26-year-old mother of the then 4-year-old Khwahish Sharma, Semwal’s future looked bleak when she heard of the death of her husband, Naik Amit Sharma serving with the 14 Rajput regiment, in a counter-insurgency operation near hilly Tawang in Arunachal Pradesh in 2012. She then decided to join the army in memory of her husband and his love for his motherland.

In 2006, Deepika Misra became the first IAF woman pilot to train for the helicopter aerobatic team, Sarang. It was during her passing out parade at Air Force Academy in December 2006 that Deepika Misra, then a Flight Cadet, first fell in love with the aerobatic displays by the Surya Kirans and Sarang, IAF’s fixed-wing and rotary-wing aerobatic display teams respectively. When the IAF sought women pilots to volunteer for the Sarang team in 2010, she jumped at the chance and was among the first to be inducted into the indigenous Advanced Light Helicopter squad.

Lt Col Sophia Qureshi of the Corps of Signals created history when she achieved the rare distinction of becoming the first woman officer to lead a training contingent of the Indian Army at Force 18, the ASEAN Plus multinational field training exercise held in 2016. She was also the only woman officer Contingent Commander among all ASEAN Plus contingents present for the exercise. An officer from the Corps of Signals of the Indian Army, 35-year-old Qureshi was selected from a pool of peacekeeping trainers to lead the Indian contingent.

Sapper Shanti Tigga was no ordinary woman. She was the first female jawan in the Indian Army, and she achieved this feat when she was 35 and had two children. During the physical fitness tests during training, she defeated all her other male counterparts. She completed the 50m run in 12 seconds during her tests and outran all of her other male counterparts to complete her 1.5 km run with 5 seconds to spare. Her expertise in handling guns earned her the highest position of marksman. The best trainee of her batch, Tigga joined the 969 Railway Engineer Regiment of Territorial Army in 2011. Although she met with a tragic death, she shall always be remembered for her prowess and valour.

Lieutenant Ganeve Lalji, a young intelligence officer, created history by becoming the first woman to be appointed as a key aide to an Army Commander. A third generation Army officer, Lt. Lalji was commissioned in the Corps of Military intelligence in 2011 and recorded several achievements during her training course at Pune. Selected from 350 shortlisted women officers, Lt. Lalji is also a keen adventure enthusiast and has undergone mountaineering and skiing courses at Western Himalayan Mountaineering Institute, Manali.

During the Kargil War, Flight Officer Gunjan Saxena made history by becoming the first woman IAF officer to fly in a combat zone. In 1994, Gunjan Saxena was one of 25 young women who formed the first batch of women IAF trainee pilots. During Kargil, Saxena flew dozens of helicopter sorties through the war zone to air-drop supplies to troops and evacuate injured Indian Army soldiers. Later, she became the first woman recipient of the Shaurya Vir Award, a gallantry award presented for valour, courageous action or self-sacrifice while not engaged in direct action with the enemy.

Also Read: The Forgotten Story of the First Indian Air Force Women Pilots Who Flew in the Kargil War Zone