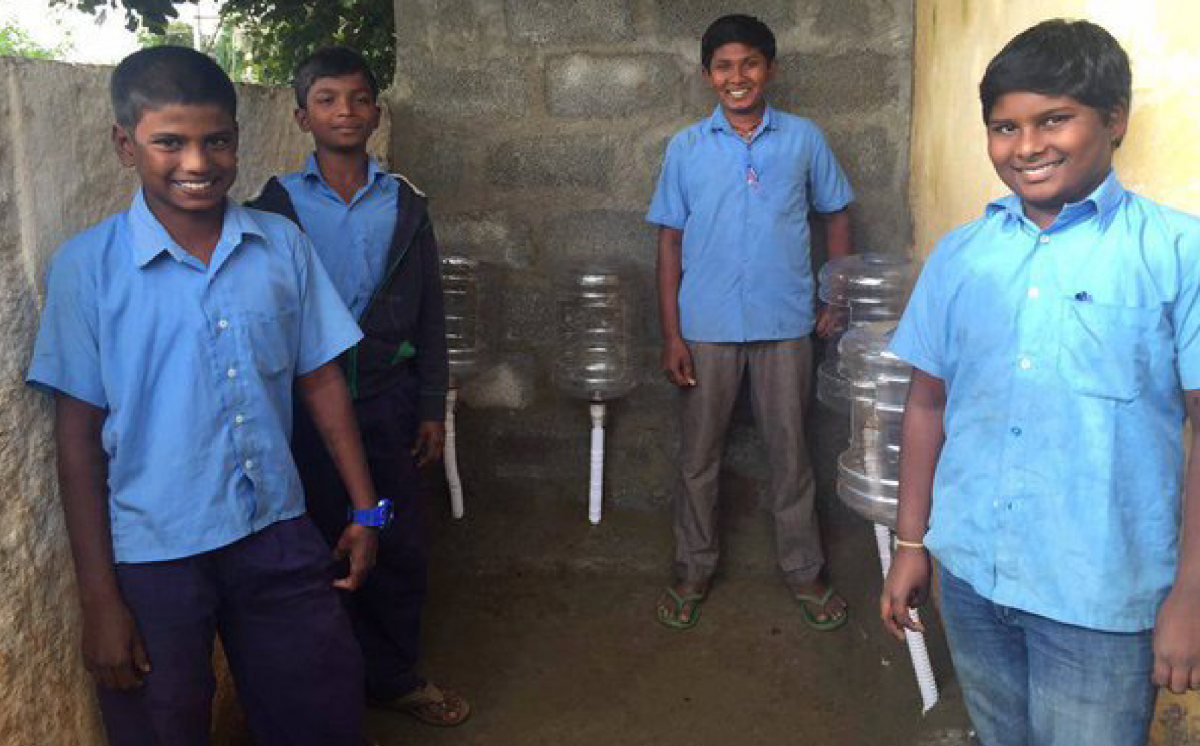 Many government schools across India suffer from poor facilities, including terrible sanitation facilities and urinals. A new innovation is helping schools overcome this issue – waterless urinals for boys.

Sanitation is not a set of facilities, it is an experience. Working in government schools gives you the opportunity to observe from close quarters the everyday challenges in sanitation that government school children face.  The first thing you would notice in this regard is the existence of toilets without urinals. In many schools, toilets for boys are constructed without urinals. Students are expected to urinate on the wall. Flushing means throwing a bucket of water on this wall. To make matters worse, in some schools flushing means fetching water from a tap 10 m. away from the toilet.

The result? Toilets everywhere are mostly dirty, smelly, and very poorly maintained. Students, rendered incapable of differentiating between relieving themselves inside and outside the toilet since both essentially mean urinating on a wall, would end up urinating in the open. The toilet is seldom clean, and eventually falls into neglect. The purpose of the physical infrastructure would thus be completely lost.

In the process, one also loses the precious opportunity to mould young children into responsible citizens who know how to use and maintain sanitation facilities.

Providing a toilet can never be the complete solution. The most important aspect of the equation has to be driving behavioural change. Without a push in the direction of changing user behaviour, sanitation programs have seldom been successful.

Two recurring attributes are smell and a lack of regular water supply. Another major issue is vandalism which led to frequent infrastructural breakdowns. Sometimes, antisocial elements from the community surrounding the school, and sometimes from the school itself, would periodically damage school property.

This would make it very difficult for school authorities to manage funds for repair.

The solution, therefore, has to be capable of taking on problems of irregular water supply and odour, and be low-cost and robust.

The Waterless Urinal uses a simple TT ball to block the path between the urine bowl and the underground sewage system when not in use. The ball lifts up and spins when urinated upon, and settles back into place when not in use. This way, it greatly reduces odour in the toilet without the use of water.

The Waterless Urinal thus reduces the need for water by 70 % and keeps the toilet odour-free.

Reap Benefit has installed more than 200 waterless urinals in the last two years in government schools in and around Bangalore. The sanitation experience of students is now radically better. Since students build the urinals with Reap Benefit’s teams, there is greater sense of ownership, reducing instances of vandalism.

As a result, most urinals are still functioning and running well.

Over the years, the Urinal has gone through several iterations to accommodate user experience and input. The solution, along with an emphasis on behavioural change, is helping create better sanitation experiences in government schools, one urinal at a time.

Join Reap Benefit in its mission to solve tough civic and environmental issues on our website.