Dr. Prakash Amte and his wife Dr. Mandakini Amte have an unusual way of living: they have set up a wild animal asylum in their courtyard. This couple has spent decades changing the lives of the local community in Hemalkasa, Maharashtra, protecting tribespeople and the local fauna alike.

Dr. Prakash Amte and his wife Dr. Mandakini Amte have an unusual way of living: they have set up a wild animal asylum in their courtyard. This couple has spent decades changing the lives of the local community in Hemalkasa, Maharashtra, protecting tribespeople and the local fauna alike.

In the early 70s, Dr. Prakash Amte and his wife Dr. Mandakini Amte were taking a walk in Dandarayana forests of Gadchiroli, Maharashtra, when they came across a group of tribal people returning from a hunt with a dead monkey. Upon taking a closer look, the couple noticed that a baby monkey, still alive, was clinging to her dead parent, attempting to suckle her breast. The sight was heart-breaking.

Dr. Prakash was deeply shocked and questioned the tribe, “What will you do with the dead monkey?” The answer was seemingly obvious; the purpose of hunting was to draw nourishment for the community, not leisure.

“What about the baby monkey?” he pressed.

The incident changed the course of the lives for the Amte family forever.

You may also like: Heartwarming Highlights: 12 Times India Came Together to Help its Animals in 2016

For the Madia-Gond tribal community, hunting was not recreational — they survived on it. At the time of the encounter, Dr. Prakash requested the tribals to give him the baby monkey in return for rice and clothes. They reluctantly agreed.

The red-faced baby monkey arrived at the couple’s home in the village of Hemalkasa and soon became a member of the household.  Dr. Prakash named it Babli after the tribal god worshipped by the Madias.

No one guessed that Babli would be the first of the residents of Animal Ark, a shelter that Dr. Prakash and his family set up in their own courtyard that eventually became home to hundreds of orphaned and injured wild animals. In pic above: Dr. Prakash Amte with the animals of Animal Ark.

Babli soon found a friend in the household dog. She would cling to the dog’s back and fearlessly play with it, unaware that it was the very species of animal the tribals used to hunt her own kind. This scene transformed many hearts. It also helped Dr. Prakash strike a deal with the Madia tribe. He couldn’t question the hunting rights of the tribe as the practice was necessary for them to obtain food, but he decided to at least try and save the baby animals. Dr. Prakash convinced the Madias not to kill minors of the animal kingdom, but to instead bring orphaned and injured animals to his home in return for food and clothes. A deal was struck.

At one point, there were as many as 300 animals in the shelter, living amongst the members of the Amte family and villagers of Hemalkasa. 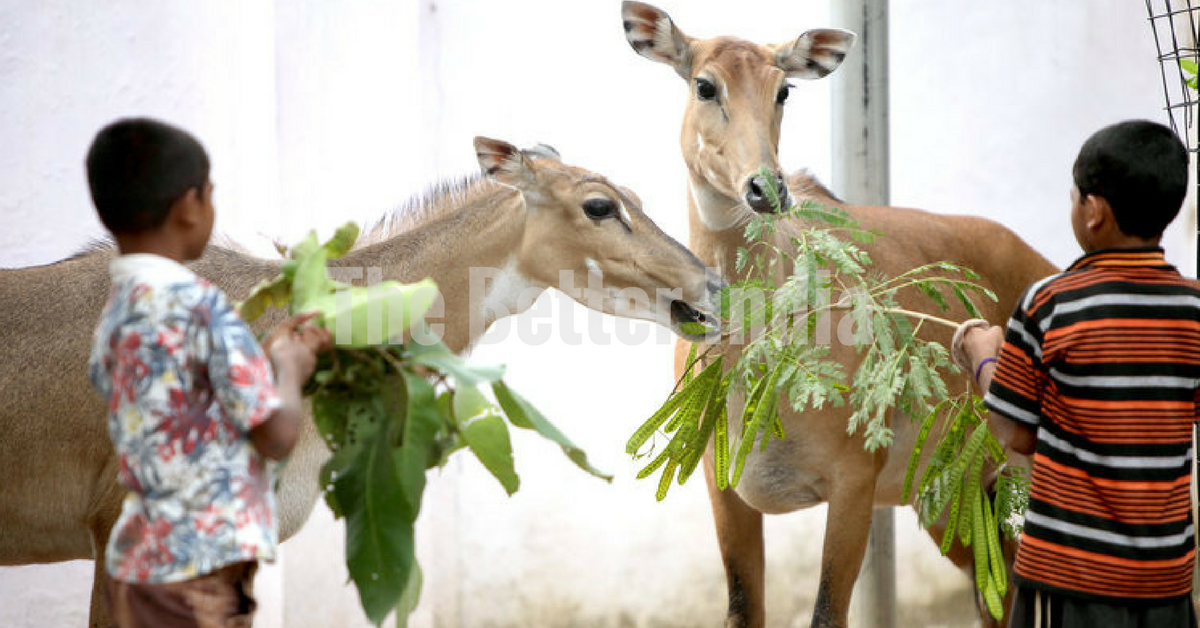 Never before had wild animals lived in such close contact with humans. The issue became a matter of concern for the government. Objections were raised against the breeding of wild animals in village settings. Regulations demanded that the wild animals be caged. Aniket Amte, the doctor couple’s son who had a rather Jungle-book style childhood, describes how he preferred the way things were before the cages were erected.

You may also like: This Vet Is Putting Amputee Animals Back on Their Feet with Prosthetic Limbs. Free of Cost!

“I remember how we, the children of the village, and the animals would walk together to the river for a bath. We grew up with no fear of animals”, he recalls. 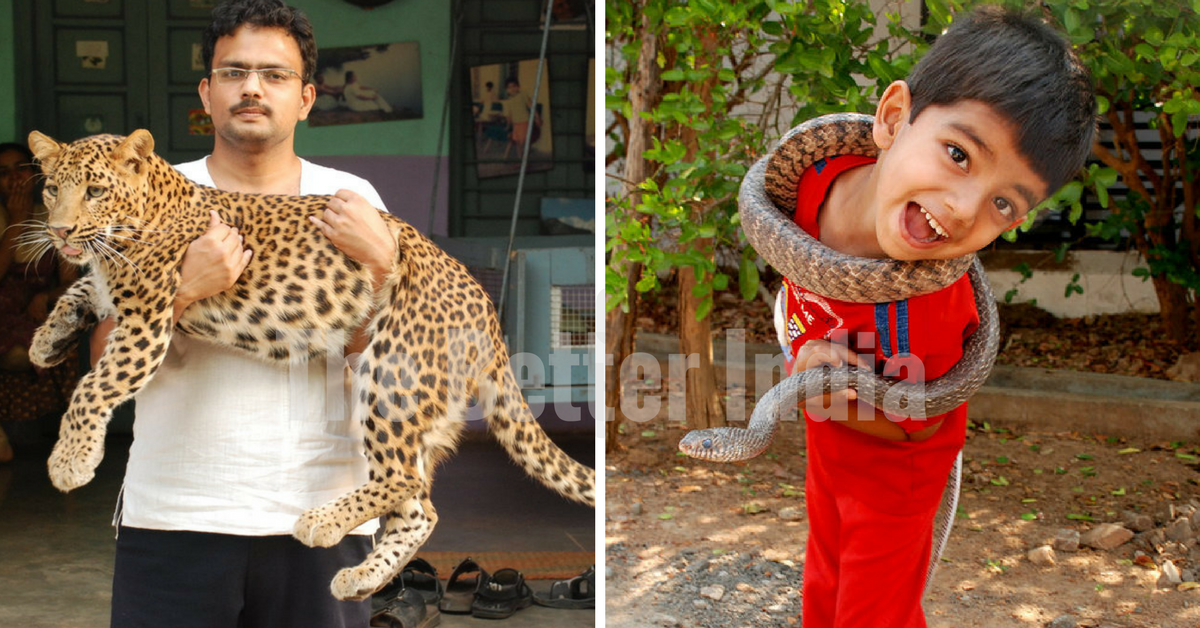 Even with the cages, Animal Ark is more like an ‘asylum for animals’ than a zoo, with the unfettered love that Dr. Prakash and his family shower their adopted family with. Today, there are over 90 animals in the ark. The number of animals regularly brought to the Amte home has drastically reduced because the Madias hunt less.

The reason? Their lives have changed over the last four decades during which Dr. Prakash and Dr. Mandakini made devoted efforts for the betterment of the tribal people of Gadchiroli region. In pic above: Dr. Prakash Amte and Dr. Mandakini Amte – Providing medical services to the tribal people since 1973.

Dr. Prakash also happens to be the son of Baba Amte, one of the greatest social reformers that our country has seen. While his father started Lok Biradari Prakalp and brought change to the lives of many leprosy patients in Anandwan, Dr. Prakash and Dr. Mandakini decided to move to Hemalkasa to continue the tradition of working for social reform.

Hemalkasa, cut off from the rest of the world with no roads or electricity, has long been home to the tribal community of Madia-Gond that lived in abject poverty. The tribes of this area knew no techniques of agriculture and were totally dependent on the forest for their food. They wore no clothes, suffered from malnutrition and had no access to medical care. Dr. Prakash and Dr. Mandakini set up a hospital where they treated tribal people for free. They started teaching the children from the community under a tree. Furthermore, they worked towards solving day-to-day problems of the villagers. The benefits of their work were reaped in the long run. Today the very children who studied under trees have become doctors, teachers, and engineers. The hospital is now equipped with modern facilities. The local school has a proper building and teaches over 400 tribal children. The tribal people have picked up agriculture and consequentially, they hunt less.

Dr. Prakash and Dr. Mandakini are not veterinarians; they are both doctors who went to medical school. The Animal Ark was not a part of the plan they had for their lives but they went beyond conventions to create an animal haven within their own courtyard.

Their three children, Digant, Aniket and Arti, and their spouses, the third generation of Baba Amte, have also devoted their lives to social work. Dr. Prakash and Dr. Mandakini were awarded the Ramon Magsasay Award in 2008 for their work in Gadchiroli. With great simplicity and saint-like devotion, they continue their work in this remote village.

You may also like: This Elderly Couple in Chennai Is Saving Street Animals with Medical Care and More

You should perhaps make a mental note to visit the Animal Ark sometime. You can write to aniketamte@gmail.com