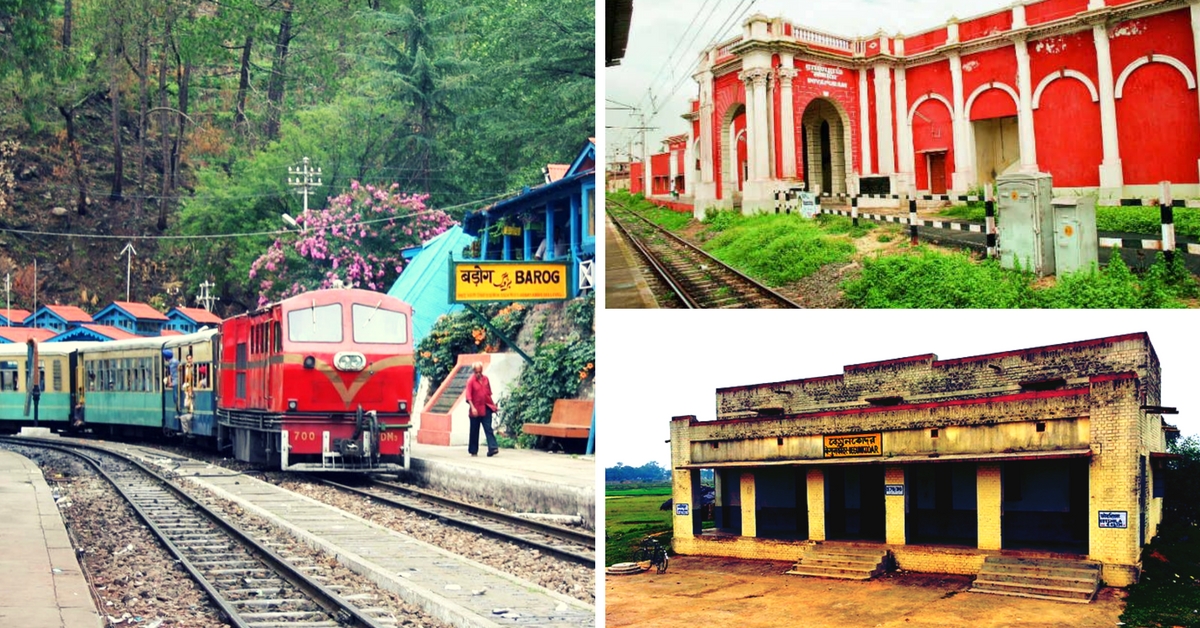 Railway stations are fascinating places. It might be because they have withstood everything from wars to urban development. It might be because of their historic buildings that inspire writers to weave stories around them. It might also be due to the train journey itself, an exciting adventure to foreign lands or a return to familiar settings.

Whatever it is, railway stations aren’t just transportation hubs; they are places that take you into another world before your train even leaves the platform.

In India, visiting railway stations can often be a throwback to another era –the nostalgia, the architecture and the interesting history.

Here are 8 Indian railway stations with stories that will leave you fascinated.

A UNESCO World Heritage Site, the historic Chhatrapati Shivaji Terminus was originally known as the Victoria Terminus when it was built in the 19th century. Its whole design is a combination of Victorian Gothic Revival and traditional Indian architecture shown by three stories of turrets, spires, domes, gables, water-spouting gargoyles and floral and animal patterns. An octagonal ribbed dome atop the structure is its crowning glory.

In the past, Bori Bandar station, located in east Mumbai, was the main station for all commercial and trade activities in the city. It was designed by F. W. Stevens during the colonial era, who named it Victoria Terminus (VT), after the then-reigning Queen Victoria. The complete construction of the building took ten years, which was the longest time taken by any building of that era in Bombay. It was opened to the Queen on her Golden Jubilee in 1887 and was the most expensive building in Bombay, which then cost about 260,000 Sterling Pounds.  In 1966, this 19th-century masterpiece was renamed Chhatrapati Shivaji Terminus in honour of the great Maratha warrior.

The Kachiguda Railway Station may seem lost in the hustle and bustle of the city that has grown around it but that only belies the station’s structural and historical significance. The station was first built in 1916 during the period of Nizam Osman Ali Khan as a part of the Godavari Valley Light Railway to create wider trade connectivity for the state to western cities like Mumbai.

Interestingly, other than its eye-catching architecture and 100-year-old wooden staircases, the Kachiguda railway station also had a distinct ladies’ area with a purdah wall that allowed women to alight and disembark trains in privacy. The railway museum at the station is also a great way for passengers to learn about the history of the Nizam’s State Railway.

An architectural masterpiece, one glance is enough to fall in love with the the gorgeous red-and-white Charbagh Railway Station. Built in 1914 in the City of Nawabs, Lucknow, the station was designed by J,H Hornimen who used both Mughal and Rajasthani elements in its architecture. The magnificent structure is resplendent with domes, minars and cupolas, and overlooks a sprawling garden located outside its front entrance.

While from outside the structure of the station resembles a Rajput palace, from the sky it appears like a chessboard laid out with pieces. A unique quality about the railway station is that while standing on the portico, you cannot not hear the noise coming from incoming and outgoing trains. The station was also the site of the first personal meeting between Mahatma Gandhi and Jawaharlal Nehru in 1916. An engraved stone has been placed outside the railway station to mark this special meeting.

A simple red-and white colonial building with grand Corinthian pillars, the Royapuram station is probably the oldest surviving station in the entire sub-continent, as the original structures of Bombay and Thane stations no longer exist. The Royapuram station was inaugurated on July 1, 1856 by the then Governor of Madras Presidency, Lord Harris. The first services to be operated were between Royapuram and Ambur and between Royapuram and Tiruvallur.

Built by Madras Railway Company, Royapuram was selected as the site as it was on the edge of a settlement of British traders and locals near Fort St. George. In 2016, the Madras High Court prohibited the Southern Railway from disturbing the 160-year-old heritage building of Royapuram Railway Station even for any expansion works.

Kolkata’s most iconic symbol, the Howrah Bridge which spans the Hooghly river, leads to another iconic landmark-the Howrah station. The huge, brick-red building is the second oldest station and one of the largest railway complexes in India. On December 1 2016, the Howrah station completed 111 years. It was on this day in 1905, that the station with six platforms began functioning.

Back then, it was the proverbial feather in the cap for British engineers, representing a new era in the colonial dream of expansion. Today, the terminus is the lifeline for the entire eastern India, with 23 platforms that are used by over one million people every day. A mix of Romanesque and traditional Bengali styles (designed by British engineer Halsey Ricardo), the station built on the banks of the Hoogly river is very much in sync with its surroundings. The station’s most familiar fixture is its ‘boro ghari‘ (big clock), a twin faced clock standing back-to-back that was mounted on heavy wooden frames in 1926.

Rashidpura Khori is small rural junction on the Sikar-Laxmangarh narrow gauge of North Western Railway is one of it’s kind. This one-of-a kind railway station is run and operated by the villagers. The station was declared closed by Jaipur division of the North-Western Railway zone of Indian railways in 2005, citing the reason of poor income. As this would have affected nearly 20000 people of Rashidpura Khori and several nearby villages, the villagers wrote to the railways officials but to no avail.

In 2009, the railways agreed to open the station again on one condition – the sale of tickets worth 3 lakhs. Villagers came together to crowdfund the revival of the station. Since becoming operational once again in 2009, the station is being run by villagers who take care of the cleanliness and maintenance of the station. The person who has been given the job of selling tickets is given 15% of the sales as salary. Other persons have been appointed to check if someone is travelling without tickets

Famous as the haunted station of Purulia, the Begunkodor railway station was abandoned for 42 years because of fears that it was haunted. Begunkodor village is 43km (26 miles) from the district headquarters in Purulia, the westernmost district of West Bengal.

The story goes that in 1967, a railway worker is said to have died days after he saw a “woman ghost” draped in a white sari. Spooked by the rumour, all the employees of the railway station abandoned their posts and refused to be posted to the station. Finally, in 2009, Mamata Bannerjee, the then-railway minister decided to reopen it for the people of the village.

Barog, a quaint little railway station on the Kalka-Shimla train track has a colourful history. Built in 1903, the building of Barog station has Scottish-style gabled roofs and is surrounded by stunning mountain views. According to local folklore, the British railway engineer who developed this tunnel in the Kalka-Shimla railway is said to haunt the very place he helped build.

In 1898, Colonel Barog started boring into the Shimla hill from both sides, hoping they would meet in the middle. The British authorities fined Barog Re 1 for wasting government money when a miscalculation resulted in both the ends not meeting each other. Humiliated, the dejected colonel shot himself inside the incomplete tunnel and was buried near it. Not surprisingly, tales of ghosts have haunted the station ever since. A new tunnel was later completed by British engineer H.S. Harrington with the help of a local holy man called Baba Bhalku. Today, the pretty station is a popular stop on this UNESCO heritage route.

In the last few years, one Mumbai-based NGO has been working tirelessly to restore greenery at railway stations, NGO Harit Sparsh has started a WhatsApp forum that connects like-minded people from Navi Mumbai, Thane and Mumbai who plant and maintain trees around railway station. The first model initiative has been taken at the historic Thane station and will be later extended to Navi Mumbai stations.

Also Read: Railway Stations Across India Are Getting Amazing Makeovers. Here Are 10 Most Spectacular Ones.