#Dangal: Wondering If All Events Shown in the Movie Actually Happened? Here’s the Truth!

While the core of the Dangal's story holds true to the real life events of Mahavir Singh Phogat and his family, five real-life facts were changed for cinematic effect. Read on to find out what they were. (Note: You are entering into spoiler territory!)

Director Nitesh Tiwari’s latest movie, Dangal, tells the remarkable story of an ageing wrestler, Mahavir Singh Phogat, who fought against all odds to mould his daughters into wrestling champions. A man of tremendous fortitude and conviction, Mahavir Singh Phogat’s first big success was when his eldest daughter Geeta Kumari Phogat won gold at the 2010 Commonwealth Games in Delhi.

Her success set the ball rolling for her sisters Babita, Ritu and Sangeeta and cousins, Vinesh and Priyanka, to take up the sport and play it at an international level. Vinesh went on to win another gold medal at the Commonwealth Games 2014. The fact that the girls were from Haryana, a state infamous for female foeticide, made their feat even more remarkable. However, while the core of the movie’s story holds true to the real life events of Mahavir Singh Phogat, director Nitesh Tiwari allowed himself a few cinematic liberties. Here are a few facts shown in Dangal that differ from what happened in the real life of the Phogats.

(Note: You are now entering spoiler territory. So if you are planning to watch Dangal in the coming days and do not want us to spoil the movie for you, stop reading this!)

1. Was Mahavir Singh Phogat really disappointed at getting daughters?

In the movie, Mahavir Singh Phogat desperately wants a boy child so that he can win a gold medal for the country. He and his wife try four times to give birth to a boy, but instead give birth to four girls. However, in reality, it was the girls’ mother who was quite disappointed as she was the one who wished for a boy.

“One can perhaps imagine the state of Mahavir’s mind as the father of a daughter in the late 80s, when girls were considered a liability. But, ironically, it was not Mahavir but his wife, Daya Kaur, who was hoping that their first child would be a boy. When the baby was born, the chill of the winter morning stung a little more fiercely as Daya realised that their firstborn was a girl. Her disappointment showed clearly on her face.”

2. Was there really a villainous coach as portrayed in the film?

Like Bollywood movies on sports, Dangal creates a villain in the coach Pramod Kadam at the National Sports Academy (played by Girish Kulkarni), who demands that Geeta disavow her previous training. In reality, this character is fictional and there is no such villainous coach in the life of Geeta Phogat or any of her sisters.

3. Did Geeta not Win a Single Tournament Before the Commonwealth Games?

In the movie, Geeta Phogat doesn’t win a single tournament before the Commonwealth Games in 2010. She also receives a lot of flak from the coach in the movie for not excelling on the international stage.

4. Was Geeta’s real Commonwealth Games Gold Medal Match the Cliffhanger that is shown in the film?

In the movie, Geeta Phogat struggles to win the gold medal match in the Commonwealth Games in 2010. She scores a five-pointer in the nail-biting final round of the match and clinches the gold medal with a scoreline of 5-1, 4-6, 6-5.

However, in reality, Geeta Phogat completely dominated her opponent and won the match in just two rounds, unlike the one shown in the movie that went on to three rounds. Her score was 1-0, 7-0. Also, Geeta Phogat has long hair in the real match, while her reel counterpart in the movie has a really short hairstyle. 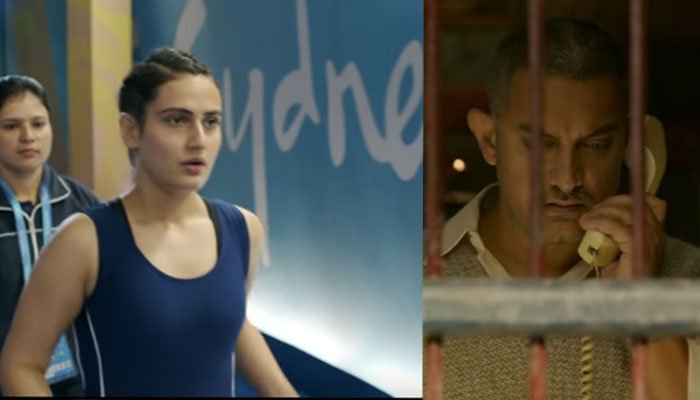 In the movie, Mahavir Phogat is taken to a room and locked up by a person sent by the Indian wrestling team coach just before the gold medal match. As a result, he misses the entire final.

In reality, Mahavir Singh Phogat was in the stands during Geeta’s match and saw his daughter win the Commonwealth Games gold medal.

“As Mahavir stood amid the cheering crowd that day, his gaze locked in on his daughter with pride, the cold winter morning of 1988 flashed before his eyes. That was the day when he had held her in his arms and emphatically proclaimed one day she will make her family proud,” Saurabh Duggal describes in his book, ‘Akhada‘.