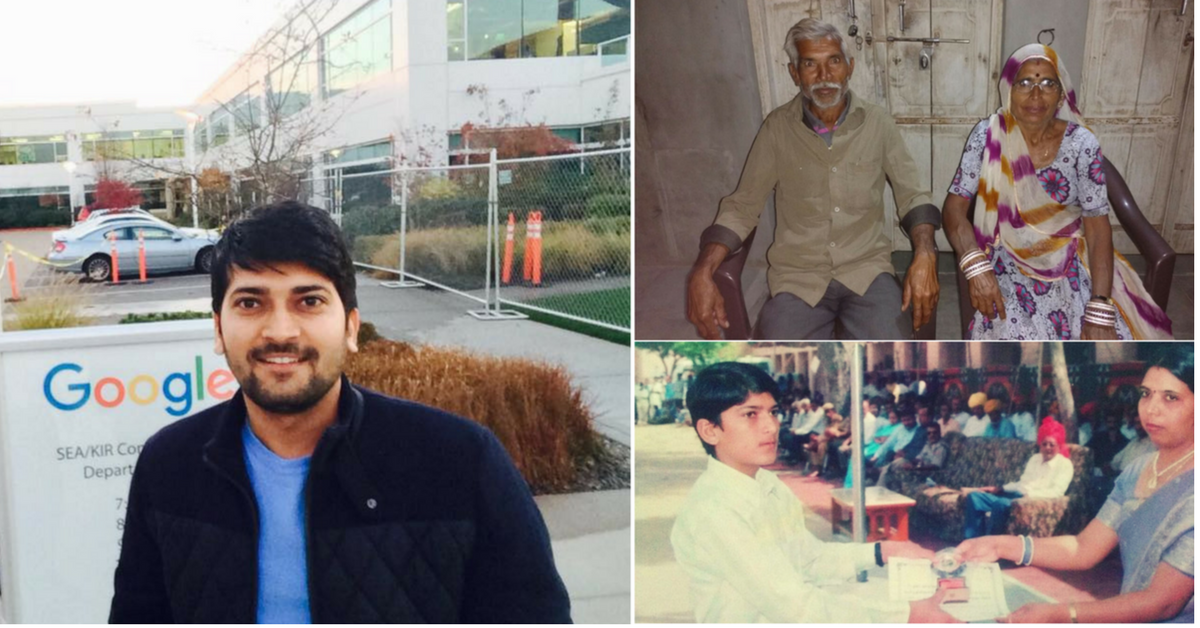 Teja Ram Sankhla and his wife Rami Devi used to sell vegetables in a small town called Sojat in Pali district of Rajasthan. They used to live in a joint family in their ancestral house along with their three children. Soon they felt that they needed to earn more to support the family and hence Teja Ram started working in a henna-making factory, where he would load and unload cartons full of henna products. His wife too took up a job at a construction site. One of their primary goals in life was to build a house of their own. Hence they borrowed funds from a moneylender and bought a parcel of land.

Now, they would work during the day and then spend the nights building their dream home brick by brick.

Ram Chandra was the eldest of their three children and at an age when he was able to understand the hardships that his parents were going through.

“My parents would come home late in the evening. Being the eldest at home, I cooked for the family in our open kitchen,” recalls Ram.

The so-called kitchen was nothing but a mud stove outside there two room house. Ram was a bright child but his parents could afford to send him only to the local Hindi medium government school.

However, when he scored above 90% in his Class X examination, the family could see a ray of hope.

“When Ram scored a merit position in class 10, I knew he was going to do something good with his life,” says Rami Devi.

Ram also received a letter of scholarship from the Rajasthan state government but never got the money.

“We received the letter late. My father and I went several times to Jodhpur to withdraw the scholarship amount but the officials kept asking us to visit again and again. We spent almost Rs 2,000 to commute to Jodhpur and yet never got the money,” Ram recalls.

He then moved to Pali, which was 40 km from his town Sojat, to continue his studies. Every day his parents used to send his lunch in a bus, which Ram would collect at Pali. Although Ram could not fare very well in his Class XII exams, he got a good exposure staying at Pali and knew what he was going to do further. He now decided to prepare for the IIT entrance test by enrolling for coaching at Kota.

Ram’s family too fully supported his decision in spite of the fact that they had to take a loan to pay the fees.

This struggle proved worth it when Ram secured admission at IIT Roorkee.

“I took him to the farms once to work with me, but he said he has to study and never came back to the farms. That’s when I decided to let him study as much he wants,” says Teja Ram Sankhla.

But now the question was about how they would arrange for the expenses of the counseling and the fees.

“All I can say is that it was all a miracle. There was a childhood friend I used to play with. I had never been to his place or met his parents. But on hearing the news of me getting into IIT, his parents came to our place and gave us a cheque of a certain amount which was enough to pay the fees of the counseling and the first semester,” Ram informs.

The family also helped him buy new clothes and a suitcase to begin this new inning of his life.

“I will never forget their kindness. When I went back to repay their loan they did not accept the money; instead they asked me to help another child,” he says.

When Ram returned home for his first Diwali vacation after joining the IIT, there was another surprise waiting for him. One of his neighbors insisted that he accompany him to their community gathering.

“I saw unknown faces at this gathering and yet strangely enough, they had collected Rs 30,000 for me to buy a laptop,”

“I was a computer science engineering student. A laptop was necessary to complete all our assignments but I could not afford one. This was a pleasant surprise. I am so thankful that I came across such wonderful people in my life,” adds Ram.

Meanwhile, the start of the second semester brought with it some worries. The fees had to be paid and he tried to get an education loan from a bank in Sojat, but to no avail. His father therefore had to take another personal loan to keep Ram’s education going.

“My father never begged of anyone. Whenever he needed money, he took a loan and paid it with interest. Unfortunately, our system is such that it discourages financially weak students to get ahead in life. Getting an education loan was a nightmare,” says Ram.

In 2013, Ram completed his BTech degree in Computer Science from IIT and got a job as a software engineer in Google India’s Bengaluru office.

He moved to Google’s Seattle office in USA in April this year. Incidentally, his father continues to work as a loader in the henna factory by choice and his mother looks after their home.

“I am really proud of my son. He keeps telling me to relax at home but I like to work. It keeps me healthy,” says Teja Ram Sankhla, the proud father of Ram.