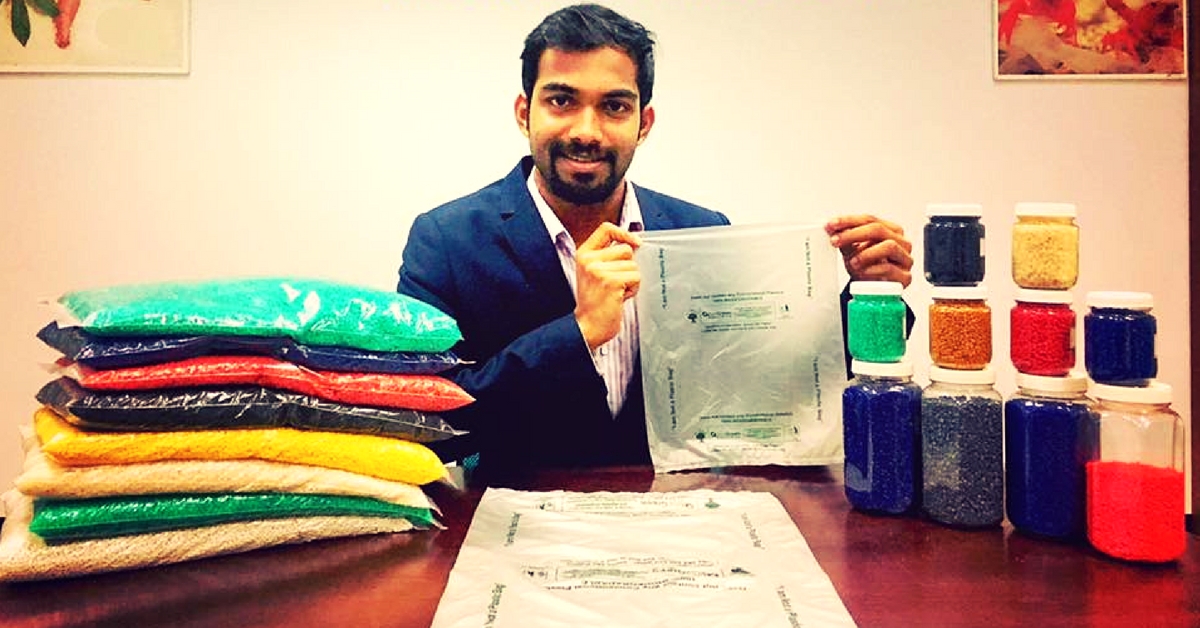 Editor’s Note: This article was originally published on January 2, 2018. However, a year later we received a notification from the Central Pollution Control Board indicating that the compostable bags being sold by BioGreen have not been certified as compostable by the Board. The notification can be read here.

Therefore, The Better India is retracting this article with a sincere apology to all of our readers for the error.

The original article can be found below:

The partial or total ban on plastic bags in several Indian cities is often lauded as a welcome move by most people. As it should be! But if you ask those who cannot afford alternatives like cloth bags (or forget to bring them to the market) – using just hands to carry eggs and vegetables home can be a juggling act. It was this problem faced by ordinary citizens that disturbed Ashwath Hegde, a Mangalore-born but now Qatar-based NRI entrepreneur.

“The Mangalore City Corporation implemented a ban on the manufacture, sale, and distribution of plastic bags in the year 2012. But the decision was taken without preparations for alternatives. People were concerned about how they would carry products from the market now. Everyone cannot afford a bag worth Rs. 5 or Rs. 15 to carry a kilogram of sugar. I decided to come up with alternatives after hearing about these problems in my hometown,” says the 25-year-old.

After researching the problem for about four years, Ashwath founded EnviGreen – a company that produces 100% organic, biodegradable, and eco-friendly bags.

They look like plastic bags but are made of materials like natural starch and vegetable oil derivatives. If placed in a glass of water at normal temperature, an EnviGreen bag dissolves in a day. And when placed in a glass of boiling water, it dissolved in just 15 seconds! These bags take less than 180 days to biodegrade naturally once discarded. So users can throw them away without worrying about harming the environment. The bags are even edible and will cause no harm to animals if ingested.

Ashwath, who has patented EnviGreen, claims the manufacturing process for these bags is entirely different from that of plastic, cloth, or paper bags. The company uses 12 ingredients, including potato, tapioca, corn, natural starch, vegetable oil, banana, and flower oil.

All raw materials are first converted into liquid form and then taken through a six-step procedure before the end product is ready.

“We don’t use any chemicals at all. Even the paint used for printing on the bags is natural and organic,” says Ashwath. He adds that the cost of one EnviGreen bag is about 35% more than that of a plastic bag, but 500% less than that of a cloth bag. “To give you a rough idea, an EnviGreen bag measuring 13 inches by 16 inches costs Rs. 3, while a plastic bag with the same dimensions will cost Rs. 2”.

The Karnataka State Pollution Control Board (KSPCB), which has approved the use of these bags, conducted several tests to ensure there were no plastic elements in them. The tests included placing a hot iron on a small piece of EnviGreen sheet. The sheet neither melts nor sticks to the hot iron surface. The bags also don’t melt, drip, or release any toxic fumes when burnt, unlike conventional plastic bags. They have been tested by the Central Institute of Plastic Engineering and Sriram Institute for Industrial Research as well.

To prove his point, Ashwath has even consumed a bag after boiling it in water to show that it is edible.

With his team of 60 people, Ashwath has now set up a factory in Bangalore that produces 1,000 metric tonnes of bags every month. “We had this unique idea of empowering farmers in rural Karnataka by sourcing all our raw materials from them. We are also planning to distribute seeds to help them produce the amount of materials required to make the bags,” he says.

Currently, the company has not started sales in India, but the bags are already available in Qatar and Abu Dhabi.

“Just the city of Bangalore consumes over 30,000 metric tonnes of plastic bags every month. So we want to set up enough manufacturing facilities before we start distributing to individual customers and local kirana shop owners. We have started supplying to corporate retail chains like Metro and Reliance, which will start using the bags from December this year,” says Ashwath.

According to the Minister of State for Environment, Forest and Climate Change, 15,000 tonnes of plastic waste is generated in India every day, out of which 9,000 tonnes is collected and processed, while 6,000 tonnes is not collected.

Once available for use, EnviGreen bags will not just help ease this problem but also help many consumers struggling to find a balance between their concern for the environment and ways of making things more comfortable in their daily lives.

Find out more about the bags here. You can contact the team by writing to them at ceo@gogreenqatar.com