TBI Blogs: Pramod Sadashiv Chandake Is on a Crusade to Free Belgaum From Social Malpractices

It does look like our country is growing fast, but unfortunately, there is a darker side of the coin. Belgaum, a small district in Karnataka, is still prey to social issues like child marriage, dowry system, prostitution, and human trafficking. What is more unfortunate is that the people of the areas where such crimes persist accept them as a part of their life, rather than oppose and stop them from happening.

However, a few good saplings manage to grow even in this broken land. We had the privilege of crossing roads with a social reformer from Belgaum who has shown courage to question and change the conventionally accepted malpractices of his society. Pramod Sadashiv Chandake is a ray of hope who is fighting hard to reach out to people and be accepted. Speaking to him was like speaking to the new-age father of social renaissance, Raja Ram Mohan Roy, we remember from history books.

Realisation Leading To The First Step For Change Pramod says that the majority of Belgaum is way behind the times. People in his district still believe that child marriage, the Devadasi system (where women are left in temples as God’s servants but are used by the wealthy), dowry, and prostitution are all a normal part of society. However, the biggest of all the issues would be the mindset of the people, who tend to accept all this as an inevitable part of life.

“I could see that a part of the society was not happy with what was happening, though they couldn’t oppose it as they believed it was all traditionally correct,” Chandake remembers. “However, the poorer sections of society and mostly women were always the victims. If people are not happy about something, how can it be right? Hence I thought some change had to be brought about.”

Sowing The Seeds Of Reformation

As it usually is, taking the first step was a big moment for Chandake. “I was a student of social work. I first spoke to my classmates and identified three people who shared my ideas. We then formed a team and approached an NGO in the area,” he says. After gaining legal permission and collecting statistical information, Chandake and his friends set to work preventing malpractices and spreading awareness.

So far, the group has been successful in stopping two child marriages, despite facing a lot of opposition and criticism. They have also rescued three women who were being forced into prostitution. 30 cases of legal issues like domestic violence and dowry which were filed – but not solved – were traced down and pushed forward, and most of them are solved now. In addition, the group has helped 18 kids with HIV with finance, food, shelter, and schooling, and also re-admitted 30 drop-out kids to the school. 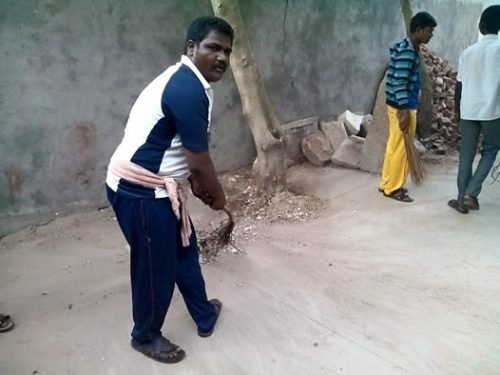 “The Girls On Our Team Make Us Proud”

Despite their achievements, Chandake chooses not to focus on them. “We’ve not done enough so far to make us feel elated,” he clarifies. “However, the girls on my team make me proud. They had to take the initiative when it came to spreading awareness against prostitution, the Devadasi system, and HIV. It is extremely embarrassing and unacceptable for women to be talking about having protected sex and such things in our area, but the girls in my team have done an excellent job with regard to spreading effective awareness. I am proud that we have made a few people cross the unreasonable limitations and become broadminded,” says Chandake, visibly happy.

However, the group feels they have not been accepted by the people so far, and will not be for years to come. “People assume that we’re spoiled or trying to oppose what has been believed since very ancient times. When we try to tell them something is wrong, they outright refuse to listen to us and ask us to walk out.” Chandake is occasionally disappointed that even after having done some work worth notice, people do not accept the fact that his group is working for their betterment. “Their ignorance and unwillingness to change is the biggest problem that we’ve faced.”

Chandake is pursuing Journalism. He feels that “a journalist would be more accepted and respected, because right now we’re just commoners, and people don’t understand why they should listen to us. Though we have legal permission for what we’re doing and we’re also associated with an NGO, people do not want to hear us out.” Chandake hopes to build a self-identity that will get people to listen to him and understand that he is doing things for their good. Pramod Sadashiv Chandake is a soulful person, full of love for his place of birth. Though his people tend to consider him a spoiled brat, all that he feels towards them is pure attachment, and an urge to take them forward. He wants to take them away from the malpractices that hold them back from being the good people that he believes they truly are. Pramod’s eyes are full of dreams for reforming the place he is so fond of, and we wish him the very best in his future endeavours.