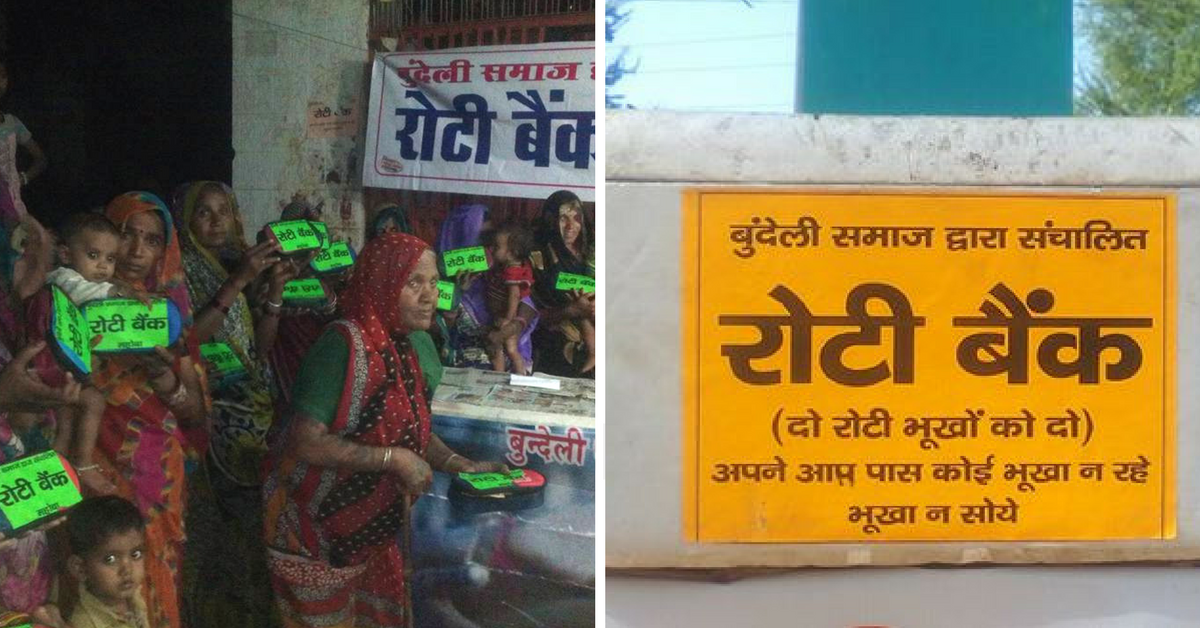 You may never have heard of Mahoba, a small town in the Bundelkhand region in Uttar Pradesh. But the residents of this small town are doing something truly heartwarming and commendable. They make food in their homes to feed the town’s hungry and homeless. An extra portion of simple roti and sabzi is made in the kitchens of over 500 households, collected by volunteers, and distributed by shops in the town.

The initiative was named Roti Bank by Tara Patkar and the small team of 10 who helped him get it off the ground; today they feed at least 1000 people every single day.

“All ideologies and philosophies are of no use if there is someone near you who goes to sleep on a hungry stomach,” says Tara, who used to work as a journalist with Indian Express in Lucknow. “I became a journalist so I could contribute to society. But I felt I needed to do more work on the ground. So I left my career to devote all my time to social service,” he adds.

Tara returned to Mahoba, his home town, and together, with like-minded friends, started Roti Bank in April 2015. The team would go from door-to-door, explaining the idea behind making a little extra food for the hungry. To their pleasant surprise, over 40 households readily agreed to contribute. Next, the team approached shopkeepers in the town centre to find out if they would be willing to place distribution boxes in their shops. Even here, the team got an overwhelmingly positive response.

Roti Bank’s model is simple – households make and pack rotis and sabzi. The households decide how much they wish to give. Volunteers pick up the food in thermocol boxes from people’s homes and deliver them at various designated Roti Bank locations, which are mostly shops. Volunteers and shopkeepers distribute the food to the needy. People can have as much food as they want, for free.

Since Mahoba is a small town, news of what some households were doing spread fast. Many more people wanted to join in.

Within the next three months, the number of households providing food for the hungry rose from the initial 40 to 400!

Another heartfelt gesture came from the children of St. Joseph’s School in Mahoba. The school requested parents to send some extra food along with the lunch boxes they packed for their children. Now, the schoolchildren contribute to the Roti Bank too!

The biggest beneficiaries of the Roti Bank are old men and women, and beggars. Some villagers from around Mahoba also come to the town just to get food. Thankfully, there’s food for everyone.

“At one point there was surplus food – so much so that we had to discontinue taking food from some houses. We then regulated the process to make sure there was minimal wastage. The extra food was fed to cows and buffaloes,” says Tara Patkar.

Mahoba is ill-famed as a backward region of Bundelkhand, with its humble people still struggling for electricity, water and healthcare. But, through the Roti Bank, they have banded together to solve a huge humanitarian issue, upholding people’s right to food.

Inspired by the example of Mahoba, many other towns, and even cities such as Indore and Bhopal, have started their own Roti Banks. Within a year and a half, over 100 Roti Banks have mushroomed all over Madhya Pradesh and Uttar Pradesh. And admirably, all this has happened without a single rupee being given or taken! The Roti Bank refuses to take any donation for its work. Tara has even refused the awards people wanted to give him for his selfless service. He says his reward is people starting Roti Banks in their own towns.

Your city or town could be next! Tara Patkar and his team are more than willing to share their experience with anyone who wants to start a Roti Bank.

You can write to him at tarapatkar@gmail.com