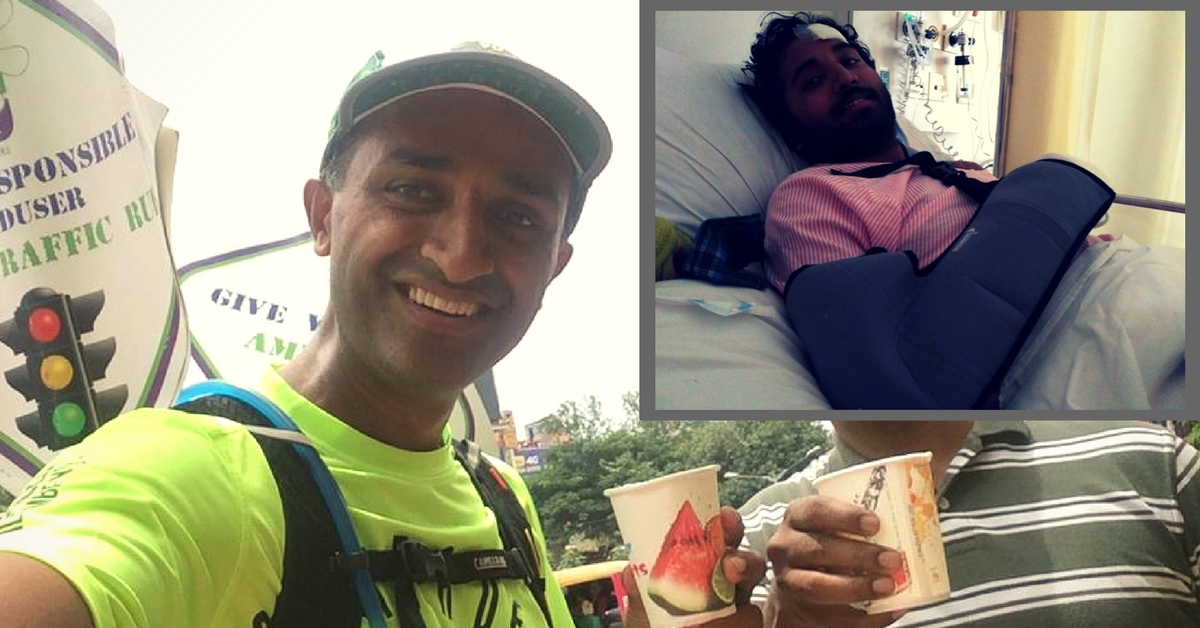 The day started with a usual sense of excitement and vigour for the avid runner Kannan Sundararajan as he was participating in the Bengaluru Marathon on October 16. However, the day had something far more complicated in store for him.

In that one day, Kannan didn’t only finish the marathon, but he also saved the life of an accident victim. Not stopping there, he further helped the injured youth raise money for his treatment.

Kannan has recounted his experience in a Facebook post. When he reached the 20 km mark near the Domlur flyover, a fellow runner told him about an accident on the other side of the flyover. Since Kannan is certified in first-aid/CPR, and is an advocate for road safety, he rushed to the accident spot to help.

“After reaching the crowd what I saw was shocking. There was a young man sitting in the median crying out in pain. There was a pool of blood next to his right leg on the median. He was seriously injured,” writes Kannan.

The 22-year-old Kiran Yadav L had been knocked down from his bike, and a truck had run over his leg, smashing it completely. While some race volunteers and bystanders had already called for an ambulance, Kannan found that the first aid had not been taken care of properly. He soon took charge of the situation and tried to minimise the blood flow by keeping Kiran’s leg elevated.

“There was blood everywhere and the scene was horrific. He had some head injury (later found that his helmet had protected him – but unfortunately the visor had pierced through his forehead). He also had multiple injuries on his right-hand fingers. Looking at this man’s condition, I only prayed to the God to give him the best courage to go through this gruelling experience,” writes Kannan.

When the ambulance finally arrived, it was no relief to Kiran since there was no paramedic or any other trained personnel to attend to an emergency situation like this. It was simply a vehicle with a driver. Kiran had to be rushed to the hospital in the same condition and Kannan tried his best to support his broken leg through the ride. Once Kiran was admitted and his parents had arrived at the hospital, Kannan left to finish his marathon, but only with a sense of purpose in his mind.

Kannan, who is an advocate for road safety, is on a mission to raise awareness by promoting road safety and first aid and CPR training. To do the same, he has started a campaign to run 42 marathons in 42 weekends in the year when he turns 42.

The unsettling feeling that the traffic had been diverted because of the marathon, which easily could have been a cause for Kiran’s accident, filled Kannan with a sense of responsibility. He discussed the situation with the marathon organisers, as well as fellow runners. Without waiting for anyone else’s help, he decided to take upon himself the task of raising the money for Kiran’s treatment.

He decided to set up a crowd funding campaign on Ketto and reach out to all his contacts. The campaign received an overwhelming response and Kannan managed to raise around Rs 3,92,000 through his Ketto campaign within a week. Also, the race director of the Bengaluru Marathon donated Rs 1 lakh towards Kiran’s medical expenses. Along with other cash donations, Kannan has been able to raise the targeted amount of Rs 5,00,000.

Thanks to the sincere efforts of Kannan, Kiran received the required medical help and is recovering well. His family is grateful to Kannan as well as the campaign donors, who are helping their son get through this very difficult experience.

This video, where Kiran’s father thanks all those who helped him, can certainly restore one’s faith in humanity.