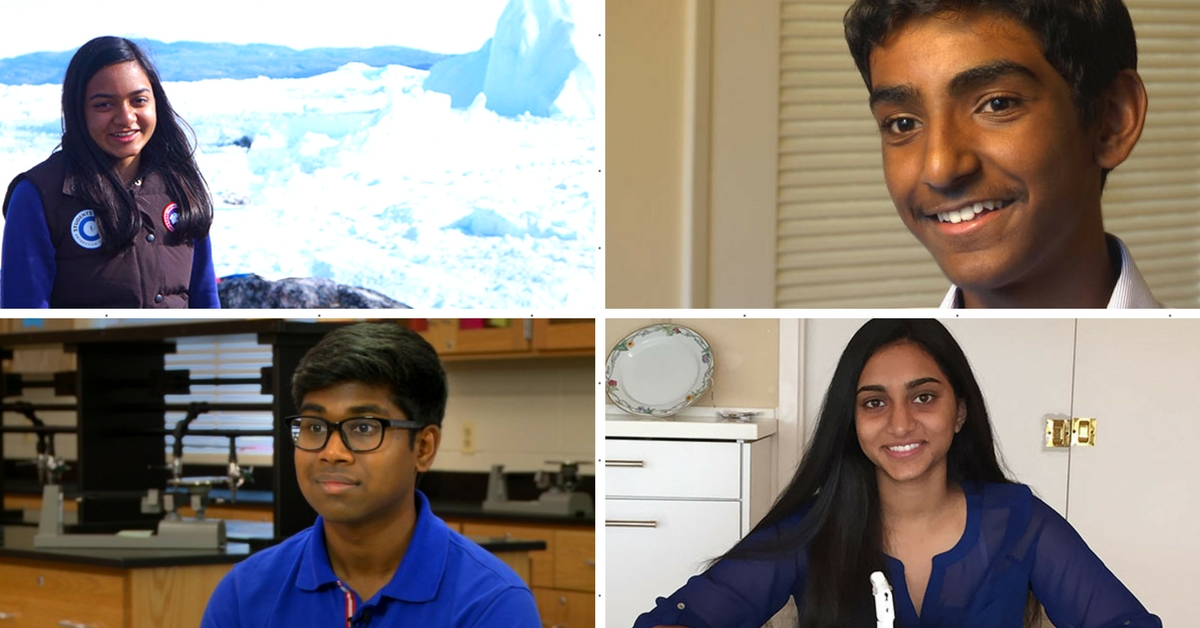 “Nothing is more inspiring than stories about heroic people who have truly made a difference to the world.” – T. A. Barron

The Gloria Barron Prize for Young Heroes, established by author T.A. Barron in 2001, celebrates inspiring youngsters from diverse backgrounds all across North America. Each year, the Barron Prize honors 25 outstanding young leaders – 15 winners and 10 honorees – between the ages of 8 and 18 who have made a significant positive impact on people, their communities and the environment.

In 2016, five Indian-origin teens – Anurudh Ganesan, Raghav Ganesh, Meghana Reddy, Pooja Nagpal and Maya Burhanpurkar – were announced as winners of the 2016 Gloria Barron Prize for Young Heroes. Accounting for a third of the 15 young leaders named, these inspiring teenagers have made India proud by their leadership, courage and innovative work.

Here are the stories of these five young leaders who are not only bringing about change but are also inspiring youngsters around the world to take action.

A resident of Clarksburg, Maryland, 16-year-old Anurudh is the inventor of VAXXWAGON,  a wheel-powered portable refrigeration system that enables doctors to transport vaccines safely and effectively. Requiring no ice or electricity, the system can be hitched to a bike or simply pulled by a person or animal for the critical last leg of a vaccine’s journey to remote locations. This important feature keeps in mind the lack of water and electricity supply in most remote locations around the world. With a patent pending for his design, Anurudh plans to refine and scale up the device so it can effectively reach those who need it.

When he was six months old, Anurudh Ganesan’s grandparents carried him for 16 kms across remote rural terrain (in India) to receive a vaccine, only to find that it had overheated and was no longer viable. So, while Anurudh was able to receive the vaccine the next day, as a teenager he realized that there were many who weren’t as lucky. He decided to change this and spent months in designing a device that would improve the last-mile connectivity of vaccines.

“I’m committed to seeing this project through to the next phase. I will have succeeded when the first person’s life is saved because of VAXXWAGON.”

A resident of San Jose, California, 14-year-old Raghav Ganesh invented a 21st century version of the white cane that enables blind people using canes to detect upcoming obstacles in their path. Called SmartWalk, the cane has a clip-on electronic attachment that uses ultrasonic and infrared technology to detect upcoming obstacles and alert the user via vibrations. The cane, which comes hosed in a tiny box, can warn the user of knee-high objects as far as 10 feet ahead. The intensity of the vibration indicates the distance of the obstacle and the vibrations stop once the path is clear.

Raghav initially worked for a few months with Santa Clara Valley Blind Centre to test his invention. On successful completion, the invention helped the teenager bag the first place in the state science fair, as well as numerous accolades from other competitions. Raghav used the money from a small grant by Youth Service America to make multiples copies of the device and donated them to the blind center he had worked with. He also published the design of his invention, allowing organizations around the world to freely produce and distribute the device to those in need. A budding scientist, Raghav has also invented a wearable device that can predict and prevent autistic outbursts. He also hopes to improve his cane’s current design to make it more compact and efficient.

“These experiences have taught me what it takes to translate technology from a concept to the real world where it can benefit and help people.”

You May Like: This 15-Year-Old Indian American Is an Entrepreneur. And She Just Got Awarded by the White House

A resident of San Diego, California, 17-year-old Meghana Reddy is the founder of Limbs with Love, a non-profit organization that creates and provides 3D-printed prosthetic hands free-of-charge to children in need all over the world. Fab Lab San Diego, a local computer workshop, helps Meghana with her designs that are printed and assembled using plastic and 3D printer technology. These relatively inexpensive prosthetic limbs are then delivered locally as well as to countries like India, Brazil, Mexico and China.

The idea came to Meghana on a family trip to India. She was volunteering at an orphanage and wanted to help the orphanage’s two young children with missing limbs. Researching for ways in which she could do so, she realised that commercially available prosthetics were very expensive and that 3D printing could provide low-cost alternatives. Working with several students from local high schools, a knowledgeable board of advisors, and her parents (who helped with the fundraising and transportation), Meghana perfected the lengthy process behind the production and delivery of each prosthetic hand. She is currently working on a prosthetic hand prototype that increases finger functionality and sensory perception.

“You are never too young to make a difference.”

A second-degree black belt in Taekwondo, Pooja Nagpal, a resident of Manhattan Beach, California, is the founder of For a Change, Defend, a non-profit dedicated to eliminating gender violence and empowering young women. When she was just 15, Pooja travelled with her sister to the mountain village of Subathu in India to teach martial arts and self-defense to disadvantaged young girls as a part of her Girl Scout Gold Award project.

Since then, Pooja has trained over 800 women and girls in slums and rural villages of India. Partnering with several state governments in India, Pooja has taught and implemented an integrated self-defense curriculum in government schools, institutes for visually impaired girls, orphanages and colleges. Back home in the US, she has partnered with several domestic violence shelters and teen sexual violence prevention campaigns. Recently, she also taught self-defense techniques to victims of sex trafficking in poverty-stricken villages near Delhi and is currently working on a women’s safety app for college students.

“I see an opportunity for change and an obligation to serve as the change-maker.”

Read More About Her Here: Why a US-Based Girl Has Been Teaching Self-Defence to Indian Girls Since She Was 15

A resident of Ontario, Canada, Maya Burhanpurkar is passionate about climate change. The 17-year-old has made a documentary that tells the story of her expedition to the Arctic where she witnessed the devastating impact of climate change firsthand. The film has been produced through STAMx Youth Inc, an NGO the talented teenager founded to encourage like-minded youngsters to take action against climate change.

Maya was just 14 when she joined scientists and other students on the research expedition to the Arctic. Initially intending to shoot a personal video, she decided to make a full fledged documentary when she saw how a warming climate and melting ice were devastating the life of the native Inuits. Returning home, Maya stuck to her plan, even though she knew nothing about film making. It took her nearly two years, but she finally succeeded, even managing to get the renowned Canadian novelist and activist, Margaret Atwood, to be a part of her film. In 2015, Maya’s documentary, 400 PPM, released as a non-profit, open-source documentary film. Since then, the compelling documentary has reached out to an audience of over 2.2 million students.

Incredibly, this is not all. As a 12-year-old, Maya had developed an “intelligent” antibiotic. At 13, she had discovered promising novel cardio-protective properties of two experimental Alzheimer’s drugs. At 14, she had made a major addition to Newton’s standard model of fundamental kinematics and at 15, she became the youngest ever president of STEM, a non-profit science expo that reaches out to over 120,000 youths across Canada!

“There were many late nights when I contemplated giving up on my project and getting a good night’s sleep. I’m so glad I didn’t.”