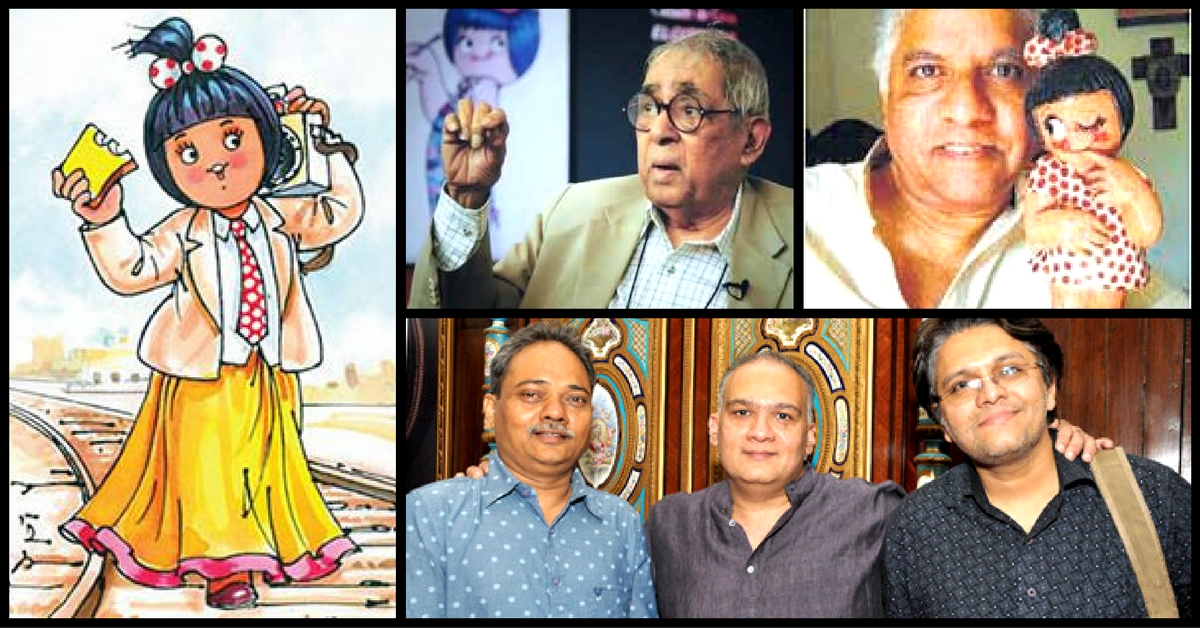 A much-loved icon of modern India, the deliciously witty Amul girl turns 50 this October. Since her inception in 1966, this cheerful blue-haired little moppet in a red polka-dotted dress has wowed the nation with her sometimes tongue-in-cheek, occasionally controversial and always enjoyable one-liners in billboard and print ads. One of India’s longest running ad campaigns, this is also probably the only ad campaign in the country with an unchanged theme and style for almost 50 years now.

Here’s the story behind one of India’s most loved mascots who continues to win hearts with her tongue-in-cheek humour and clever wordplay.

While the brand Amul was registered and started its work in 1957, the advertising campaign started only in 1966. The DaCunha ad agency of Mumbai was given the responsibility of the brand’s ad campaign by Dr Verghese Kurien, head of Amul and the father of India’s White Revolution – the world’s biggest dairy development programme.

Back then, advertising on television and print media was wildly expensive and so Sylvester DaCunha, the founder-chairman of DaCunha Communications, decided to design an Amul ad campaign for the more affordable outdoor hoardings.

The Amul girl was created by Eustace Fernandes, the art director of DaCunha Communications in 1966, the same year the simple yet catchy phrase “Utterly Butterly” was coined by Sylvester’s wife, Nisha DaCunha. Initially, the word ‘butterly‘ met with a lot of skepticism, because it was ungrammatical. However, it worked superbly for the brand and soon became one of the most memorable taglines in Indian advertising!

In 1966, DaCunha and Fernandes designed the mascot’s first public appearance on billboards. The cute image of Amul girl kneeling in prayer, with one eye closed and another on a pack of butter with the words, “Give us this day our daily bread with Amul Butter” got an immediate positive response from the public.

However, DaCunha soon realised that there was only so much one could say about food. He decided to pitch the dairy brand’s ad campaign differently, in a way that would instantly connect with the public. In 1966, he released the Amul girl’s first topical ad. Titled “Thoroughbread”, the ad showed the Amul girl as a jockey holding a slice of bread during the horse race season. The feedback was again very positive.

Next came the monsoon ad, “Pitter-patter, pick-a, pack-a Amul butter”, and an ad about the Kolkata hartals of 1960s ,”Bread without Amul —cholbe na, cholbe na”. A clever play on the slogans of the processions, “Cholbe na!” (or “Will not do!”), the ad drew a smile from Bengalis across the country.

While Amul’s topicals ads were very popular, they also posed a challenge – they needed to be released quickly or else, the would lose much of their impact. Realising that the protocol and logistics of approving and releasing an ad took a lot of time, Verghese Kurien gave DaCunha Communications the freedom to run the campaign without waiting to take permission from the company. This very rare gesture reflected Verghes Kurien’s seasoned business acumen and unique way of going about things. This immense creative freedom is still maintained and is the the reason why the Amul girl is never late with her take on the world.

The permission and trust in the relationship were handed down to Rahul DaCunha when he inherited the Amul campaign from his father in the early 1990s.

Under Rahul, the campaign increasingly commented on contemporay events in sports, politics and films. While most of their satirical messages were welcomed sportingly by popular figures and organizations, occasionally, a few ads managed to ruffle feathers.

The ad agency was served legal notices several times but they never gave in, always standing by their ads. For instance, during a prolonged airline strike, the Amul ad said, “Indian Airlines serves Amul butter – when it flies.’ A furious airline demanded the immediate removal of the ad or threatened to stop serving Amul butter but the company didn’t relent.

Ads involving Jagmohan Dalmiya, Suresh Kalmadi, Satyam Computers and Subrata Roy also resulted in the agency being served legal notices, but in all these cases, the agency and Amul never relented.

Helmed by Rahul DaCunha, copywriter Manish Jhaveri and illustrator Jayant Rane, the Amul girl ads have retained their fearlessness over the years. Under Jhaveri, the ad campaign also developed its unique style of vocabulary, with lots of puns and a colloquial flavour. He also brought in a new mix of regional and formal vocabulary that was loved by the public.

Rane, on the other hand, has been painting the Amul ads painstakingly by hand for thirty years. Referring to scrapbooks compiled by previous teams, the illustrator ensures that he sticks to Amul girl’s trademark features – blue hair, chubby cheeks, wide eyes, no nose and long eyelashes – even while adding celebrity twists.

Having worked together for years, the talented trio have perfected the art of choosing a subject for the Amul girl ad and releasing it at the perfect moment. Most of their campaigns are specifically targeted to the regions they impact the most. While they choose the trending topic from the newspapers, they get the public point of view from social media, which, according to them, has become the weather vane to gauge public perception.

In an age where roping in celebrities for ad campaigns had become the trend, Amul’s ads stand out for their simplicity, freshness and their penchant of focussing on current events to bring home a point. This is why the dairy giant’s campaigns and brand continue to outlive expectations with close to 6000 billboard hoardings being produced across India till date.

Half a century later, the Utterly Butterly Girl continues to peer down billboards, having had her say on everything happening in India for decades. To celebrate the Amul Girl’s golden jubilee anniversary, DaCunha Communications has released a coffee table book that tells the story of an evolving India as seen from the Amul girl’s eyes.

You May Like: Get Ready for a Trip Down Memory Lane with 8 Timeless Vintage Ads from the Good Old Days