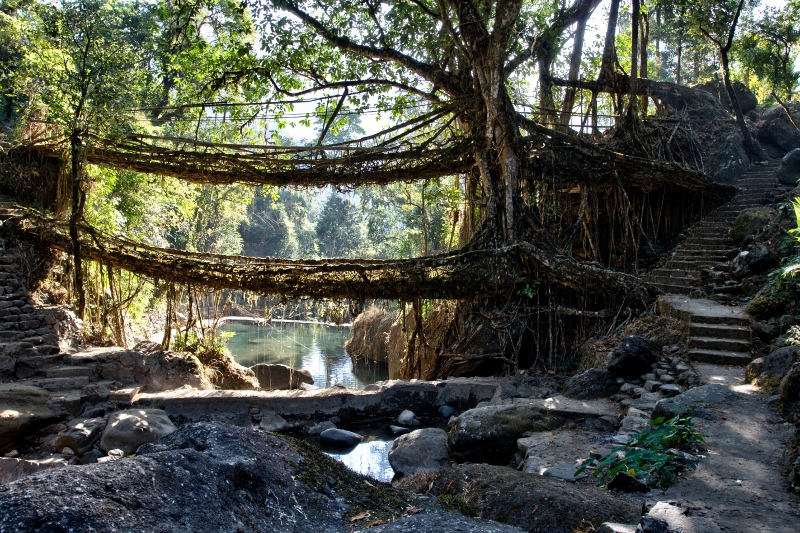 In my fatigue, I paused atop a wire suspension bridge, and there it was – the first sign of the root bridge. Centuries ago, the locals of the area must have spotted a root like this one connecting two boulders over a river, and that must have given them an idea

Compared to the big cities of India, the people here live relatively modest lives. Yet, they seem so full of life and mirth. Even asking for directions was a pleasure as this man chatted with me while puffing on his homemade pipe. The dominant local tribe is the khasi, and the people are simply known as khasis. One disturbing habit of the khasi people is their addiction to chewing paan leaves. Everyone carries a little packet of leaves and some Bangladeshi betel nuts with them. The end result is that virtually everyone has stained teeth, if they have teeth at all.

Finally, I was rewarded for my efforts! At first, I was so tired from the long and arduous trek that I walked right over the bridge to the tiny guesthouse where I spent the night. It was only the next morning when someone told me that the famous “double-decker” root-bridge was right around the corner did I see it for the first time. In the right hand corner of the picture, you can see the stairs that brought me down from Cherra Resort. They terminated in a limpid blue pool that was filled by a small waterfall.

The khasi people are adventurous eaters by most people’s standards. While enjoying chicken, fish, and pork, they also like to roast spiders the size of coconut shells, and hunt and eat frogs and toads. For a vegetarian such as myself, there was rice, and daal, cooked with fresh local vegetables and spices. And Maggi!

Another view of the majestic double-decker living root bridges. The secondary roots of the aptly named Ficus Elastica form the bridges. These roots take hold of any structure and grow across them. The indigenous locals have figured out how to use hollowed betel nut trunks to create a guidance system for the rubber tree’s roots to span across rivers. A new bridge takes about a couple of decades to become usable. Some of the bridges in Nongriat are hundreds of years old, and are extremely strong. One local claimed that it could support the weight of an elephant, though about twenty or so people would be more like it. When it rains and the rivers swell, these bridges are the only way to get across from one side to another, thus forming a vital infrastructure in the khasi hills.