TBI Blogs: Technology Is Helping Disabled Women in India Stand up Against Violence & Demand Their Rights

From domestic violence and health, to their rights and government schemes, the Azadi Ki Udaan app is helping disabled women in the country take their first steps towards an independent existence.

From domestic violence and health, to their rights and government schemes, the Azadi Ki Udaan app is helping disabled women in the country take their first steps towards an independent existence.

From when she was little, Sahida Khatun, now 25, knew that she was not like the other children in her family, or even in her village of Bhandaghar, in Odisha’s Puri district. While everyone would run around, playing games and cavorting in the fields during their free time, Sahida had trouble just keeping up with them. The disability in her right leg held her back, even causing her to be sidelined by her family and the community at large.

Coming from a poor family, even the basics of life always came at a premium, especially considering she was one of four sisters and three brothers, Sahida found that she was constantly forced to find novel ways to convince her parents to spend on her, whether it was for her education, or for her clothes. She was even forced to fight for their affection.

Her situation would have been far easier had someone bothered to find out if there were any specific government welfare initiatives and schemes for the disabled that she could benefit from. Even applying for a disability certificate would have opened many doors for her.

Dejected and rather neglected, she completed Class 10 and then, something amazing happened. The teenager met Sriyarani Dei, a field coordinator of Shanta Memorial Rehabilitation Centre (SMRC), a Bhubaneswar-based NGO that works for the upliftment of disabled persons.

When Dei saw Sahida struggling, she reached out to her and informed her of the various government schemes she could avail to secure health, education and livelihood benefits. That encouraged her to take matters into her own hands. From then on, she decided to ensure that she got her rights. But due to her disability, it was difficult travelling to the block office at Kakatpur to follow up with the officials.

“I had to request my brothers, or one of the villagers, to take me there on the two-wheeler. The villagers would often remark, ‘Look at this chhoti [lame] woman going to the block office to know about government schemes, as if the information will change her world’,” she recalls.

Many made fun of her, but that didn’t stop Sahida. “I was keen to know more about my disability and health condition, as well as the schemes that are there for people like me. I didn’t want to be dependent on anyone,” she says.

If speaking to Dei motivated her to step out and demand her rights, today, her confidence has got an added boost with the introduction of ‘Azaadi Ki Udaan,’ a mobile app and voice messaging service developed jointly by SMRC and Inflexi Technology.

Thanks to the app, disabled persons across the four blocks of Puri district have easy access to everything they need to know about state and national schemes, apart from crucial information on domestic violence and abuse, which countless disabled people encounter on an everyday basis.

As per the Census of 2011, there are 12,44,402 disabled people in Odisha, of which 5,69,627 are women. Disabled women are severely marginalised within society, are denied their rights and subjected to widespread discrimination. Poor literacy and low incomes only exacerbate their circumstances. This deeply entrenched disempowerment has a serious fallout: violence, both physical and emotional, becomes an inherent part of their life.

To gain an in-depth understanding of the particular concerns of this disenfranchised group and to provide them with the support they need to get ahead, SMRC came up the idea of creating Azadi Ki Udaan. The app has answers to Frequently Asked Questions (FAQs) under four major categories: domestic violence, health, rights and government schemes for women with disabilities. These days, in the four states where SMRC is active – Gujarat, Karnataka, Odisha and Telengana – differently-abled women can benefit from this application which has been made available to them in their own language.

Talking about the need for such a service, Reena Mohanty, Programme Manager, SMRC, says,

“During the course of our work, we have observed that disabled women are eager to know about their rights but they are unable to ask anyone because they are suppressed from childhood. We devised this system so that they are able to get expert guidance without being dependent on anyone.”

As a majority of them are either impoverished and illiterate or semi-literate, the organisation has alternately created an interactive voice recording and messaging system, too, where women can call in to get answers. Moreover, it has provided mobile phones to select women to facilitate interaction.

“If they have a query they can dial the toll-free number. After a few seconds, the call will automatically disconnect and they will be called back from the same number. As a first step, the IVR gives three options. While the first two provide relevant information, option three allows them to record a voice message. Once they record their query, they need to press # and the system will announce: ‘your message has been recorded.’ Later, our expert will call them to clear any doubts or concerns. So far, many women have called up to talk about domestic violence and sexual harassment,” Mohanty reveals.

Besides inquiries, women call in to give suggestions and share their experience and problems.

Sahida has successfully used the voice messaging service to link up with the Swachh Bharat Abhiyan, the government’s sanitation intervention.

“Where open defecation robs any ordinary woman of her dignity and makes her vulnerable to violence, just imagine the plight of someone who is disabled. When I heard about the Clean India Mission, I immediately decided to take it up with our panchayat. However, our village had already been declared a ‘Nirmal Gram’ and the block officials were reluctant to release funds,” she says.

Nonetheless, Sahida stuck to her demand and succeeded in getting more disabled friendly public conveniences built. In addition, in order to become economically independent, she sought SMRCs assistance to start her own little grocery shop as well as a modest auto repair business. Spurred by her accomplishments, other disabled girls and women in her village are reaching out to her to know more about SMRC’s IVR system.

Another young woman, Sita Behara, whose right hand is crippled, has been able to continue with her education – she is enrolled in the college at Kakatpur presently – after she sought details on the government benefits girls like her can avail of, from the IVR system.

“Both the app and the voice messaging system are very useful. At every step of the way, there are people who are only too keen to deprive us of our rights. At least, that is not possible anymore. I have taken to helping out others like me, by spreading word about this service,” she elaborates.

These days, Mansi Chand, 22, is using the IVR to understand what she needs to do to file a domestic violence case against her in-laws. 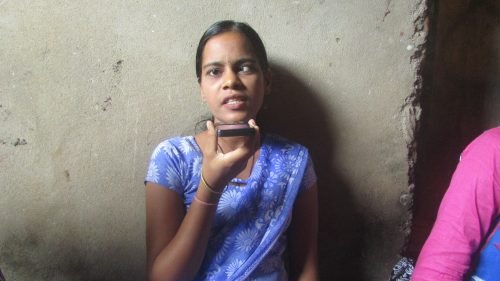 Chand, who is blind in one eye, suffered through immense physical and verbal abuse at her marital home because she did not get enough dowry. The daughter of a power loom worker, she was married in 2012. She has now come back to her natal home, and is happy that her parents and four sisters are backing her. “The torture was unbearable. His parents felt they had not received enough money in marriage because they had accepted a disabled daughter-in-law for their perfect son. When my parents came to know of this they took me away. I am determined to take them to court. Earlier, I didn’t know how to proceed but I am getting the answers I need now,” she says resolutely.

Concludes Dei, “They are vulnerable in every way – financially, socially, physically. I have seen how this service is transforming them, making them more certain of their place within the family and the community.”

If information is power, then more power to these extraordinary women!