TBI Blogs: India’s Underprivileged Elderly Survive on an Average Pension of Rs. 200. Here’s How You Can Help

This International Day of Older Persons (IDOP), here's how you can ensure that vulnerable elderly in India are given their basic right to a life of dignity

This International Day of Older Persons (IDOP), here’s how you can ensure that vulnerable elderly in India are given their basic right to a life of dignity.

If you are reading this article, chances are that you’ve occasionally spent Rs. 200 for the simple pleasure of a piping hot cup of coffee in a metro. Next time you sip your cappuccino, as you sit in an air-conditioned café, spare a thought for the fact, that, in our country, an estimated 1.97 crore elderly still survive on a pension of Rs. 200 for an entire month, an amount which is expected to take care of not just their food, but also their medical expenses in their declining years. Another 7.15 crore elderly never get access to even that meager an amount in the first place!

More surprising still is the fact that only 10% of the total Indian workforce is engaged in the organized sector, which is entitled to contributory pension. For the unorganized sector, social security schemes are ad-hoc, inadequate and ineffective, on the whole.

Thus the older populations, who are/were workers in the unorganized sector, largely have to fend for themselves when they are passed the prime of their working life. Even though India is, in many ways, blessed to have the ‘demographic gift’ of a young population, the larger picture is pitiful indeed, when one takes into account the simple fact that over 70% of India’s elderly are financially dependent on others. The situation is far worse for elderly females. Among them, about 85-87% are economically dependent on others, either partially or fully, for their mere survival.

India’s social security system is inadequate, when compared to those in other third world economies, with the same per capita income. According to a report by The Hindu, some states in India have fairly comprehensive social security schemes — notably Kerala, West Bengal and Tamil Nadu — but the scale of the benefits awarded, is modest. With regard to coverage, implementation procedures, and other factors, many of these schemes are considered to be inadequate on several grounds. 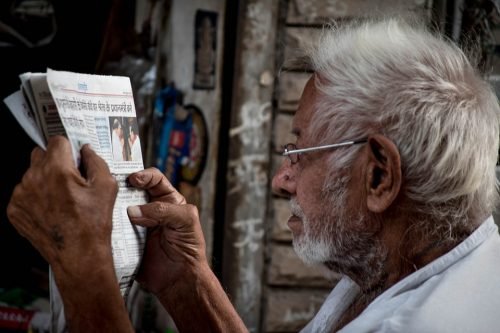 The pensions are awarded under the Indira Gandhi National Old Age Pension Scheme (IGNOAPS), constituted by the Ministry of Rural Development.

Some States do give an additional State Pension varying from Rs.1800 (currently being offered by Goa) to Rs. 50 (currently offered by Assam). States like Bihar and Madhya Pradesh, however, offer no contribution at all.

“My sons have thrown me out of our home. There is no one to pay for my coffin when I die. I need my pension savings to buy me a place after death. Will I be denied that too?” says 86-year-old Rameshwar Singh, highlighting the plight of pensioners in India.

91-year-old Sunaina echoes the sentiment, “Corruption from the middlemen in my village eats my Rs. 200 pension, too. I don’t want to beg. I’ve lived with dignity all my life. I want to die with dignity. Is that too much to ask?”

Rameshwar and Sunaina have simple demands: a government that addresses the grievances of its older citizens, and a pension that will help them live a life of dignity.

HelpAge and other senior citizen bodies have been advocating a Universal Pension of Rs. 2000 per month as the first step towards building a social security network for vulnerable Indian elderly. With the elderly likely to constitute a quarter of India’s population by 2050, there is a need for a publicly-funded, universal scheme that will overcome destitution among the aged.

So, what is it that you, as a young person, can do to create a dent in this scenario?

To begin with, why not use the power of social messaging to help create a demand for Universal Pension stronger, by lending your voice to the issue? Let’s make the authorities notice that the “demographic gift” this country, its youth, will not let their elders languish in neglect.

Tweet to us @HelpAgeIndia_ with ‘#IDOP2016’ and ‘#UniversalPension,’ and we will make sure your voices are heard.

Not every story has an inspiring hero. Sometimes, it is you, the reader, that has the power to become a hero and ensure societal change. Let’s give our elders their basic right to a dignified life. Just that, has the power to make you a hero in a forgotten life.