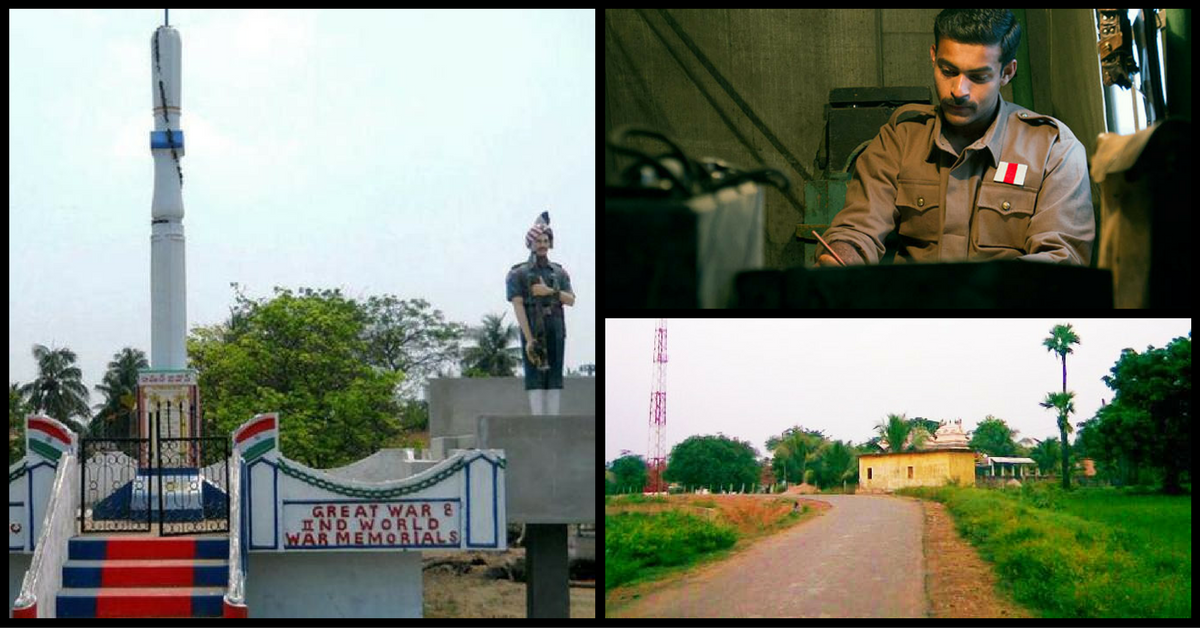 “For those who choose to fight, life has a special flavour that the protected will never know.” – Captain R Subramanium, Kirti Chakra

Were it not for the interesting backstory behind its imposing rifle and helmet war memorial, Madhavaram would be a relatively unremarkable village. Located about 150 kms away from Amravati, this tiny village in Andhra Pradesh’s West Godavari district has an illustrious 300-year old history of sending its men to serve in the Army.

Almost every household in this small village has at least one member serving in the Indian Army. Some even have as many as four. In fact, right now, there are 109 individuals (65 in the field and the rest in administrative posts) from this village serving in the army!

In Madhavaram, local lore revolves around tales of war and valour, and over a hundred families in the village proudly display war decorations won by their members. The ex­-servicemen of the village do not like being called their own name unless preceded by their rank at retirement. The local women prefer getting married to military men and even the children have names like Colonel, Major and Captain!

You May Like: This Amazing Woman Has Been Training India’s Special Forces for 20 Years without Compensation!

Madhavaram’s military history is matter of pride for its residents. The village was the defence base of Pusapati Madhava Varma Brahma, the 17th-century ruler of the Gajapati dynasty who presided over present day Orissa and the Deccan Plateau. The King, from whom the village derives its name, also established a garrison town in Arugollu village (6 kms from Madhavaram), where a dilapidated fort still stands today. To strengthen the kingdom’s defences, soldiers from Orissa and northern Andhra were brought and settled at the garrison towns of Madhavaram and Arugollu through generous gifts of land. Over the years, these soldiers and their descendants fought for many rulers of the region, such as Bobbili, Pithapuram, Palnadu, Warangal and Kakatiya (including Rani Rudrama Devi).

During colonial rule, 90 soldiers from this remote village fought for the British Empire in World War I. In World War II, the figure shot up to 1110.

The village also accords great respect to local heroes from history, such as Subedar Vempalli Venkatachalam, who was awarded titles like Rao Bahadur, Pallaki Subedar, Ghoda Subedar and the Victoria Cross Medal (the highest prize for gallantry in British colonies).

Subedar Vempalli Venkatachalams’s family epitomises the military tradition of Madhavaram. His son, Markandeyulu, is a decorated veteran of the 1962 Sino-Indian war, the 1965 Indo-Pak conflict, and the 1971 Bangladesh liberation war. His grandson, Subbarao Naidu, recently retired as a havildar in the Indian Army and his great grandson, Manas, has already been selected for military service. As his son, Markandeyulu, says,

“Service to the country is in our blood and it will continue forever.”

To commemorate the sacrifice and service of its soldiers, the residents of Madhavaram have built a war memorial on the lines of New Delhi’s Amar Jawan Jyoti.

Over the years, joining the Indian Armed Forces has remained the career of choice for the young men of the village. The news that the Indian Air Force has allowed women to fly fighter planes has made the village girls hopeful that the army will start recruiting women for field posts too.

Naga Vijaya Mohan is posted just 15 km from Uri, where a terrorist attack claimed the lives of 18 Indian Army soldiers recently. In an interview to the Times of India, his 64-year old father, an ex-serviceman, says

“Should anything bad befall my son, there will be the consolation that it was a sacrifice made for our motherland.”

A sense of pride and duty in her voice, Mohan’s mother echoes her husband when she says,

“Last time I talked to him was before the personal mobiles were seized by the authorities. I told him to be brave, strong and proud on the battleground.”

Interestingly, the Poleramma temple at the entrance of the village is revered by the families of Madhavaram. Residents believe that the blessing of the deity taken by the servicemen protects them in the battlefield.

Madhavaram also has a 1180-member-strong Ex-Servicemen Association. Most of the members have moved on to civilian life after retirement—they run small businesses, take care of their farms or have joined private security firms. However, all of them are keen about still serving the Indian Army, in whichever way they can. For example, helping with the transport and arrangement of supplies for the battleground.

As the proud ex-servicemen of Madhavaram like to say, they may have retired from the army in person, but not in spirit.

Madhavaram’s military tradition, and the pride it takes in serving the country, hasn’t gone unnoticed. The Defence Ministry has acknowledged the village’s contributions and decided to develop the village. The Defence Minister, Manohar Parrikar, will soon be laying the foundation stone for an Army Training Centre in Madhavaram.

To be established with support from BDL (Bharat Dynamics Ltd), the well-equipped defense academy will be a wish-come-true for the youngsters in this village, for whom getting into the military is the highest honour. Much to its residents’ delight, the village may also be officially renamed Military Madhavaram soon.

Military service in Madhavaram is as much a career choice as it is a way to keep a long tradition alive. Fascinated by its unique culture and history, Telugu director Radhakrishna ‘Krish’ Jagarlamudi made the national award-winning film Kanche based on this village.

Shree Ramanan, daughter of Urrika Seetaramaiah, an ex-serviceman from Madhavaram, has also produced a documentary on the village.