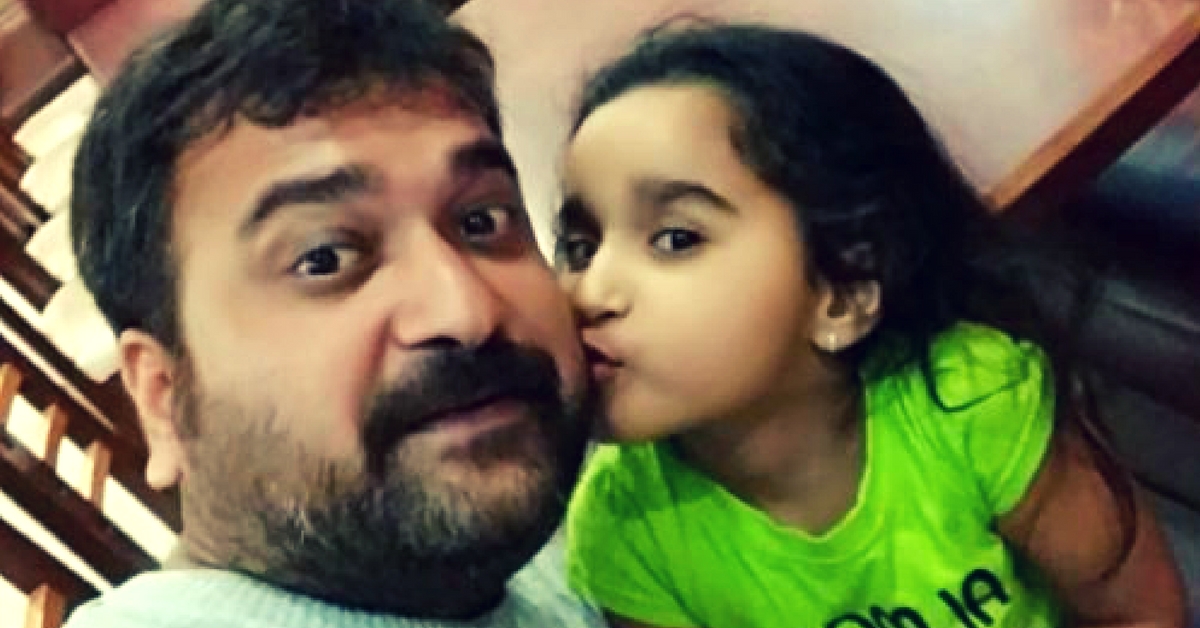 Having seen his sisters deprived of an education, this cab driver refused to let the same happen to his daughter. He now works two jobs and often sacrifices his sleep in his mission to educate his daughter.

We often hear depressing stories of inequality and the atrocities committed against women and girls. Rape and domestic violence are common terms often spotted in media publications and news. Right from child marriage to dowry demands and maternal deaths, women face innumerable issues. Their freedom of choice and education is often snatched away from them and they are left powerless and vulnerable.
While our patriarchal society has had a large role to play in this, there are exceptions to the rule. Here’s one such example where a man is defying all odds to support girl empowerment.

Gaurav Maniar, 34, is a regular cab driver who drives a private cab in Mumbai and also works as a marketing sales guy for LED lights and other electric fixtures.

Though one may think that there’s nothing extraordinary in working two jobs given that this is a very common phenomenon in big cities like Mumbai, Gaurav’s story is different.

On the subject of working two jobs, Gaurav says, “Driving a cab is not my only source of income. I work as a marketing executive part-time. It is a hard life and sometimes I even have to miss on sleep but I’m willing to do it for my daughter.”

Gaurav toils day and night only because he wants his 6-year-old daughter, Preet, to get the best education possible; he also wishes to send her abroad for further studies once she grows up.

Once again, one may think that he is only fulfilling the responsibility of an ‘ideal’ father. This, after all, is a very common occurrence, but there’s a twist to the story.

While many Indian parents often crave for a boy child, Gaurav’s views on this topic are different: “My parents made a grave mistake and I don’t wish to repeat the same. I have three elder sisters and my parents stopped only when I was born. I’m happy with just one child, so what if that child is a girl?”

Gaurav’s principles and beliefs are what make his story unique. He is not from a well-to-do family and hails from a orthodox background. However, he chose not to follow any of the rules that place women in a disadvantaged state. He may not understand the meaning of ‘feminism,’ but he embodies every bit of it.

After hearing the status of women in the country, he shares his viewpoint:

“I wish I could change the thinking and behavior of all men in this world. I wish women get equal amount of opportunities and there are no hurdles towards their progress.”

Gaurav doesn’t feel shy or scared to shun certain norms of the patriarchal society. He is of the strong belief that both genders must work hand-in-hand in solving this gender gap. He feels men play a pivotal role in changing traditional mindsets and also believes that every drop, or every man in this case, counts in the process of systemic change.

Dasra, a strategic philanthropy foundation published a report titled ‘Ladies and Gentle Men’ that explores the issue of engaging men and boys in women’s development in India. The report found that since men still largely control resources and social discourse, it is critical to acknowledge them as gatekeepers of gender norms and potential resistors of change in order to drive systemic changes in women’s development.

Similarly, if we have more men thinking on the same lines of Gaurav Maniar, we can expect a massive impact that will lead to the betterment of the society and provide dignity and respect to the women and girls in our country.

Dasra’s Girl Alliance seeks to create a world where girls are safe, heard and celebrated. For more information, click here.

About the author: Shrikant Ayyangar is a Communications Associate, Media Relations, with Dasra