This Ex-Ola Honcho Is Trying to Get the Govt to Fix Roads. You Can Help Too!

Ever thought about how great it would have been if you could know about the quality of a road before driving on it? Or if there could be some way for authorities to find out which roads they need to fix first?

Ever thought how helpful it would be to know about the quality of the road you plan to drive on before you get on it? Or how great it would be for the authorities to figure out which roads to fix first? There is a mobile application now to address these issues.

It is called Road MApp and it maps the quality of roads with the help of smartphone sensors. “The poor condition of roads and large number of potholes are things we all face and deal with on a daily basis. We crib about it almost all the time but there has been no scientific way so far to measure how bad a particular stretch on a road is. We have no electronic records to help us prioritise and let us know which stretch of road should be fixed first,” says Sudarshan Gangrade, the brains behind Road MApp.

You may also like: One Simple Solar-Powered Device Is Making Classrooms in Rural Maharashtra Super Exciting

The app automatically maps out bad stretches on roads and gives a colour coordinated map based on how good or bad the condition is. All users have to do is download the app and launch it on their phones. It resides as a background app and is switched on automatically when it senses the motion of the vehicle. The application then switches on all the sensors of the phone like the camera, GPS, compass, accelerometer, etc., which continue to sense all vibrations on the road throughout the commute. A set of sophisticated signal processing algorithms then take all the data collected by the sensors and remove noise and vibrations that are not related to the road. The outcome goes through another algorithm to distinguish between potholes, speed bumps and stretches of bad road. Finally, the app comes up with a score for the road and it is mapped accordingly. The algorithms also help the app differentiate between vertical and horizontal vibrations, which means that a car coming to a sudden halt on a smooth road will not be recorded.

When the car stops, the app is automatically switched off to save the battery of the phone. 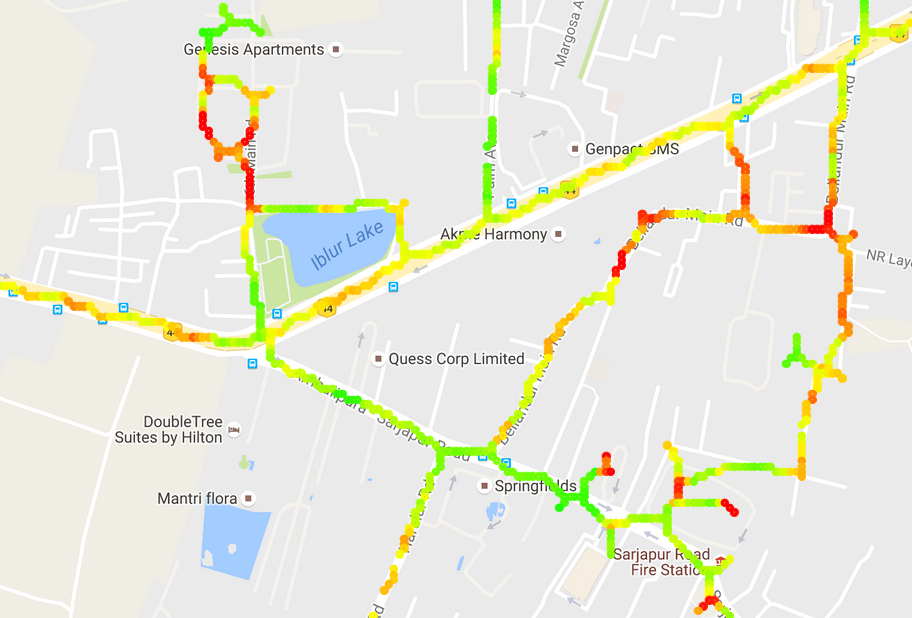 An MBA graduate from IIM Bangalore, Sudarshan has worked on the Aadhar Card project with Nandan Nilekani in the past and was inspired by the idea of using technology for delivering services to the public for social good. He was head of the marketing team at Ola before starting work on Road MApp with his friends who run a Bengaluru-based company named Lightmetrics.

The team plans to use the app to help the government fix roads. Currently, they are trying to create awareness in different cities so that each city has at least 3,000 app users. “With more people using it, it will be easier to get a complete map of the country in a shorter time, and in about four weeks we will be able to present the map before the government as well,” says Sudarshan.

“The smartphone is a powerful tool that is widespread today. Citizens who use public services talk about improving service delivery but don’t know how to contribute to the process. This app can be the crowd-sourced platform for various cutting edge technologies that help generate a hyperlocal view of the city. And the government can use it to know what the issues are. These could be places/stretches of road where there is a high probability of accidents, areas where streetlights do not work, and so on. Our view is that the app should leverage technology with minimal involvement of the citizens, so as to maximise the participation,” wrote the team on a Facebook post after the launch of the app this week.

You may also like: How Two Teenagers Are Helping People with Dyslexia & Visual Impairments Access the Web

You can download the app here and help the government mend roads.