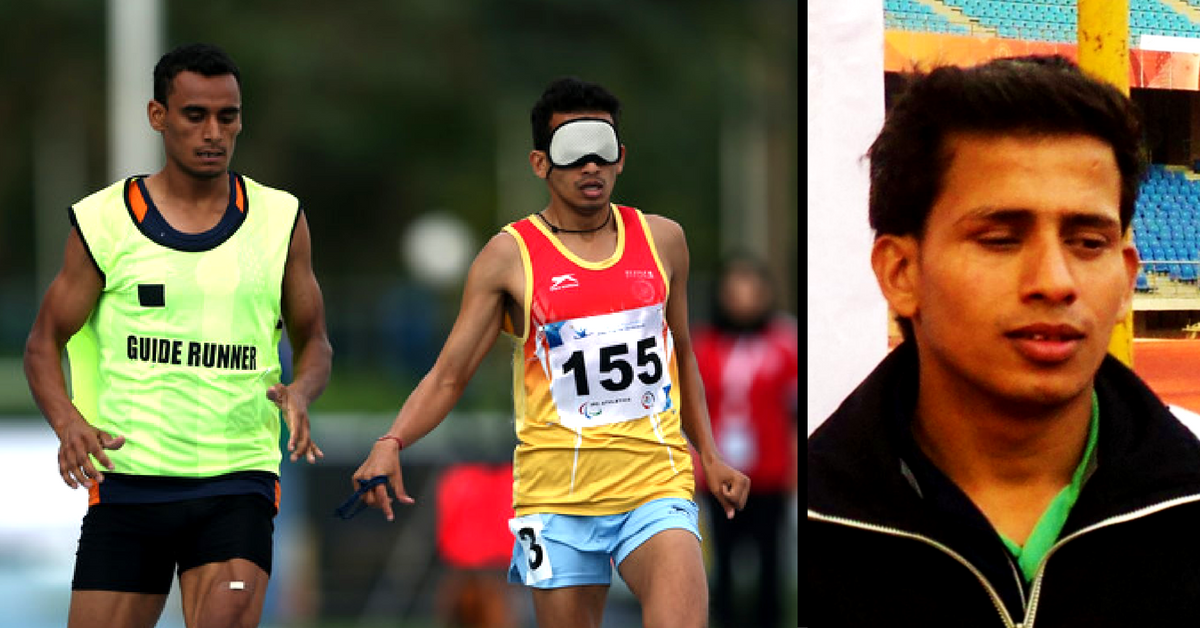 It is a little known fact that India’s first Olympic gold medal in an individual sport was actually won by one of India’s para athletes, Devendra Jhajharia. Devendra is an amputee who won the javelin throw event – his world record, set in 2004, is unbeaten even today.

The incredible and humbling achievements of such Indian para athletes show us that they are winners not just in sports but also in life. While every sportsperson has a desire to excel, para athletes have a special kind of resilience. Through their performances, they showcase to the world what can be achieved when testing your body to its absolute limits. Through their sporting performances that regularly redefine the boundaries of possibility, para athletes challenge stereotypes and transform attitudes, helping to increase inclusion by breaking down social barriers and discrimination towards people with impairments.

Here is the inspiring story of Ankur Dhama, who has been consistently winning medals for the country in Para Championships all over the world. A student of Delhi’s St Stephen’s college, Dhama competes in Track 11 category for the completely blind and, though he has no use for them, he sometimes wears a snazzy pair of glasses as a style statement!

Ankur Dhama was born in Baghpat, a small village in Uttar Pradesh, to a family of farmers. He started losing his vision gradually when he was 5 years old and by the time he turned 6, Dhama’s eyesight had completely failed.

“Doctors said it was due to an injury but I’ve no idea when that happened. I’ve been operated upon seven or eight times but my vision can’t be restored or even improved,” says Dhama.

On the suggestion of his doctor, he moved to Delhi and attended JPM Senior Secondary School for the Blind at Lodhi Road. With the encouragement of his sister, a physical education teacher, Dhama took to outdoor sports like a duck to water. He says:

“I loved playing cricket and would play the sport all day long with friends. Being the fastest in my group I was often asked to be the runner for the batsman, a role I especially enjoyed, along with fielding.”

At school too, Dhama was always active in sports. It was here that he first got to hear about the para games for the differently abled from the Indian Blind Sports Association. The Indian Blind Sports Association has been organizing national sports meets for the Blind jointly with Blind Relief Association (BRA) once every two years. Seeing his seniors participate in the event, which brought hundreds of enthusiastic blind sports persons from all over the country together at one place, motivated Dhama to join in as well.

Dhama has been running faster and faster ever since he began training in 2006. He first competed internationally while still in school. He won two golds—the first of many—at the World Youth and Student Championships in 2009. He was selected because, at the 2008 Indian Blind Sports Association’s National Meet, he won gold and set the junior records for both 400 and 800 metres. He covered them in 1:1 minutes and 2:25 minutes, respectively, breaking previous records of 1:3 minutes and 2:37 minutes.

After finishing school with commendable grades, Ankur enrolled in the prestigious St. Stephen’s College, while simultaneously pursuing his passion for sport. Talking about his college, Dhama says:

“St Stephen’s has been very supportive. My applications for attendance waiver and other permissions are cleared. And whenever I’ve asked for anything—adjustment in meal times or urgent leave, for instance—its been accommodated.”

But everything has not been smooth running obviously. Hailing from a small farmer’s family, it was impossible for Dhama to fund the frequent travel expenses of participating in world events.

Failing to find sponsors who would fund his tickets and his stay abroad, Dhama would have been unable to compete at these events if not for his coach, Dronacharya Awardee Satyapal Singh. Singh is the Sports Director at Delhi University’s Acharya Narendra Dev College, but he spends his mornings and evenings training para-athletes free of cost at the stadium.

“Training under Satyapal sir transformed my sports career. Not only has his training helped me improve my timing, he has paid the expenses for my equipment, diet, travel, and stay in several events out of his own pocket. I wouldn’t be winning medals for my country if not for him.”

As per the rules for blind runners in athletics, para athletes like Dhama are completely dependent on guides while competing. The guide runs alongside holding one end of a rope while the para athlete holds the other. He is not allowed to drag or pull but he helps the para athlete with directions and obstacles.

For Dhama, factors such as coordination with his guide, sensitising himself to different distances, getting used to equipment, and staying on track are just some of the things that are crucial if he is to win a medal.

“I have been lucky to find people, like my coach and guide, who are willing to help me selflessly. The guides, who are national level athletes themselves, don’t get the recognition for the win and I can’t afford to pay them for their help. They help me out of sheer goodwill and kindness and I thank them immensely for it. In their absence, I would be unable to compete in any event.”

Talking about the current state of para athletics in India, Dhama feels that there aren’t significant facilities for coaching or training. As someone who has been on the inside, he feels that despite consistent good performances, para athletes in India have no financial backing whatsoever. Very rarely do public or private organisations provides them with jobs as compared to able bodied athletes. There is still no official camp for the para-athletes. A 30-day camp is held prior to every international tournament where completely blind runners have close to 20 days to get used to shoddy equipment before competing against the best in the world.

On the other hand, able bodied athletes have a camp that lasts for 300 days of the year. Despite infrastructural and financial problems, the Indian para-athletics contingent managed to win six medals at the Incheon Asian Games.

“The Sports Authority doesn’t understand how big a task it is for a differently-abled athlete to reach the stadium itself, let alone the transportation cost of travelling everyday from home to college and then to training. We will continue to give our 120%, but even if the government gives us their 60%, we will do far better than right now.
My parents have always told me that whatever you do, do it with all your heart and that is what I am doing. So despite these hurdles, I will continue to participate in the sport, for myself and my country. But at the same time, I remember to pay attention to my studies as well. At the end of the day, I have to run my house and sports in India doesn’t always pay for that.”

The good news is that Ankur Dhama has recently found a sponsor in the GoSports Foundation, a not-for-profit venture primarily focused on the development of India’s best and most promising junior Olympic and Paralympic athletes. Through its scholarship programmes, GoSports Foundation is conducting Coach and Athlete Education programmes and conclaves aimed at improving the sporting ecosystem in India. Abhinav Bindra, Rahul Dravid and Pullela Gopichand are members of the advisory board of GoSports Foundation.

You May Also Like: TBI Blogs: This Wheelchair Tennis Player Hopes to Win Gold for India in 2020 Paralympics

With the 2016 Rio Para Olympics on the horizon, this year has been extremely important for Dhama. He is looking forward to striking gold at the Para Olympics and is certain that he will make a mark. Promising to give his 100% at the event,  Dhama says,

“Right now, I am running four hours a day to cover almost 30 kms each day as a part of my endurance training for Rio. I am also consuming a lot of fruits and proteins as instructed by my coach. This time, I have given it my all and feel that I have never been fitter before.”

Having recently graduated with a degree in History Honours from St Stephen’s, the multi-faceted youngster continues to excel in both sports and academics, turning in excellent grades while fulfilling the demands of a career in competitive sports. Truly an inspiration for the entire country, Ankur Dhama has a message for India’s aspiring para athletes.

“Being a para athlete may be difficult but it is not impossible. Enjoy the challenge, never give up and work extremely hard to train and compete for the country in your chosen sport.  After all, what’s the fun in doing something that is easy?

Also, I think fitness should be an essential part of everyone’s life and is especially important for people with disabilities. Not only is sports a terrific way of keeping yourself fit, it instils a sense of confidence in your body.

Of late, Indian para athletes have been competing in international competitions in different disciplines and winning medals for India. The future of Indian para-sports looks promising and I hope that our hard work and passion can take us to higher levels of performance, purpose and pride.”

It takes immense courage to participate in events across the world and Ankur Dhama has time and again overcome all odds to succeed. With just a few days left for the Rio Para Olympics 2016, here’s wishing Ankur Dhama all the very best. His next target after Rio? Winning the 5000m World Para Athletics Championship in London next year.