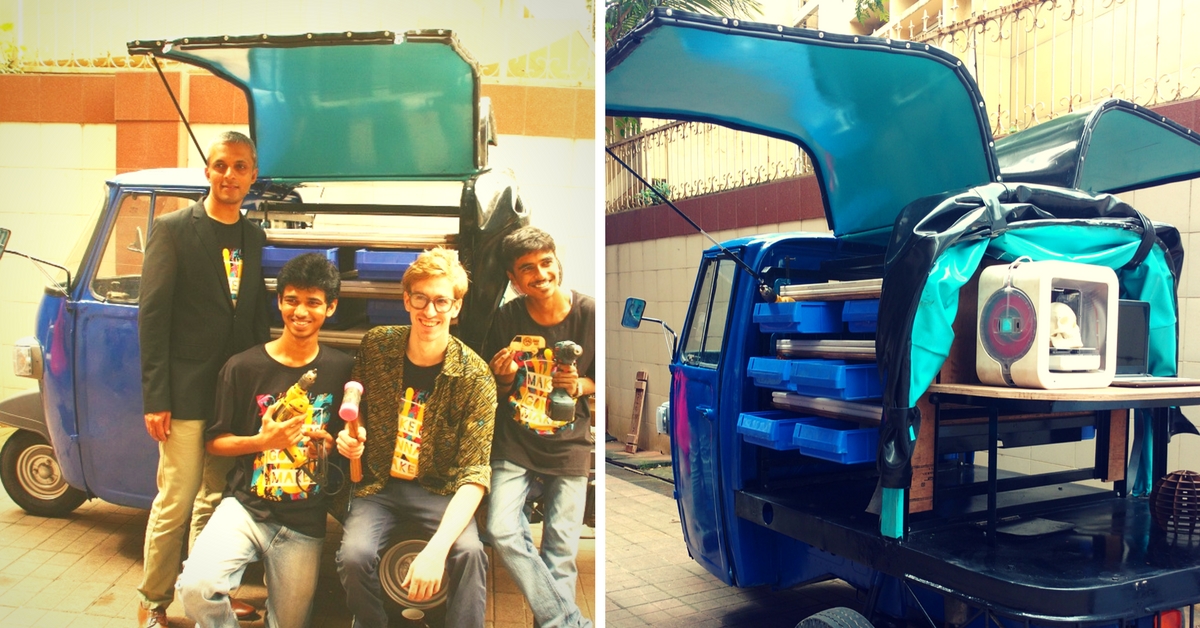 Someone using a 3-D printer here, someone else carving a wooden table there, a designer using a laser cutter in one corner, a group learning how to solder in another nook – welcome to Mumbai’s bright and happening makerspace called Maker’s Asylum.

Located in Andheri’s industrial district in Mumbai, Maker’s Asylum was founded by Vaibhav Chhabra in 2014.

It can be described as a collaborative workspace and playground for engineers, doctors, artists, academicians, healthcare professionals, and others to come together and give shape to their ideas by making whatever they want. It is a place for hardware entrepreneurs to gain access to high-end tools and work on their projects, for hobbyists to explore and tinker, for artists to exchange ideas and improvise their designs, and so much more.

Recently, the team behind Maker’s Asylum came up with a brand new idea that is not only fascinating and unique, but will also take the workspace directly to the people. It is called the Maker Auto.

This is a refurbished three wheeler that will serve as a mobile workspace to encourage hands-on making and tinkering. The auto has gull-wings, which, on opening, reveal an array of shelves stacked with advanced tools including a 3D printer.

“The basic thought behind the auto was that the tools at Maker’s Asylum are limited to just one place right now. We wanted to take some of these tools out to the streets of Mumbai, to areas where people would want to innovate and create. The auto will be the medium with which we can do this,” says Allan Rodrigues, advisor to Maker’s Asylum. The team bought a three-wheeler and completely refurbished it to come up with this innovative design.

Maker’s Asylum has a programme called Makers in Residence. People who want to work on larger projects that take about three or four months are registered under this programme and are provided with space, tools, and expertise to work on whatever they are making. They are sometimes also backed by sponsors. The Maker Auto was one such project that came to completion in partnership with Auto Desk. Designer Coby Unger, one such Maker in Residence, designed the auto.

He chose to work on an auto because the vehicle can be found in almost every city in India and reflects the vibe of the country.

Allan adds that the plan is to take Maker Auto to people and communities by partnering with different NGOs, schools, colleges, etc. The auto will go to different localities with expert facilitators who will conduct workshops on various topics. “These can be on anything – right from soldering and creating basic end-to-end circuitry, to using 3D printers and more,” he says.

“The maker movement started across the world around the 1960s and 70s – a do-it-yourself culture where you have access to tools, knowledge and experts – and you just make. The term ‘make’ here means build anything you want. People build things – from bird houses and tree houses to fixtures for their homes, etc. We never had that culture in India. We are used to the carpenter coming over and doing his thing, or going to interior decorators and telling them what we want. But still, there are a lot of people who want to make things themselves. That was the reason why Maker’s Asylum was set up,” says Allan.

This is also of course a place for people who might want to make heavy hardware products that need tools, which are not easily available everywhere.

Maker’s Asylum has a centre in Delhi as well. An interesting example of the creative work that goes on in this unique space is that of a recent collaborative project – an origami artist came together with a spray painter, an electronics engineer, a robotics engineer, and a mechanical engineer to build a replica of C-3PO – a humanoid robot character from Star Wars.

The Maker Auto will release a route map of the places where it will stop in Mumbai next month. People are invited to drop by, participate, tinker around, and have some fun!