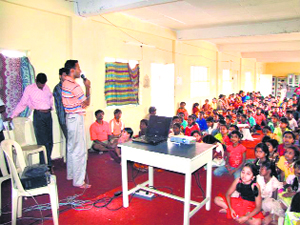 How much fun can Science be, you ask? Lots, if it is taught with the help of a simple rocket experiment and other practical applications! The techie duo of Udaya M V and Adithya B, who visit select government schools in Bangalore on weekends, do precisely this.

Both young software engineers who are in their early twenties realized that Indian students need to break away from the traditional mould of “mugging” and start taking a greater interest in their learning, with the aid of science projects. While educating themselves on the internet, they came across a demonstration on how to make Water Bottle Rockets. Taking off from that, they haven’t looked back. After successful programmes in six schools and a summer workshop as well, they are overwhelmed by the tremendous response. So much so that it has inspired them to create an NGO called Education Informal for improving the education process.

Handling everything by themselves, the two techies have so far funded their little experiment on their own. They do hope however that if they were to come across some talented student in need of financial backing, they will be able to source help.