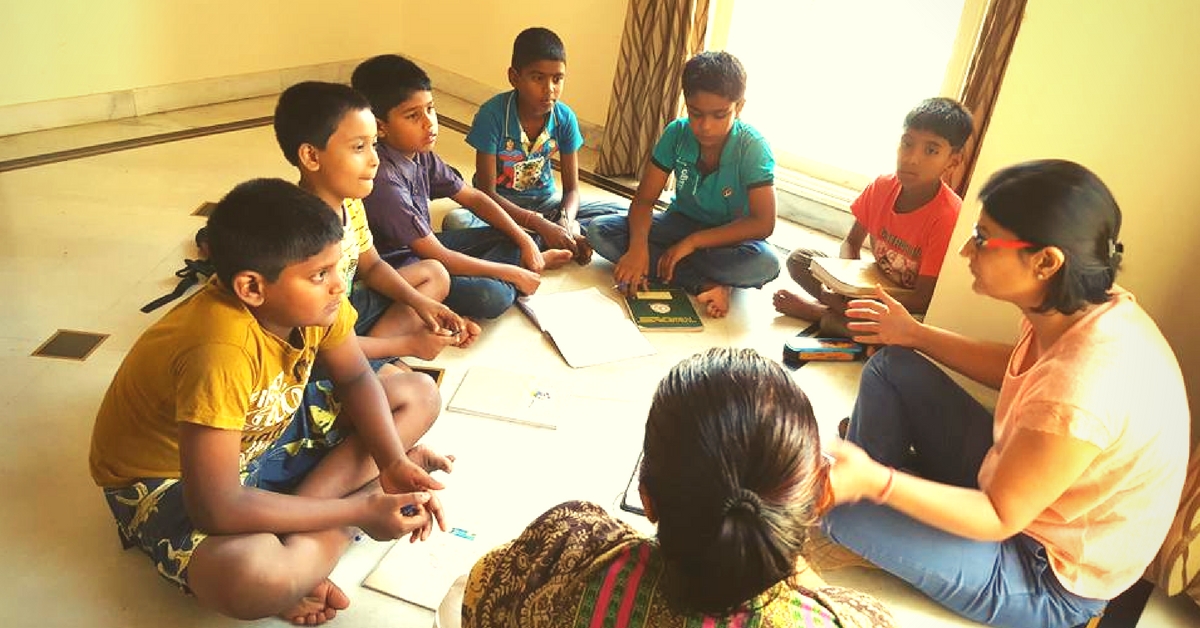 Every Sunday, the children of domestic workers in the Tata Sherwood residential society of Bengaluru come together for afternoon tuition classes conducted by the residents of the society. These residents are members of a voluntary group called SEE, which helps fund the annual school fees for children of maids, cooks, drivers, cleaners, and other helpers in the apartment complex.

As a group of eight active volunteers, SEE members refer to themselves as SEEkers and have expanded the scope of their work from just funding the kids’ education to teaching them too.

“It all started with an unfortunate incident in 2014, about two days before Diwali. We heard that a cook working in the society had collapsed at his home. His family took him to the hospital, where he was diagnosed with some severe problem in the intestines. The hospital estimated that immediate surgery would cost the family about Rs. 4 lakh,” says one of the volunteers.

Some of the society residents came together and started thinking of ways to crowd source this sum for him. They spoke to the hospital authorities, government agencies and also residents in the society itself, who turned out to be extremely helpful. One email on the society’s Google group and they collected a sum of Rs. 3 lakh in just 96 hours. Some other friends and family members also chipped in and the total amount finally stood at Rs. 4.5 lakh. The surgery was successful and the cook recovered soon. At the end of all this, some of the residents formed a group. The first item on their agenda was to figure out what to do with the money left over from the donations.

“After putting in a lot of thought on how the money could be used, we  decided to utilise it for the welfare of the domestic helpers working in Sherwood,” says the volunteer.

The group created a plan to collect more funds from the residents and pay the annual fees of children of all 150 domestic workers. The residents agreed and in the very first year they were able to collect enough money to fund the education of 40 children studying in Classes 1 to 10.

“We were happy but also concerned that what we had done was a somewhat lazy way of doing good. After all, it was just a month-long activity in a year and, more importantly, the money was paying the school fees but not necessarily helping the kids with their education,” says the volunteer. This was when the group decided to go one step further and conduct tuition classes for the children.

They met with the parents, learnt more about their needs, found out that most domestic workers were not aware of what their children were learning in school and how they were faring, and finally came up with a plan. They now conduct tuition classes on Sundays from two to four in the afternoons and teach English and Maths to over 20 children from Classes 4-9.

“None of us are teachers by profession but we try and keep the curiosity and excitement of the kids alive in the context of their school books. We are also trying to deploy modules for personality development, communication skills, etc. We are happy to see how the children are enthused about attending our classes,” adds a SEEker.

This year, the group again collected money and will be funding the annual school fees of 75 children. Another development is that they will now be teaching children from Class 10 as well. Additionally, some homemakers have came on board and they now conduct after-school classes for seven Class 10 students, six days a week – teaching all core subjects.

Other than the eight active volunteers, their are six more people who volunteer time whenever they can.

“Many people hope that they will do something somewhere that will change things. But in 99% of the cases, it just remains a hope. For us, this was an opportunity that we never imagined we’d get. And we are giving it our best,” says another volunteer.